Hullo there, a couple of weeks ago we went on Holiday to Gran Canaria. This is the first of a series of blogs about the trip, and is about our experiences of the hotel. 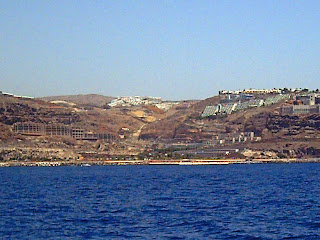 Playa de Amadores is approximately 10 minutes drive from the resort town of Puerto Rico. The transfer to our hotel seemed to take forever and ever, as we seemed to stop at about 10 hotels before reaching our hotel. We arrived on the island at about 20 past 8 in the evening, but did not get to the Mirador Del Atlantico Aparthotel until about 10 to 11. When we arrived the place seemed to be deserted. We were hungry, tired (my partner had medicine to take) and nowhere was open for a late night bite to eat. 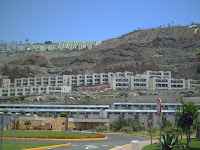 First impressions were not good. Our room had no Air conditioning, our beds were lumpy (the mattress comprised of 2 mattresses, a thick hard one and a thin soft one on top), and had poor quality sheets. I think we would have had a better sleep had these two deficiencies 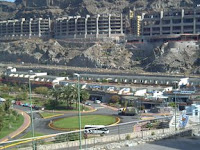 not conspired to make it more difficult to get to sleep which then make it difficult for us to get up!

The pool bar was ok, however as is the case on “Mainland” Europe, some things are bizarrely more expensive than at home. A small Pepsi Lite cost not that much less than a pint of the local Lager, a brew called Tropical (which was rather nice). We were also annoyed at the hotel closing the restraint and having a pool-side barbeque… 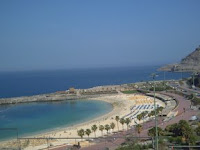 One of the really good things about the hotel though was the entertainment, provided by Becky & Leanne, the best hotel entertainment that I certainly have come across. On the Tuesday night they had “top” hypnotist Peter the Great (pronounced Pe-Toor!). We were talking to this couple, just generally making chit chat, talking about hypnotists, and feigning ignorance of Pink Floyd (steam coming out of girlfriend’s ears at this ignorance I might add!) when Pe-Tor! started the lapdancing skit. He had 3 ladies, who were to imagine that they were hunky guys, and they were to give a lapdance to as many girls as they could find. He also had 3 guys, who were three gorgeous ladies. They too were to give as many lapdances as possible, this time to as many blokes.

I mention this on 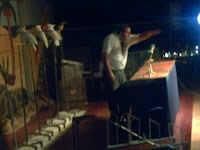 e because I looked round at this point and saw this large guy running towards me, at which point I thought “Oh

There was, most nights Bingo & Karaoke too, my Girlfriend did 2 songs on the Thursday and finished off Sunday night with a rendition of “Big Spender”! She was superb, as always.

See you next time!

In the end was it a good hotel or could you find any better ones? but from the things you tell i would stay in that hotel just for the entertainment!