I was going to write about Sach’s-gate, but decided that firstly I had said all I was going to say on the subject commenting on SNPTactialvoting and Tom Harris’ blog and secondly because Brand’s resignation from Radio 2 will take some heat out of the situation. 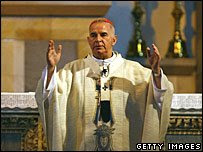 The Third reason, is that I have come across a more offensive remark, uttered by someone who really, no really, should know better. Yes step up Cardinal Keith O’Brien, leader of the Scottish branch of the Flat Earth Society. What, you might think I more offensive than leaving offensive messages and suggesting that you/your mate has slept with one of your grandchildren. Well judge for yourselves as speaking about the Human Embryology Act, currently going through the Houses of Parliament, he said…

"The grotesque implications of these procedures are utterly horrifying and fly in the face of all medical guidance on consent to research."

He also went on to compare the “procedures” to "Nazi-style experiments”. For someone who believes in alleviating the suffering of man-kind, to compare the 21st Century technology involved with stem-cell research, which has the potential to open up a front in the fight against the degenerative diseases like Motor-Neurone, Multiple Sclerosis or Parkinson’s as well as more well known conditions like Cancer and Heart Disease to the application of technology to further the Aryian race, which included the systemic destruction of anyone different to the Nazi’s, most famously the Jew’s, its just warped.

Cardinal O’Brien admits that his comments were made to court publicity, well I hope people hear his comment’s and think what a hypocrite for a man who is supposed to promote the human spirit, to try and deny 21st century medicine to our ill people, and to justify it in the sickest of terms.

One question though, if 18000 people complained, to the BBC, to OFCOM about Brand and Ross’ teenage snickering, who do I complain to about O’Brien. He who does not exist perhaps?
Posted by Allan at 20:59