There are a few things which tell you that summer has gone and winter is rather depressingly around the corner, the football season starting, the end of whichever test series England are playing in, and lastly the start of the Conference season.

Last week saw the Trades Union Congress annual conference, which was hijacked by our dear leader’s string of profanities and constant use of the C word during his speech to conference. They seemed to attract a lot of criticism from sections of the blogosphere for being unrealistic with their aims and with their attempts to critisise Brown and Cameron’s my cut is bigger than your cut style of debate. However, because the majority of workers in the public services have been able to preserve their quality of life, this should not be used as a stick to dumb down general working conditions, rather that we should be looking at why conditions in the private sector are so poor in this country. Just a thought but one borne of exasperation at the constant re-running of the 4 Yorkshire men sketch anytime public services crops up on the BBC’s Have Your Say strand. 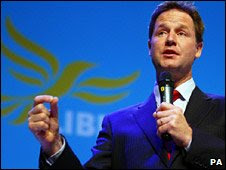 This week sees the first of the proper political party conferences, when the Lib Dems gather in Bournemouth. I am quite happy to admit that I have voted Lib Dem in several elections. However for the forthcoming Election it is looking doubtful that I will be voting Lib Dem.

The main jump the shark moment for the Lib Dem’s, and I suspect that this is the case for many people on the soft left of the political spectrum, was the coup against Charles Kennedy. After that they have struggled to fill the void in terms of ideas and presentation. Kennedy’s successor, Menzies Campbell, was an advocate of the war in Iraq and argued against the stance Kennedy took. When he took over, he tried to carry on Kennedy’s position with regard to the war in Iraq. Campbell was also called to be the bridge between the old social democratic wing of the party and the new “Orange Book” wing – who believed in liberal economic policies.

It’s maybe a sign of where the Lib Dems now see themselves that when Campbell stood down in October 2007, his successor was not one of the old guard from the “social democratic” side but someone from the Orange Book wing of the party. It is a path which if the polls are correct, will not bring electorial dividends. The Lib Dems are averaging around 18% in the polls, which translates into about 40 seats in an election, a loss of 20 seats.

With the economic difficulties set to continue, and an election due to be fought with this in the background, it is somewhat dispiriting to hear Nick Clegg join the big boy’s who’s dick is bigger competition with regard to cuts to public services. What we really need is new ideas on how to fix the country, ideas the Lib Dems used to provide before they became the orange Tories.
Posted by Allan at 20:25