Tale Of The Tape: Scottish Election 2011

The votes have been cast, the announcements have been made, and at the end of the day history has been made.  At around 2:30pm on Friday, the SNP won their 65th seat, which meant that they had a working majority of 2 over all other parties. 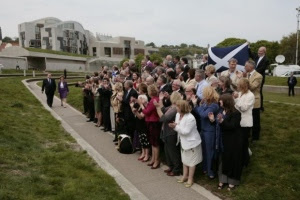 They finished with 69 seats, which means that they will enjoy an overall majority of 10 seats over all the other parties.  A total of 902,915 people (238,688 more than 2007) voted for the SNP in the first past the post seats, this helped them towards their total of 53 FPTP seats.  In the process, the SNP gained 32 FPTP seats on a swing of 6.25%.  The factor that pushed the SNP into majority government was the way the list seats were allocated.  Here the SNP gathered 876,421 votes which translated into 16 additional seats.  That amount of votes is a record for the list system in Scotland.
Labour fared badly.  They gathered 630,461 votes for the FPTP seats, down by 17,766 on their 2007 performance.  Yes, the Labour vote did go down.  You might have missed that on Friday with Labour figures saying that their vote held up, but not only did it go down, but it continued the trend stating in 2003 that has seen the Labour vote drop at each election.
The second list vote fared no better shedding 71,856 votes on their 2007 performance.  Again the point needs to be made that the Labour vote has gone down here.  The second point to be made about the argument that “our vote held up” is that the comparison is being made on another poor performance by Labour, 2007 is the election that Labour lost power and finished behind the SNP.  In short they failed to pick up in significant numbers any disillusioned Lib Dem voters.
The Tory vote also fell, for FPTP seats by 58,901 and for List seats by 38,038.  This translated into a loss of 5 seats on their notional position.  However the Lib Dem’s were the part of the coalition that fared the worst.  Over half of the voters who voted Lib Dem in 2007 deserted them on Thursday, as they shed 9 FPTP seats.  For the Labour figures who claimed that the Lib Dem vote transferred straight to the SNP, the swing away from the Lib Dems was 4.1% - less than the swing to the SNP.  For the list seats they fared worse, with 127,199 voters deserting the Lib Dems.
For the SNP, they have a little bit of prep work before the Scottish Parliament re-convenes & Alex Salmond can formally begin his second term as First Minister.  For Labour and the Lib Dems they have an awful lot of work to begin if their shattered parties are to be rebuilt.  The Tories, despite the drop in vote can be quite happy.  They did not suffer like the Lib Dems did here, or in the Council Elections in England – indeed they made modest gains.  They even saw the AV referendum vote go decisively their way (67.9% to 32.1%).  Make no mistake, at a UK level, the winners were Cameron & his Tories.  Which makes me wonder whether we will see a Westminster Election sooner than we think?
Posted by Allan at 19:59

Thanks for this post. I am trying to make sense of the argument that is being put that Labours vote 'held up'.

From your post here that doesn't seem to be the case.

Do you have a total for the list votes over the years like you do for the constituency votes?

For the evidence at constituency level just shows, well for me at least, a party in decline.

I'd like to get to an understanding of whether or not the SNP gained exclusively from switching Lib/Dem voters or not. I suspect what happened is more complicated, that some Labour voters switched to the SNP, and some Lib Dem voters went to Labour rather than the SNP.

It kind of destroys their unity thesis if it is right.

Douglas, as requested the list votes for Labour were as follows...

The easy answer to the question about the Lib Dem vote is that the SNP benefited from everyone's vote going down. I think, and i'll need to look at this further to clarify this, that about 2/3's of the SNP rise can be attributed to the collapse in the Lib Dem vote.