Or Leaflet-watch part 4 (and depending what comes through my door today, the final part).

One of the gripes that certain SNP bloggers have had about the Lib Dems is their tendency to put “Only The Lib Dems can win here…” or words to that effect on leaflets where they might be second.  They have ditched this for their leaflet for this election.  Wise choice as they finished behind the SNP in third four years ago, and sank to fourth in last years General Election (obviously winning my vote was a curse…). 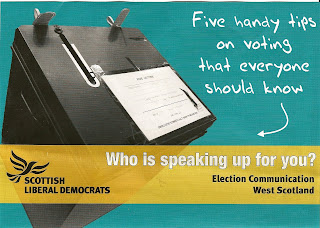 The theme to this address is “Who is speaking up for you”, yet in a similar vein to Labour’s leaflet vague promises are flagged up with no detail.  For a party who’s selling point has been their pledge to fight against the merger of Scotland’s 9 police forces, crime features third in their list.  To quote “We will keep your police local – no national police force!  We will make offenders pay back the community for the damage they have done to our neighbourhoods.”  There are similar vague pledges concerning jobs and education.
Over 4 pages, there is astonishingly little.  Even more astonishing is the thought that the Lib Dem’s potential vote winner this time around – opposition to the proposed merger of Scotland’s police forces – is relegated to the above 3 lines on page 2.  Once the post mortem on the Lib Dems projected poor showing tomorrow begins, it should start not with Nick Clegg, but with the vacuum that is the Lib Dem’s piss poor manifesto.
Posted by Allan at 10:59