Taking The Jewellery While The Corpse Is Still Warm


People say that the Tories are ruthless towards their leaders, but the speed that Blairite leaning Labour politicians turned on Milliband is breathtaking to say the least.  Mind you, when you see Peter ‘Dripping Poison’ Mandleson all over the television giving his views on where Miliband went wrong, you suspect that Milliband was right to keep Mandleson as far away from the campaign as possible.  Blair on the other hand should really have kept his opinions to himself. 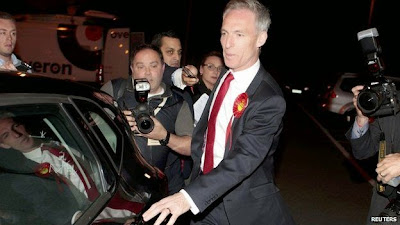 The synopsis of many of the Blairite critics of Milliband is that his leadership was too left wing and said nothing to aspirational Britain.  They are right in saying that nothing was said to aspirational Britain.  But Miliband too left wing?  There were left wing policies there, like reviewing the energy market and on taxation.  Economically speaking though, Milliband fell between two stools, not helped by not formulating a viable alternative to Osborne’s scorched earth.  Lets not forget as well that Milliband’s Labour party were fully in favour of TTIP.

Milliband fell between looking leftwards, which is where the 50% tax rate & the scrapping of the Non Dom’s came from, and looking at the centre ground – adopting scorched earth.  Arguably Milliband’s slow getting to grips with the position of leader of his party cost him room for manoeuvre as the Osborne narrative – it was Labour’s fault because they overspent and austerity is the only way out – became perceived wisdom among the electorate & media.  If anything Milliband wasn’t nearly as bold or as communicative enough with his policies.  Even if, overall, Milliband had a decent campaign.  Something I may return to at a later date…

One person who did not have a good campaign whatsoever was the ‘Scottish’ Labour leader, Jim Murphy.  There were three Labour policies on a Murphy compiled loop which showed their credentials as a ‘progressive’ party.  These were quickly drowned out by political ‘whataboutery’ when Labour looked to attack the SNP.  Labour attacked the SNP on full fiscal autonomy – which we don’t have.  Murphy also attacked the SNP because they didn’t rule out a second Independence referendum, despite Sturgeon, Salmond etc not actually promising that there wouldn’t be a second referendum.  Yip, they did say that this would be a once in a lifetime opportunity for Scotland, because the circumstances for another vote wouldn’t come around again for…  how long exactly did it take for Cameron to put his foot in it again? In any case, surely the result of the referendum meant that the Union is only on probation, right?

Murphy does have his supporters within Labour, Renfrewshire Council’s own leader Mark McMillan finds it hard to believe people could be so critical of Murphy after only 6 months in the job, conveniently forgetting that ‘supporters’ of Murphy briefed against and agitated for the removal of Johann Lamont (who?) in the run up and aftermath of the referendum.  Yip, I wanted Lamont removed too and yip I thought that Murphy would be an upgrade on Lamont & Gray.  If Umuna, Balls and Milliband had thought that Murphy had gone native when he pledged to spend the proceeds of the Mansion Tax on Scottish nurses, then his performance up here also shows he’s been south for too long.  His actions too as such keepers of the Blairite flame’s like McTiernan and McDougall were appointed to backroom positions within Murphy’s team.

Five, ten years ago, Murphy’s campaigning style would have been successful and borne fruit with 40+ Labour MP’s.  Now and after the referendum politicized a generation of Scottish voters, Murphy’s tactics fell apart consistently under scrutiny.  £8.00 in 2020, why not now.  You didn’t ban zero contracts before, why should we believe you.  Why is the 50% tax rate threshold at £150,000.  As Lallands Peat Worrier points out in brutal fashion, Murphy behaved like and campaigned as yesterday’s man.

Milliband’s actions on Friday (though if I was a Labour supporter, I’d have preferred Milliband to have stuck about & resigned at the conference to buy time for a proper debate within Labour) have thrown into contrast Murphy’s actions in refusing to resign.  Had Murphy shown any of the tactical nous and pragmatism of early Blair, the result could have been very different.  He has not & it could be argued that ‘Scottish’ Labour have fallen apart under his stewardship not just because of long term actions but as a result of his decisions.

I’d previously argued that ‘Scottish’ Labour might be looked at more closely by their head office.  Any organisation that loses 40 seats and a huge tranche of it’s voters would normally be under investigation and that’s after taking into account the conduct of some elected officials.  It may well be that cutting Scottish Labour adrift or making it a separate party under the Labour umbrella could be discussed in London. Scottish Labour’s issues will not have gone unnoticed.  Given the animosity towards Murphy from members of the Shadow cabinet, maybe if Murphy doesn’t go he might be pushed.

As the Blair cheerleaders line up to demand a return to the New Labour years of being relaxed about the rich & the selling off of our public services, they should bear in mind the success story reheated Blairism has been in Scotland.  They should also be reminded that there has been only two elections where the Labour vote went up in Scotland since the Tories last win – 1997 and 2010.  This leaves me wondering if Labour have an equivalent to the men in grey suits that used to tell Conservative leaders when to go.
Posted by Allan at 12:00

From Zero Contracts to zero, so to speak. Quite how Labour sorts itself out we do not know but it is going to be rough, and likely roughest in Scotland.

From Zero Contracts to zero, so to speak. Quite how Labour sorts itself out we do not know but it is going to be rough, and likely roughest in Scotland.