Obama And His 'Sermon On The Pound' Moment


It is a law of politics that even the shrewdest of political minds will come unstuck when attempting to traverse foreign or unfamiliar political landscapes.  Blair, for example, always kept an arms length approach to the murky world of Scottish Labour, instead coming undone, to the extent that it was the end of his 'imperial phase', in that most Labour friendly of places – the Women’s Institute.  Having commented on the Scottish Referendum, the US President, Barak Obama probably felt that he would be able to repeat the trick with the upcoming EU Referendum.  Not the smartest of moves… 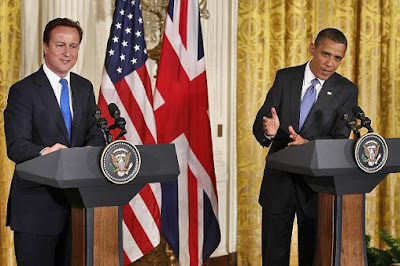 Friday saw Obama arrive on the UK leg of his farewell tour as President, it was already controversial due to the pre-announcing that he would be making comments as he did two years ago.  For some people, those comments two years ago were okay while his comments now were him sticking his nose into something he doesn’t understand.  The blatant hypocrisy of the likes of ‘Boom Boom’ Johnson, Fox and other foaming at the mouth right wingers were a sight to behold, as was the faux outrage at Obama’s supposed snub regarding the removal of the bust of Winston Churchill from the Oval Office.  Try telling the people of Dundee (indeed, anyone with a grasp of Scottish history who has studied the events that led to tanks in Glasgow’s George Square) that Churchill stands for democracy and freedom.

When Obama made his speech on Friday, the usual suspects rushed to their typewriters to claim that this was the big game changer – that the UK voting to leave the EU would see it’s influence markedly diminish and be forced to “the back of the queue” in terms of trade deals with the US.  No doubt pro-Europhiler de jour Alyn Smith was crushed in the stampede of Euro enthusiasts to rush to the television studios or laptops and tweet their victory.  There’s one small problem with that argument.

Many people who lived through the Scottish Independence referendum will remember an episode from February of 2014, when the Chancellor, his Shadow and the Lib Dem…  no I’m not sure of the best description for Danny Alexander either…  when they comprehensively ruled out any kind of deal with an Independent Scotland regarding the setting up of a Sterlingzone.  Granted, it was a rank bad idea anyway and most certainly not the best option had we voted yes.  Similarly, while the politicians were desperate to block off this proposal as something likely to happen, the currency markets would have forced Osborne, Cameron & Salmond to the negotiating table by close of play on the Friday.  At the latest.

It was Osborne’s speech in Edinburgh that categorically, in no uncertain terms, ruled out the UK government doing a Euro style deal with an Independent Scotland which turned the tide of the referendum… in favour of the nationalists.  It was almost immediately dubbed ‘The Sermon on The Pound’ by the Sunday Herald columnist Iain McWhirter, such was it’s dismissive, condescending & overbearing tone.  As Portillo pointed out on that weeks ‘This Week’ programme, it was sound economically to make the speech but was “Bad politics”.  The smack of someone representing something bigger than you coming to your part of the world and telling you that you can’t is not smart politics at the best of times, even more so when the message is delivered by someone so utterly toxic like Osborne. No wonder Scottish Labour are struggling to hold on to second place in Scottish voters affections, never mind pushing to get back into government for the first time in 9 years.  It’s a scenario which looks awfully familiar having been replayed again on Friday.

Someone representing something bigger than you (replace Osborne with Obama) coming to your part of the world to tell you that you can’t (replace Sterlingzone with trade and Obama’s desire to complete the TTIP negotiations) and you see the issue here.  There are two crucial differences though.  Firstly, it’s not Obama that’s the toxic figure here – more the currently in development hell deal that is TTIP that is the toxic mug of poison on the table.  Indeed, in spite of Obama’s threat, he remains relatively popular in this country, unlike say, the convicted fraudster’s 'friend' Boris Johnson.  Johnson’s jibe about Obama’s heritage has generally gone down like a bucket of sick and is the political equivalent of committing political Hari-kari on your own campaign.  Indeed, given the limited small but poisonous issues we have heard so far on the trade treaty negotiations, it is surprising to hear Gordon McIntyre-Kemp from the pro-Indy Business for Scotland group make claims about TTIP and the negotiating stance of the UK.  Claims unsubstantiated anywhere, thanks to the deeply secretive nature of the treaty.

The other difference is that Obama stuck around for more than five minutes, and gave interviews to news media and other outlets – there was an interview broadcast by the BBC yesterday for example.  In sharp contrast Osbourne couldn’t wait to get out of Scotland once he’d made his speech, blanking STV’s Bernard Ponsonby during his walk to his ministerial car.

The parallels to 2014’s independence referendum are becoming more and more striking, ‘Project Fear’ has already entered the common vernacular, with ‘pooling and sharing’ a key argument for staying in the union while Iain Duncan Smith accused the government of arguing that we were ‘Too wee, too poor, too stupid’ to leave the EU.  There was also a campaign asking pro-EU supporters to convince older relatives of the merits of the EU, in a striking parallel of Dan Snow’s ‘Stay’ set of publicity stunts.  Whether Obama’s speech will go down as the moment that clinches it for the pro-EU camp or becomes this campaign’s equivalent to ‘The Sermon On The Pound’ remains to be seen.  While this is playing out, dominating the Election campaigns to Holyrood & Cardiff Bay, any odds that Freedom Square will be the next Indyref thing to transfer to the European referendum?
Posted by Allan at 13:00