You know, I kinda suspect that our political parties, maybe more so than the electorate, are suffering from election fatigue.  This is the strangest Holyrood election campaign that I can remember, and possibly the one with the most certain outcome since Jack McConnell led Labour to a second term in 2003.  Certainly explains the lack of leaflets, though certainly the politicians have been out in force, judging by my heated debate (as Mrs Merton would call it) with Mark McMillan a couple of weeks ago. 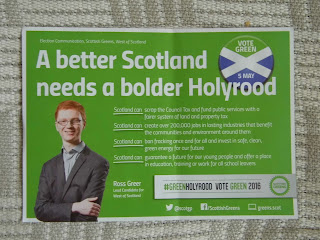 The first leaflets through my door (if you discount Scottish Labour’s ‘newspaper’ styled sheet) came from the SNP and the Greens.  The SNP one I will write about at a later date, in the meantime we’ll focus on the Scottish Greens attempt at grabbing my vote by having a candidate who looks as if he should still be at school.

That’s not actually a dig at Ross Greer, it’s more that I’ve noticed more and more how young politicians are becoming.  What they used to say about policemen is now true of politicians.  That’ll be the pitfalls of leaving my thirties behind and entering curmudgeon-hood last year.  Whether Greer will be as good as Mhari Black remains to be seen, I hope there’s a hustings event before polling day next Thursday.

What is striking about the Scottish Green’s leaflet is the ambitious policies highlighted.  Obviously more information would be needed as to how we can create 200,000 jobs in “lasting industries that benefit the communities and environment around them”.  Presumably this will be in the still underdeveloped (in this country) renewables industry.  Even more information would be required for the Greens guarantee of “a future for our young people and offer a place in education, training and work for all school leavers”.

Certainly the Greens are pitching to be, for this election, an ambitious version of the SNP.  The slogan “A better Scotland needs a bolder Holyrood” and the policy to scrap the Council Tax certainly underlines that pitch.  The surprising thing of course is not that their co-Convenor Patrick Harvie is a good media performer, but how well he has performed.  Especially as, I think, he bested the First Minister in the two televised debates at the start of the campaign.

My only quibble is the claim that “we can stay in and work to reform Europe”, which I think is not possible given the unaccountable and stubborn nature of the EU.  Having said that, at least the Scottish Greens recognise that there are issues with the current set up of the EU.