Hoping To Shake Up Holyrood


You know, I had intended to write about the SNP leaflet.  But that was before a couple of leaflets arrived that I hadn’t noticed before leaving to enjoy the delights of our National Health Service.  Without any irony, those leaflets come from Solidarity and from UKIP. 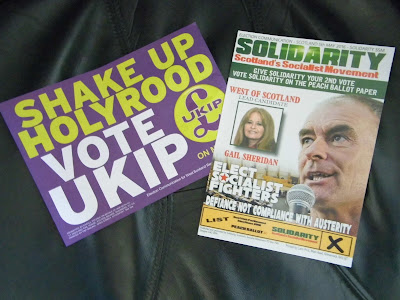 Yip, I know, UKIP standing for Holyrood.  Just doesn’t make any sense.  Even more so given the somewhat ‘tired and emotional’ interviews their sole elected representative in Scotland, the MEP David Coburn, has made. Just to underline this, the UKIP leaflet falls into the category of ‘general points and vague policy aspirations’.  In the vague policy aspirations column, you can put the pledges to “Put job creation and the economy first”, to “Open Technical & Grammar Schools” (even though the Grammar School tradition disappeared here in the 60’s and 70’s) and to “Look after veterans”.

Of course if this is an election, UKIP has to mention the EU even though there is a referendum on the horizon.  If I’m honest, I’m kinda perplexed as to why they have mentioned the EU here.  After all their brand of euroscepticism is a million miles away from the mild euroscepticism Scots have.  Immigration is certainly not the key driver for any form of Scottish euroscepticism, so for UKIP to deliberately conflate immigration and freedom of movement again makes no sense.

UKIP’s slogan on their leaflet is “Shake Up Holyrood”, yet the only party to have shaken up either Holyrood or the Mound was the SSP.  Their formally charismatic leader, Tommy Sheridan now heads a party called Solidarity.  Their leaflet falls into the category of ‘bullet point policies’.  With a long ‘Dave Spart-esque’ spiel about how #bothvotesSNP won’t work and asking…  no, begging the ‘Yes community’ to give Solidarity their second vote.  If memory serves, there might be one small problem with that.

Throughout 2014, stories emerged that members of the Women For Independence group were refusing to share a stage with Tommy Sheridan.  I think Natalie McGarry was the first to flag this up, but there were others.  Certainly the treatment given to Rosie Kane, Caroline Leckie & to Frances Curran by Sheridan in the aftermath of his, er, outing, explains the hostility towards Sheridan.  The book Downfall sets out the distinctly non Sheridan point of view of the events that led to the implosion of the SSP during the winter of 2004/5, and really shows how much of an issue Sheridan’s sexuality and his misogynistic attitude became.  While you would like to view parties as dispassionately as possible, it is only really team Sheridan that doesn’t view him and his vehicle as damaged goods – whether you’ve read Downfall or not.

With that in mind, his spiel can be seen as a cynical attempt to beg for votes from the so called ‘Yes Community’.  Even more so given his attempt to appear ‘women friendly’ involves Mrs Sheridan being the list candidate here.  You can see that with Sheridan’s policy positions, especially the pledge to scrap Trident and for Indyref 2 in 2018.  Ah, that touchstone of pro-Independence supporters…  and showing a lack of patience that certainly would harm the Independence movement.  Given Sheridan’s outlandishly blatant wooing of SNP voters, you’d have thought that he would have modulated his criticism of the SNP’s new policy to retain & tinker with the Council Tax when he pledged to “Replace Tory Council tax with fairer Scottish Service Tax”.

There is also two vague policy pledges on the leaflet.  Of course they are “Against Austerity” but there is no detail as to how they would balance the books or ensure that public services are adequately paid for.  The second one is the interesting policy to “Create public pharmaceutical company”.  I assume this is to ensure best value for the NHS and that Sheridan isn’t nuts enough to want to nationalise Glaxo Smith-Kleine.

For two parties that are seeking, in different ways to shake up the current Holyrood landscape, their leaflets (and indeed their whole campaign) have been utterly devoid of that missing factor of having something interesting to say.  UKIP’s campaign clearly is focused on June’s referendum, to such an extent that there is no attempt to understand the Scottish sensibility.  This does not however explain their poor performances on the stump and in interviews.  For Solidarity, they have the same issues regarding an inability to understand the Scottish sensibility – a sensibility which sees the cabal that leads Solidarity as damaged goods and something of a national joke.  Rather than shake up Holyrood, both UKIP and Solidarity have been as flat as two day old opened juice and have been as equally appealing.
Posted by Allan at 18:00