The Scottish National Party.  A Party that prides itself on being strong for Scotland and standing up for Scotland.  A party big on “Scottish solutions to Scottish issues”, even if it was Donald Dewar who coined that phrase.  But a party who’s whole campaign has had the air of being fought in second gear. 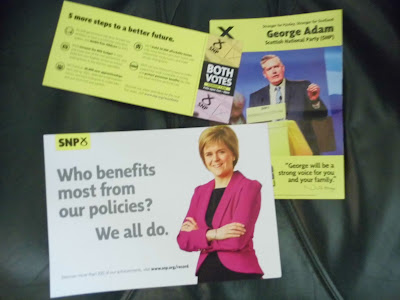 It’s not just that Sturgeon’s performances on the televised debates has not been as stellar as either her performances in the run up to the referendum, or in last years so called ‘Leaders debates’.  The leaflets I’ve received from the SNP have also tended to rely on what the SNP have done, not what a first full term for Nicola Sturgeon will bring.  For a party with as chequered five years in government as the SNP have had, that’s not the problem it should be.

The leaflet from the local MSP, George Adam, arrived first and bears no manifesto pledges (delivered the day before the manifesto launch).  It claims that the renovation of the Arnotts site, the electrification of the Paisley Canal line, the renovation of the iconic Russell Institute building and the rebuilding of St Fergus Primary can be attributed to the SNP government.  Yet there is no pledge to keep open those rumoured wards stated for closure at the RAH.

True, the SNP have kept open Monkland’s Hospital and other hospitals in Scotland.  It’s also true that the SNP have never (directly) cut health services.  But for such an allegedly media savvy political party, the SNP are making a meal out of an issue they could have closed straight away.  Instead of all the ‘scaremongering’ claims, Adam could simply have said that there will be no closures at the RAH.  Better still would be a pledge to focus on the quality and management of the RAH – still after 9 years of SNP government (and 8 of Labour led government) possibly the worst run hospital in Scotland.

Instead, the SNP leaflet gives us vague policy pledges which are all conservative to say the least – and very reminiscent of New Labour’s 5 pledges from 1997.  An aspiration to have world class education and double free childcare by 2021, increase the health budget in each year and build five new ‘flagship centres’ to reduce waiting times in key specialities, build 50,000 affordable homes, 30,000 new apprenticeships and protect pension benefits.  All vaguely impressive, but not really detailed enough.  And certainly not the radical prospectus that we all would have liked from a party very much in the middle of their own ‘Imperial phase’.

It is not as if there are things that the SNP could have genuinely radical policies on – scrapping the Council Tax and replacing it with LIT or some form of Land/Property tax akin to the Greens proposals for starters.  Maybe the UKIP (yip, UKIP) policy on electing people on to health boards could be looked at.  Certainly there needs to be a standards body for local authorities…  there are policies out there that the SNP could have looked at.  Certainly I may have mentioned one or two of the above last year when I pointed out that in post referendum Scotland, the SNP would have to change up and not coast through another five years, like they have done.

Intriguingly there are two big policy areas not mentioned on the SNP’s literature.  There’s no mention of another independence referendum and if that is likely to come in the next parliament.  More pressing for this election is the lack of any mention of the SNP’s plans for taxation and how those pledges are to be paid from.  We know they favour tinkering with the Council Tax rather than scrapping the thing and starting afresh.  The conservative option.  We also know that the SNP do not have plans to raise the top rate of income tax to 50%.  Again the conservative option.  The last income tax pledge is not to raise (until the Smith Commission powers become active) Income Tax rates – essentially to not bring in the Labour policy of raising income tax by 1% (which under the new Calman powers would be an across the board rise).  Again we see the SNP adopt the conservative option (but perhaps the correct one given the powers available).  That’s not to say the SNP’s policy prospectus is radical free.  There is to be a conscious decoupling of education from local authority control with the pledge to directly fund and provide more autonomy to schools.  While the idea, imported from Finland, of “Baby boxes” is a likable one.

With the polls showing a strong SNP lead, you would have thought that now would have been precisely the correct time to be bold and propose genuinely radical policies.  Instead, rather like New Labour (and this rather alarmingly looks like something from the New Labour playbook), the SNP have chosen safe conservative policy positions at every opportunity.  In pre-Referendum Scotland, only Scottish Labour would have gotten away with such a palid set of policy proposals.  Post referendum, the SNP can count on the unwavering support of the so called ’45 (or whatever they’re called) to give then largest party status.  It still doesn’t excuse a very conservative policy prospectus.
Posted by Allan at 18:00