You know, until recently I hadn’t realised that I hadn’t blogged about the SNP’s New Labour tendencies.  Even though it’s a phrase that I’d used before, possibly in the comments section of either the Better Nation or Planet Politics blogs.  With the SNP having won three elections in a row, now looks like the perfect time to look at the similarities between the current SNP and the New Labour project. 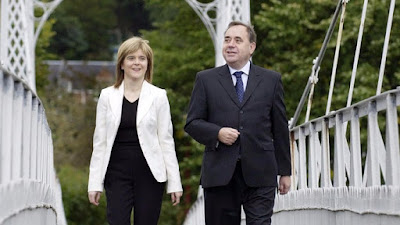 I had coined the phrase to describe the SNP under Alex Salmond.  Their canny (and successful) attempt to marry centre left policies with right wing pro-business and economic policies was the catalyst for this phrase.  However, the longer the SNP hold the keys to government, the more I suspect that this isn’t just simply an attempt at big tent politics, that both Salmond and Sturgeon are at the head of a party putting into practice it’s own New Labour-esque project.

New Labour itself was a conscious attempt to redefine big tent centre ground politics.  Yet for all that there was a groundswell of believers who occupied the right wing of Labour, the bright young things from Scottish Labour like Dewar, Robertson, Cook & Brown were all rooted in a social democratic version of the party, it was the Roy Jenkins influenced Blair who would become the figurehead of that movement.  Indeed the influence of the ill fated SDP wouldn’t stop with Jenkins as the likes of Andrew Adonis and Roger Liddell found new homes back in the Labour party as influential policymakers.

Where New Labour… failed… is that it did not offer a true balance of left and right policies.  The genuinely left wing policies came at the start of Blair’s time in office and were not nearly as ambitious as trailed, for example the minimum wage. These left wing policies gradually dried up as well as New Labour became a byword for centre right policymaking.  That policymaking, whether the rightward drift was intended or not, was itself driven by ideals and values of something dubbed “The Third Way”.  This thinking came from the advisors and political minds surrounding the American President, Bill Clinton.  “The Third Way” of thinking no doubt influenced Blair and Brown when they visited Washington in 1993.

What no doubt helped New Labour in the early years was being led by the most pragmatic and politically attuned politician…  probably since Harold Wilson.  Peak Blair, it could be argued, would be between his election as Labour leader in July 1994 to his run in with the Woman’s Institute and the Road Haulage industry in September 2000.  In that time, he was unsurpassed in his political acumen and tactical nous.  I say that as someone who always thought of him as the best leader the Tories never had.  What isn’t in doubt is that the way they, as a nominally centre left government, operated provides a template for other centre left parties around Europe.  By accident or by design, the SNP look as if they’ve been at least taking notes.

Where Labour have always been a left wing (to varying degrees) party, the SNP have always been a broad church, unified by an aim to make Scotland Independent.  They have always had a left wing element and a right wing element, though the right haven’t been in the ascendency since John Swinney ran a Holyrood campaign based on trickle down economics in 2003.  Therefore it is theoretically easier for an already broad church party to formulate a balanced policy prospectus.  Hence the pledges for funding for hospitals and the various other polices which reference Scandinavian thinking and values married to tax policies which reference Anglo-American thinking and a devotion to the cult of the Laffer Curve.

This form of policymaking has organically grown from within the SNP themselves and cannot be attributed to outside influences or overseas political fads.  The SNP themselves would baulk at the “Third Way” comparisons.  Though one or two members have, in the past, made comments which reference classic Clintonian Third Way-isims.  I can’t remember exactly who said it, but it was certainly in one of the Better Nation blogposts from the 2011 Holyrood elections where a member of the SNP claimed that in the modern Scottish political landscape, there was no such a thing as left wing and right wing politics.  This came back to me recently when the Business for Scotland chief Gordon MacIntyre-Kemp claimed that it was “Time to abandon the old constructs of Left and Right”.  If the comments from four years ago were Clinton-esque in tone, MacIntyre-Kemp’s piece is very Blairite in tone.

With the slow car crash that is the implosion within the Labour party still going on, there are opportunities for the SNP to stop taking notes and to learn lessons.  The biggest lesson perhaps has been in the handover of power from one leader to another.  Nicola Sturgeon is no Gordon Brown in the respect that she has never agitated for power in the manner Brown did.  However there is one aspect where Sturgeon is, rather remarkably, the heir to Brown - the ability to talk left and act right.  This ability was seen in evidence during the recent Holyrood elections where Sturgeon’s self styled ‘Application to become First Minister’ was all rather small c-conservative in nature.

That fiscal shift rightwards hints that maybe the SNP haven’t quite learned every lesson from the New Labour years.  That Labour lost popularity when they shifted from the centre ground and drifted to the right should provide a warning to the SNP.  Yet the populist left sounding campaigning has had an effect, losing them votes in the old SNP heartlands.  Both Swinney & Lochhead saw their majorities slashed while the SNP lost seats in Edinburgh, Aberdeenshire and the East coast – all pre devolution SNP heartlands.  There is of course another possible reason for the loss of those seats, that ‘no’ voters in the recent independence referendum have voted for other parties because of the SNP’s pro-Independence stance and not for any other policy reasons.  Whatever the reason for the SNP’s loss of support in those areas, it is true to say that any political project will be beginning to see wear and tear creep in.

The warning that both New Labour and the Conservatives can provide for the SNP is that the third term can be the most difficult of the lot.  With Labour & Blair, a reduced majority and an impatient Chancellor saw Blair only see out 2 and a quarter years of his third term – a term that was dogged by questions over Iraq and his obsession with increased security.  Thatcher also faced questions relating to how long she can go on for, and fared better than Blair – though she was forced out after several questionable policy decisions led to a loss in popularity. Already, though clearly the largest party, there are issues ahead that may cause trouble for the SNP – Labour & the Tories plan to scrap the Offensive Behaviour at Football Act (though this might be the subject of a diplomatic retreat in light of events at the Scottish Cup Final), The Greens plan for beefed up land reform and the Greens teaming up with Labour for tougher stance on fracking.  That’s before we mention the behaviour of certain SNP MP’s.

While both New Labour and the current phase of the SNP had different aims and different backgrounds, their attitude towards policy-making was similar and they had a similar thought process regarding left and right wing politics.  Policywise though, the SNP remain grounded in the Scottish centre ground.  I’d coined Mac-New Labour because the SNP had created a Scottish version of New Labour that was much more successful than the original.  9 years on from the election of Alex Salmond as First Minister, this is a model that still works, for how much longer though is anyone’s guess.  We might not have passed ‘peak Nat’ as some wag put it, but history suggests that this is the high-water mark of the SNP.
Posted by Allan at 13:00