Long time readers of this blog will know that one of the things this blog does is to look at and dissect election literature that comes through the door here at Dispatches towers.  The first piece of election literature to appear is something called “Paisley Voice”, extolling the virtues of Scottish Labour and their candidate for the seat of Paisley, Neil Bibby.  If the literature, and indeed Saturday’s campaigning outside the Piazza, are anything to go by, Bibby’s campaign will be centred around health and the (rumours of) proposed cuts to services to the Royal Alexandria Hospital. 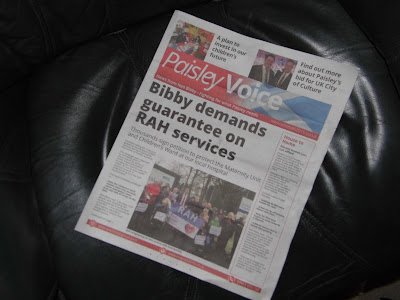 The largest part of “Paisley Voice” is devoted to health issues and the fight to retain services at the RAH.  As has been previously been flagged up, public services suffered most during the second SNP government due to their attention being on other issues.  This is the target Labour are clearly aiming at, with Bibby highlighting the threat to close or downgrade the children’s ward and Maternity Services at the RAH.  Indeed, when I..  er.. bumped into the leader of Renfrewshire Council, Mark McMillan, on Saturday, this was the line being pushed.  The argument that the SNP have cut NHS funding and that NHS funding has not risen at the same rate as funding for NHS England.

Of course there is a specific reason for this – that NHS England is essentially operating on a hand to mouth existence thanks to exorbitant PFI repayments and that the NHS in England wouldn’t be able to operate without the rises in spending.  Up here we only have the Queen Margaret in Edinburgh…  and that’s pretty much it in terms of English style PFI schemes within the Scottish NHS.  Of course the same can’t be said of our schools (and to be fair did not crop up in my ‘conversation’ with Mr McMillan).  Another time maybe…

This isn’t to say that Bibby, McMillan & co aren’t making valid criticisms of the SNP.  They are, and from what Mr McMillan was saying the ball is definitely in the court of Shona Robison regarding the proposed cuts.  It would be strange for an SNP government with a reputation for keeping hospitals open (one of Sturgeon’s first acts remember was to keep open Monklands Hospital) to now start closing wards & vital services.  Then again, Greater Glasgow Health Board are a strange beast anyway, centralizing A&E into the new Southern General Hospital and prioritizing Glasgow ‘overspill’ A&E in the RAH is not remotely the brightest of ideas.

However all of this comes back to what I was saying around the time of the height of #SNPBad-ism, namely that it’s all very well being critical of the government but you need to provide alternatives as to what you would do if elected.  While Saturday was mostly about ‘debunking’ the SNP’s claims to protect Scotland from austerity (and McMillan’s claims had the air of ‘he said, she said’ about it all without getting to the bottom of the matter), there was very little promotion of policies.  Thankfully some policies are mentioned in the “Paisley Voice” sheet.

I say some.  Dugdale’s flagship policy of an across the board 1% rise in income tax is not mentioned, nor is the preference for a 50% rate starting at £150,000.  I’d suspect that not mentioning this is a tactical error, given the number of left wingers critical of the SNP’s own rather conservative tax proposals.  Of the policies that are mentioned, the Warm Homes Act looks promising and a ban on rip off rent rises is welcome. The policy for building 45,000 homes for rent looks ambitious at best, given Labour’s record when they were in power. Regulation of bus services looks like a good policy too, however what is deeply unwelcome is the white elephant from the dying days of McConnell’s time as First Minister – Glasgow Airport Rail Link. While the pledge to “refurbish and build new schools” should attract further scrutiny in the light of what has happened in Edinburgh.

Observing both of the main parties on Saturday, the SNP looked like the most relaxed.  The Scottish Labour canvassers were easily the more animated and aggressive – when it looked like I wouldn’t sign their petition one of the canvassers quipped “So you want our hospital to close”.  Looking at Bibby’s task, that aggression is deeply unhelpful.  George Adam scraped home 5 years ago on a majority of 248.  With Bibby requiring a swing of 0.6% to reverse that result, Paisley will be 4th on Scottish Labour’s target list.  Like last years Westminster Election, the fight for the seat of Paisley is a microcosm of Labour’s problems & issues.  A campaign heavy on government criticism but light on policy initiatives does not feel like the correct campaign to fight for this election or is ultimately a winning campaign.
Posted by Allan at 12:00