The Most Dangerous Phrase in UK Politics

You know that there are phrases which reveal something about a persons thinking – a laziness even when some sort of conventional wisdom is dispensed by several commentators at the one time. However since the election, we’ve seen a response to that result which can be summed up in one phrase. It’s a phrase that can be justified as being the most dangerous phrase in UK politics at this moment. 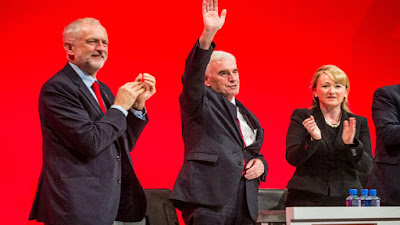 It’s a phrase that Labour leftists and Corbynistas have used in their conversations about what to do next. That is that all that Labour need to do is to make one more push and Corbyn will be the next (or next but one if the Tories change leader before the next Election) occupant of Downing Street. It is tempting to see UK politics through that particular prism, as notably Rebecca Long-Bailey (pictured left, with Corbyn & McDonnell) did at the weekend. It would also be an incorrect and potentially damaging prospectus.

Here in Scotland, we have seen the damage that such a complacent view can do. I barely need to remind you of the outcome of the Independence referendum of September 2014. Rather than see the outcome of a loss by 10.6% as simply a defeat, supporters of Independence... indeed the SNP hierarchy as a whole saw the result and the gains made as a reason to carry on with their arguments. The logic here is that if the arguments stacked up for 44 odd % of the country then all that’s needed is to keep with those arguments.

Of course things haven’t quite worked out that way. The SNP’s refusal to look at the defeat in 2014 to see what lessons can be learned smacks of arrogance. The thing that looks to have done for Independence though (at least in the short to medium term anyway) has been the SNP’s continued bad handling of EU relations. In rushing to put Independence on to a virtual table in the aftermath of the EU referendum, the SNP hierarchy may have been listening to what their supporters within the social media bubble had been saying, but out in the real world it was a move which looks with each passing day like a catastrophic tactical blunder.

Labour, on the other hand, are in a slightly different place from the SNP and Yes Scotland. For one thing, their loss could not be attributed to issues with policy, the performance of their leader or the economy. The thing that very likely cost them votes in June would be the 18 month civil war within Labour between the party’s left wing and it’s pro-Blair Progress group. At a Progress fringe meeting, the right wing Scottish Labour spokesperson Jackie Baillie made the point that “We lost the general election against the most shambolic Tory campaign I’ve ever seen – we can’t get away from that” without acknowledging the role that Progress minded MP’s played in undermining the public perception of their leader. Or for that matter the shambolic Scottish Labour election campaign which completely ignored Corbyn’s policies in favour of promoting, to borrow a phrase, ‘local champions’ and for trying to out Tory the Tories on the constitution. It is therefore somewhat dispiriting to see both candidates for Scottish Labour leader make this mistake. Again.

If the momentum (ho ho!) is with Labour, then that does not make them automatic shoo-ins at the next election. For one thing there are policy area’s that need tightened up. I’m not certain that O’Donnell’s grasp of the economy is as tight as it needs to be. I think Labour’s Brexit strategy has the look of being cobbled together by committee and should be a much sturdier compromise between retaining trade links, protecting freedom of movement and ensuring we leave the EU and it’s centralising undemocratic tendencies. I also think Diane Abbott needs to step up to the plate a bit more and show us all that she is a capable Home Secretary in waiting.

There is one policy area where there is a lot of work needing to be done – Scotland. It was Labour politicians (Progress wingers mind, but still...) who thwarted attempts by the SNP to fully devolve Benefits to Holyrood during the Smith Commission negotiations and it was Progress wing Labour MP’s who voted down SNP amendments during the resulting Scotland Act’s passage through the HOC. For Corbyn to say that Holyrood has all the powers that the SNP asked for is an out and out lie.

There are criticisms that can be made of the SNP government, their timid policymaking, their lack of grip in the act of government and their fiscal conservatism – Sturgeon may talk the talk but so far she’s not walking the walk. Instead the criticisms that Scottish Labour and Corbyn are making are as the SNP as facilitators of Tory austerity. This is an argument that does not stand up to scrutiny.

Why Labour are attacking the SNP lies with the results of June’s election and the SNP’s own collapse, which itself handed Scottish Labour a way back. Of the 64 seats Labour need to win, 18 are SNP held. Seven of those seats are highly vulnerable, with swings needed of under 1% to take those super marginal’s. My own MP, Mhari Black, is vulnerable at a swing of just over 3% while the winning line, the seat that would (if Labour take all the other 63 seats) put Corbyn into Downing Street would be Lisa Cameron’s East Kilbride, Strathaven & Lesmahagow seat. The swing needed for that to happen is the entirely achievable 3.5% (in sharp contrast, the Tories need 8 seats, and a swing of 0.25% to regain a working majority). It is why Labour need to frankly get better arguments and why the right candidate in the current leadership election for Scottish Labour needs to emerge and why it is now time for Scottish Labour to stop obsessing about an event (Indyref 2) that will not be happening any time soon. Scottish Labour’s leadership election is subject I will be returning to.

Momentum & Corbynism is a by-product of the collapse of The Third Way. However as the example of the last “mass movement” of UK politics showed, a failure is still a failure and issues will need to be re-examined and adjustments made. If the Tories are not to get away with their mismanagement then Labour simply cannot afford to make the same mistake that the “Yes” movement and the SNP made and carry on in the mistaken belief that ‘one more push’ will see ‘us’ over the line.