Following in the footsteps of Great Uncle Walter

"Alex McLeish has been named the new Scotland coach. Former Rangers boss McLeish has signed a contract until 2010 and succeeds Walter Smith who resigned to take over at Ibrox on 10 January.
McLeish, who recently turned 48 and won 77 caps for his country, said he felt "proud" to become Scotland boss. SFA chief executive David Taylor said: "We have moved quickly to fill the vacancy caused by the unexpected departure of Walter Smith." 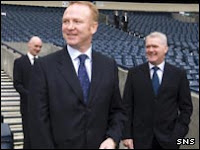 I think the first thing to say is that despite the doom mongers, I thing that this will be a good appointment. Sure the record that McLeish has had at Motherwell, Hibernian and Rangers is mixed. He took Motherwell to 2nd in the league in his debut season as a manager (the last team to split the Old Firm before Hearts managed it last season), but went downhill from there. Losing 2 of his top performers (McKinnon to Twente Enshnade and Lambert to Borrusia Dortmund) in Bosman transfers didn’t help.
After 3 and a half years he moved to Hibernian, who were relegated to the 1st Division within weeks of his arrival. A derby win over Hearts which was the beginning of the end of their title challenge was little consolation. In the 1st Division, McLeish built a fine attacking team around the talents of Russell Latapy and Frank Sauzee. Escaping the 1st Division at the first attempt, Hibernian continued to rise up the league. The high point of McLeish’s time at Hibernian came in 2001, when they reached the Scottish Cup final. Unfortunately, they were swept aside by a Celtic side going for their first domestic treble in 32 years.
Within 6 months McLeish had gone to Rangers, where he won his first silverware within weeks of joining. In all he won 2 League Championships, 2 Scottish Cups and 3 League Cups (including the domestic treble in 2002/3), not forgetting taking Rangers into the knockout phase of the European Cup, the first time any Scottish team has escaped from a round robin group phase. This is not a bad record considering that McLeish had to deal with the financial hangover from the Souness/Smith/Advocaat years. Money was tight to mention, and the team at the other end of Glasgow were in the ascendancy (O’Neill, in his time at Parkhead, had won 4 Championships, 4 other domestic trophies and had got to the Uefa Cup final) yet a good number of trophies were won despite the circumstances.
His task has been made difficult by the steady hand of Walter Smith over the past couple of years, who’s results have been miraculous. A 1-1 draw in World Cup qualifying against Italy, followed up by a 2-1 win over Norway in Oslo, topped by a 1-0 win over France in European Championship qualifying. The thing about this qualifying group is that it should have been about hot housing our young players, setting ourselves up for the next World Cup qualifying campaign. Unfortunately, our success now means the Scotland job is now about results. With away trips to Italy, Georgia and France to come, that makes results very difficult. Starting on March 28th when Georgia come a calling at Hampden.
See you later.
Posted by Allan at 22:03