The Best Brittish Band Ever! 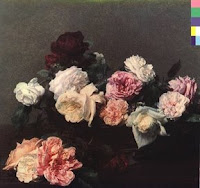 Hullo. I wrote this blog a while back, and somehow forgot to post it on this page. You may remember... ooooh it must have been February a blog about the Outstanding Contribution award at the Brits, where I listed who I thought deserved the award more that Oasis (or when I came up with the list the Eurythmics). I kind of ummed and aahd about whether I would put New Order into the list. Instead, I’ll just do a blog about them, even if there is already blog about them on some derelict space…

In 5th and 6th year we were allowed to apply for bursaries, which was a kind of student grant for people in 5th and 6th year at school (6th year is the last year at secondary school, the next level on is either college/university or the wonderful world of work) I got mine for 6th year, after loosing out in 5th year, and I did what most young people do when they get some money, spend it!


My first couple of albums were a couple of old Erasue albums and the Pet Shop Boys Discography compilation, late 1980s Electronica going firmly against the fashion of the time which was grunge and heavy guitars, most of my contemporaries were into, randomly, Iron Maiden, Gun's and Rose, Metallica and a new band frome Seattle called Nirvana. One day while in town I spotted a copy of Substance 1987, New Order’s singles compilation, and I bought it.


I had liked a couple of their singles, Blue Monday and True Faith, and I had also been a fan of singer Bernard Sumner’s side project Electronic. The mark of a great band is if you listen to something and think that I have never heard that before. I did that lots of times listening to Substance. “Everything’s Gone Green” (track 2) was the first to get me, sound of some sort of drum machine being switched on, then this mad twanging melodious baseline. The whole thing settles down for the first verse which ends with the chant of “It seems like I’ve been here before”. There is an instrumental break at this point before the second verse, by which time you realise that there is some sort of electronic noise beneath the sound of the gutars/bass and all the reverb cymbals.

I liked what I heard, so I bought some more of their albums, buying 1989’s “Technique” (left)about a month later, followed a few weeks after Christmas 1992 by 1986’s “Brotherhood”. Then Regret came out, it was and still is a great pop record. In the mean time, I got a bit into Joy Division, buying their Substance 1977-80 compilation.


I like them because the songs sound inventive, and so different to anything that had been produced before. They also pull off the trick of writing upbeat, sweet records about pain and heartbreak. The artwork for their records is also fabulous, from the day-glo of Technique to the fusing of the ancient to the modern in “Power Corruption and Lies” (top), which is repeatedly voted one of the best album sleeves of all time. They deserve to have a film written about them, and sadly “Twenty-Four Hour Party People” isn’t it.

They are up there with the Beatles, Stones, Kinks, Smiths, and almost any other band you can think of, past or contemporary.

What I love about them is that they make this wonderful, gorgeous music, and yet they don't appear to have the ego or bloat of many of their contemporaries (U2 comes to mind). They could've very easily had the success and fame that lesser bands readily grabbed, but Bernard, Peter, Gillian and Stephen chose to do it their own way. And their legacy is intact. Perhaps the best example is this: I know a lot of folks who hate U2. I don't know anyone who doesn't like New Order.