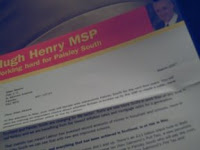 We am writing in response to your letter of March 2007 (pictured left). I note that unlike the SNP, you have not asked me for my priorities and issues which will decide my vote come May 3rd. In case you are interested, my open letter to the SNP will be of some interest. The overall tone of the letter is that I feel that, to quote an old advertising slogan, “Britain is not working” and to paraphrase your own leader, the union must “evolve or die”.

You say that Scotland and Paisley South is changing for the better. No it is not! The gap between rich and poor has increased and Scotland is collectively poorer than it was in the 1960’s. Sure, employment rates are high, but most people are working at rates barely above the minimum wage. Combined with low inflation rates and “historically low” mortgage rates, this creates a false economy built on debt and credit. When the bubble bursts, we will all be in trouble. Indeed, inflation is rising, mortgage payments rise with interest rates, but wages don’t – you do the math!

You say that New Labour has invested record amounts of money on schools and hospitals. You have done this using PFI/PPP which is effectively a second mortgage on these properties. Why does your party try to keep the true costs hidden from the British public, by ruling that these costs are “off sheet”? Is it because they would cast new light on the Chancellors record, and interfere with his prudence rules? Also, the NHS needs to concentrate more on helping those in society with illnesses and disabilities outwith their control.

Crime is a shared priority. However, your new laws are not working. Anti social behaviour, especially in adolescents, is still rife. As I said in my SNP blog, there are gangs of children drinking on a Friday & Saturday night. Why is that still happening? The parents must take a share of the blame, as must the politicians. There is a lack of things for teenagers to do, or where to go, especially when the parents don’t care. After all, did you not promise to be “Tough on the causes of crime” too?

In the face of all this, the Scottish education system is struggling. Yes, you have allocated more money for schools, but surely that must go hand in hand with supported employment options? Students are leaving school, with good qualifications, even degrees, but cannot get jobs! Our education system must evolve too, to try and engage with young people. Hope is a strong emotion, and one our younger generations are sadly lacking. Ambition needs to be encouraged, and sustainable employment must be a long term priority.

I also agree we need more police on the beat, but the police need to be trained properly & thoroughly, and taught that ordinary members of the public are not the enemy. Improvements in the police force do not require just more police, but better policing too, work smarter not just harder. Anything more than a speeding fine or a parking ticket, or publicity orientated crimes and the police are not interested.

You also argue against the SNPs proposal to change the way we fund local government. As you have recognised with the additional bands, the council tax is unfair, in that it attacks people’s aspirations to a good house. The way I see it, there are flaws in both of your arguments. Perhaps the SSP/Solidarity system is fairest, I am not sure. What I am sure of is that the present arrangement of financing Local Government is unsatisfactory, and does not provide value for money. There should be some sort of graduated ‘scale’, to ensure that those who can afford it pay more, while the poorest in our society pay less. The balance of wealth in our country needs to be addressed, as our ‘false economy’ slides into a sea of personal debt.

However, therein lies another huge problem. We have to address the whole section of our society who simply do not want to pay their way. Nobody, if fit to do so, should be allowed to not work and live on benefits. Single parents should do voluntary work, or build up ‘work credits’, learning a skill in order to work at some point. We need to encourage young parents that they need to pay their way too, not just expect the state to pay for their family! Addicts should be in recognised treatment programmes, if they want to continue receiving benefits. Parents need to take more responsibility for guiding their children – after all, they are the adults of tomorrow, and if they don’t learn social skills and self respect at home, what chance will they have? It would be a helpful idea to have every child of primary school age required to be in a sport or recreational club/group – this way they would learn social interaction and teamwork at an early age, meaning less problems as they grow up. Thus, we start tackling anti-social behaviour at ‘grass roots’ level.

We have a lot of other sensible, common sense ideas, and we are both in that almost forgotten group – the ’30 somethings’ - workers, voters, mature adults who care what happens to our country, and have good ideas on what you, our elected politicians, should do to help our country evolve. Perhaps if you can put the ‘political game’ aside for a minute – you might see our point of view!
Call it ‘constructive criticism’ from the electorate.

Yours sincerely
Allan Moore, 31 and Angela McCormack, 35
Posted by Allan at 20:15