Open Letter to the SNP 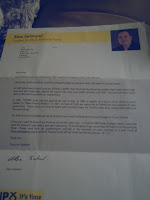 I write in response to your letter which I received last week. I am particularly taking up your invitation to let you know if your party is on the right track.

In 1997, there were several reasons why I did not vote New Labour, and I feel that some of these reasons may or may not be the reasons behind me not voting for the SNP come May 3rd.

At the moment, I feel that perhaps your party is conservative in its ambitions for what needs to be done. There are many things wrong with Scotland, but “Smaller class sizes, boost small business and create jobs, abolish the council tax, keep local services just that… and put more police back on the beat” only really scratches the surface. Also, I feel that your party may be too ‘business friendly’ You keep harping on about all the businessmen who have given you donations and support – concentrate on people like myself and my partner – we are the ordinary people on the street! I would like to think that our votes are as valuable to you as the ‘money people’.

My priorities would be a proper, free at the point of delivery health service, where all the doctors conduct themselves in a professional manner, in professional surroundings. Zero tolerance to violence and abuse is a necessity, but it cuts both ways – professionals should not be allowed to ‘abuse’ this protection! We want the patients to behave better, but who is monitoring the health professionals? Doctors and nurses can behave badly too. We deserve a quality health service. Lots of money is thrown at addiction services – yet we have situations where cancer patients have to wait for treatment – this is just simply wrong!

Public transport is another area that should be a priority. Paisley is Scotland’s largest town, yet public transport all but stops after 6:30pm. We are supposed to be more environmentally conscious, yet we are not encouraged to leave our cars at home, as public transport is so poor in many areas. I try to be socially responsible, yet the council cannot even empty my blue recycle bin when I use it!

Crime is another priority. “Tough on Crime and Tough on the causes of crime”, we should be hard but fair on criminals, as well as looking to eradicate the causes of crime, remove poverty, make underage drinking more difficult, and have more amenities for young people. We have neighbourhood wardens in Glenburn, but I still saw a crowd of teenagers drinking in the streets on Friday night and causing problems on the street. The wardens are not any more effective than the police at discouraging anti-social behaviour. Where are the parents? Do they know, or even care what their children are doing? The next generation seem to have no respect for anyone, and think they are above the law.

The law also needs to be less of an ‘ass’ too. There are too many vagaries and grey areas, which encourage criminal acts. The police are totally ineffectual – anything more challenging than a parking ticket or speeding fine they just aren’t interested. They seem to want people to choke our already burdened court service with things they could easily deal with.

As for the local council – what a group of useless, greedy people. Paisley town centre is sliding quickly into decline, while the council tell us they ‘plan to spend £7.5 million revamping it. Would it not be more useful to save it before it’s too late? Our 40 councillors spent almost a million pounds in expenses – while services are cut and council tax rises. This is crazy!

Another point – my partner and I are both homeowners and council tax payers. Yet the council will not assist us with anything, and make us pay for everything. We deserve the same consideration as tenants – we all pay our council tax! Indeed, they are constantly trying to find ways to make us pay more, like ‘management fees’ and ‘common charges’

The council tax system is totally unfair. I believe it should be largely based on ‘disposable income’, as should the benefits system. The system is still open to abuse. People should pay their way in society if they are able to do so. Why should I meet my drunken neighbour with his carry-out as I go out to work in the morning? Or listen to loud music and noise at night from a young, single parent on benefits, who has never worked, when I have work in the morning?

As you point out, in 4 years ordinary Scots have expressed their anger at the war in Iraq, their support to make poverty history (even if vulture funds will undermine this agreement) and their disgust at the thought of the next generation of American operated weapons of mass destruction being based not far from Scotland’s largest city, but we still feel ignored, patronised, belittled by “our betters” who come “north” and lecture us on what we should and what we shouldn’t be doing. These “betters” are the same people who have led Scotland backwards and have hindered our development. It is time to build a Scotland we can be proud of. I hope you find my suggestions helpful.

Yours sincerely
Posted by Allan at 18:51

Having read that post, you appear to be in whole-hearted agreement with the SNP's manifesto, even if you don't like the mention about business leaders supporting the SNP.

Well let me add some reassurance. I'm campaigning in Easterhouse and Robroyston to gain the trust of electors very much like yourself and your partner. I share your frustrations with how local communities are run. But one thing I do know is that if things are to change then supporting parties who are committed to your views is part of the solution.

Re-building trust in politicians after decades of abuse from mainly Tory and Labour parties will take time. But representative democracy does have to rely on us working together. Put your trust in the SNP at this election and judge us after we have been in power.