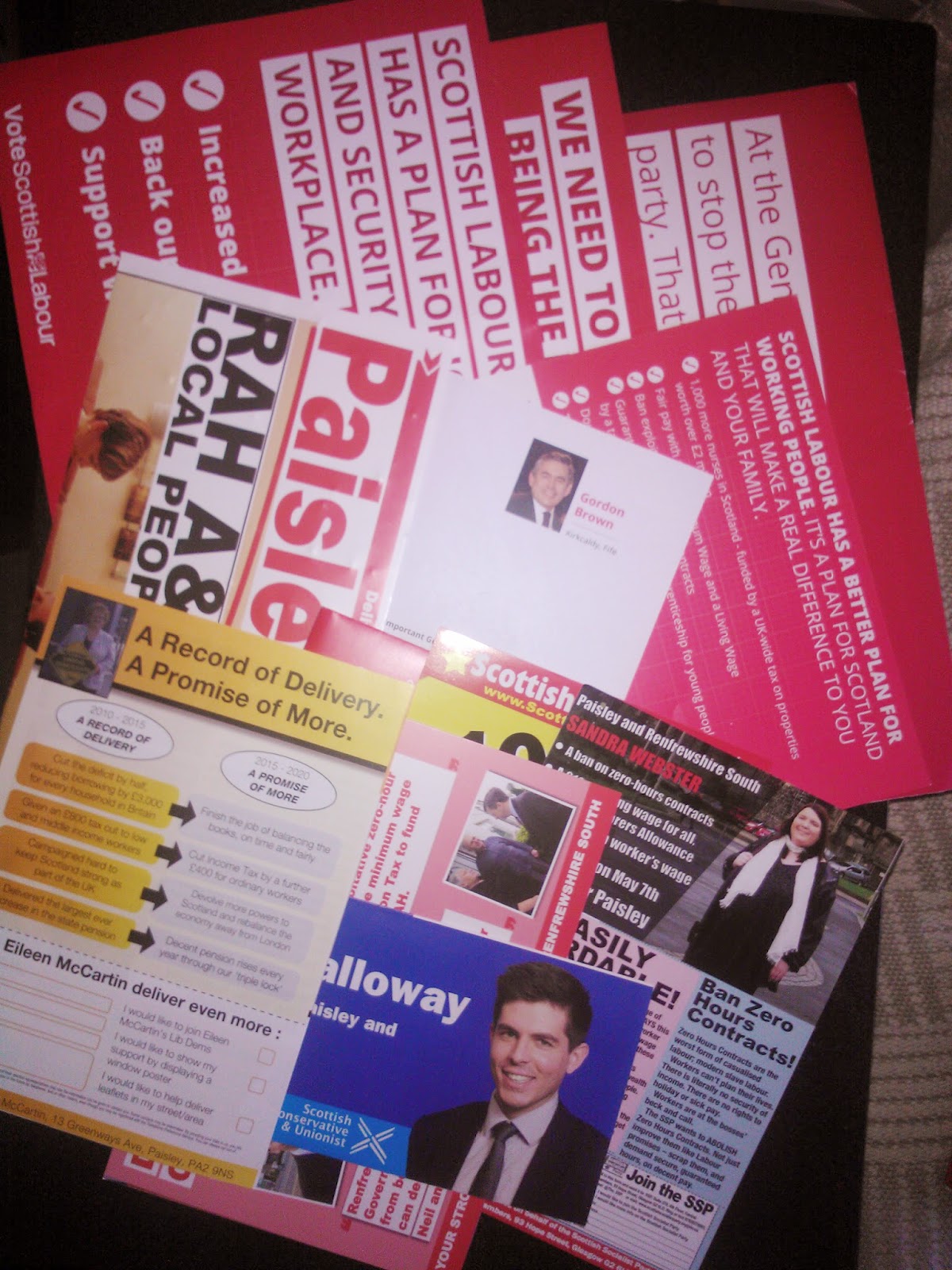 We are now nearing the end of the election campaign, with the battle for votes heating up.  Endlessly on the media, I hear talk about what is said on the doorsteps, which is strange as all I’ve ever had on my doorstep are political leaflets.  Not one canvasser whatsoever at all.

From the polls, the battle here for the Paisley & Renfrewshire South seat is going to be a close one and one the SNP would be very happy to take.  Yet I’ve not had one single leaflet from them (hence the nil in the title of this blog).  In sharp contrast I’ve been bombarded with leaflets and ‘personal letters’ from Labour.  So from that point of view, it was interesting to hear the thoughts of our SNP candidate Mhari Black on the BBC's Good Morning Scotland on Monday morning.  I had heard good things, yet the interview itself was somewhat underwhelming.  Her defence of the SNP’s fiscal policy wasn’t as polished as it could have been but she was caught off guard by a question about “gullible no voters”.

Inexperience perhaps but she really didn’t handle that question very well at all, and maybe that betrays something within the SNP’s thinking – that it’s not our fault we lost.  Sorry to be the bearer of bad news but it’s precisely your fault.  You didn’t win the economic argument and then there’s Sterlingzone.  Recognize your faults, learn from them and move on, like…  um…  no… It’ll come to me… there is an example of recognising how you failed in the Scottish political landscape, it’s just not coming to me.

Certainly not Labour who seem to be making the same mistake with every interview & leaflet.  Alexander used to be the future, on Monday he was utterly soulless and robotic.  The thing that Alexander & Murphy don’t quite get is that banning zero hours, putting the minimum wage up to £8.00 by 2020 and the other, heavily caveated stuff, just isn’t good enough.

This being the election campaign, there are other candidates and we can’t obsess about desperate Dougie (nine leaflets…  and 3 of those after my post on the first ‘personal’ letter) and Mhari Black.  Sadly there’s no Scottish Green leaflet because, sadly, there’s no Scottish Green candidate.  There are three leaflets from the SSP though.  Their biggest selling point is a policy to raise the minimum wage to £10.00 per hour while there are others there that are eye catching. The scrapping of the Council tax, replacing it with an income based Service Tax being the one gagging to be picked up by either of the big two.  The SSP have also mentioned the plugging of “tax loopholes and £120 bn a year tax dodging”.  Not exactly the so called ‘tax gap’ by name, and about £30bn out, but it is the direction that the SNP & Labour (as progressive parties) should be moving towards.

The two leaflets remaining came from the governing parties.  Very long term readers will know that I voted Lib Dem five years ago and will suspect it’s not an outcome I’m likely to recreate next Thursday.  True, I can’t complain about the raising of the tax threshold but I’m sure that the deficit has not been cut in half (when the plan was to have cut).  The buzzword for the Lib Dem’s leaflet appears to be ‘fairer’, yet this phrase seemed to be absent when they were making cuts to public services and removing consumer protection by scrapping Consumer Focus and by removing powers from the Food Standards Agency.

While the Lib Dem’s have spent the last 5 years as the Tories doormat, the Tories are not flagging up their ‘achievements’ but their aspirations.  This approach is markedly different from the Lib Dem’s leaflet which sets out their policy contributions to the coalition.  Interestingly as well, those policy aspirations are aspirations which most people would agree with.  “Reduce the deficit”, Cut Income Tax, Create More Jobs, all laudable aims.  It’s just that with the Conservatives the means to those aims are where the devil lives.  There’s a nice picture of Ruth there too.  Not on her tank mind but with the local candidate, who sounds like he should be a DJ on one of the hideously middle of the road local radio stations.

Apparently I’m not alone in not being 100% committed on who I’m voting for next week, there is supposedly 40% of the electorate who are undecided.  While the election coverage rolls along, my doorstep is still awaiting it’s first visit from a canvasser.
Posted by Allan at 13:00