Labour’s realisation that the seat of Paisley & Renfrewshire South is at risk of being lost has manifested itself on the negative campaign aimed at the SNP challenger and on the blizzard of leaflets dropped upon Glenburn’s households.  I’ve received four before receiving a ‘personalised’ letter from them, represented by local credit union boss Alison Dowling, on Saturday.  This is my response to that letter. 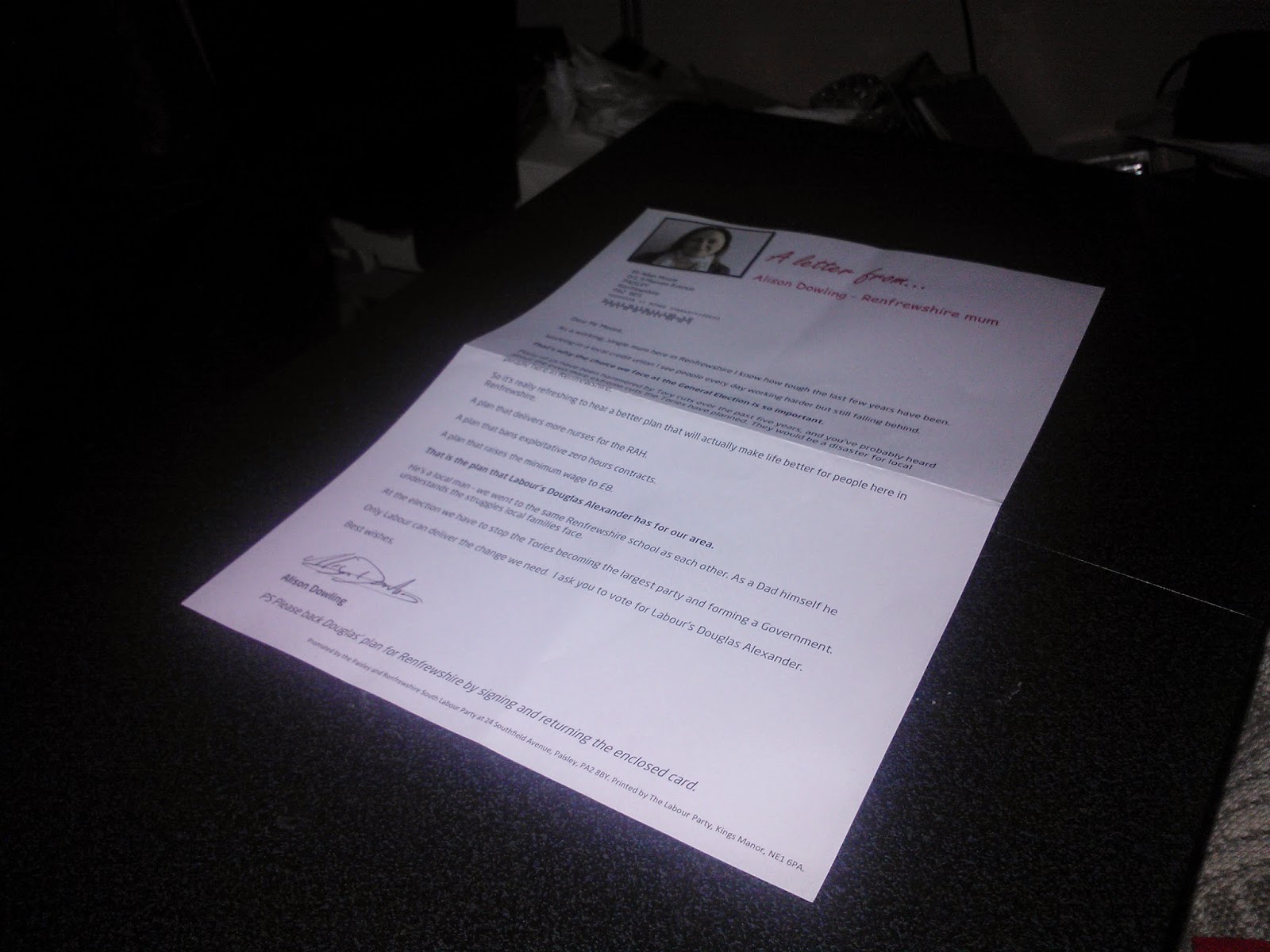 I’ve received your letter, which was promoted by the Paisley & Renfrewshire South Labour party.  I hope you do not mind my response in this forum.

I am rather perplexed with your letter overall.  You start by talking about the Tory cuts over the past five years, and the cuts that are to come.  What is perplexing is that your party (I am assuming that you are a member of the Labour Party) has essentially signed up to Osbornes policy of “Scorched Earth” economics.  Your shadow chancellor, Ed Balls, has confirmed that Osborne's austerity would be continuing.  The confirmation of this came in Balls speeches at the Labour conference in 2011.  And 2012.  And 2013. And at last years conference.  Indeed Balls is also quoted as saying that there is not much to Osborne’s budget delivered two weeks ago that he would reverse.  Although Balls hasn’t committed himself to £12bn cuts from the Benefits bill, the shadow DWP secretary, Rachel Reeves, has indicated that there will be cuts from this department.

My confusion is that there does not seem to be any discernable differences between yourselves and the Tories.  Both parties are reticent at putting forward their plans and in your parties case seems to fall apart under any sort of scrutiny, as we saw when Lucy Powell was questioned by Andrew Neil at the weekend.  So, what exactly is this better plan?

The second reason I’m perplexed is that you have mentioned a devolved issue in the shape of the NHS.  I’ve said before in this blog that the second SNP government has essentially run the country on auto pilot.  However any issues with the Scottish NHS are long term issues that have essentially been covered over with money thrown at the problem.  Too many managers and not enough front line staff being one of the problems.  Essentially issues both the SNP and your party have refused to grapple with.

I digress, the issue I have is that surely the state of the Scottish NHS is one for discussion at next years Holyrood Elections.  Unless of course the intention is to flag up the Barnett consequentials of any Mansion Tax (consequentials which would be less than the figures quoted by Jim Murphy).

Your plea that we have to stop the Tories becoming the largest party is complicated by the fact that your party has adopted and retained key Conservative economic policies since 1994.  It was the adoption of Laiziz Faire economics (through “Light Touch Regulation”) which set the conditions that enabled the banking crash of 2007/8 to occur.  It was also this adherence to Tory economic policy which saw the much fabled 50% tax rate not introduced until the last 18 months of the Brown government…  and starting £50,000 higher than it should have.  Labour as well have had their share of selling off the family silver on the cheep, the former Defence Evaluation and Research Agency was sold off in 2002 under the name of Quinetiq while the privatisation of the Royal Mail was Labour policy five years ago.

Like the referendum, I’m undecided this far out from the election.  What I’m almost certain about is that I won’t be voting for a Labour party still wedded to Blairite beliefs.