Why, Thank You Chuka Umuna 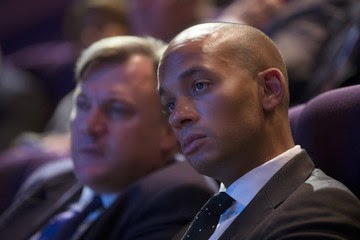 So when challenging Mr Kelly on “Scottish” Labour’s…  er…  what do you call those things that aren’t policies…  oh, that's right, positioning (and to be fair his love of faith schools which I may previously have expressed an opinion of, being a strident atheist), Kelly came away with the following pearls of wisdom.

“We want to put the minimum and living wages up as much as possible to carry through the campaign we started to bring the standard of living of the poorer sections of society up. The Labour Party have never been in favour of Tory austerity measures or Osborne's scorched earth policy, no matter how often you pedal that particular lie it is not true. There are problems in the NHS we have never said otherwise we would expect nothing else after 8 years of SNP government, 5 of those under the stewardship of the spectacularly incompetent Nicola Sturgeon. “split schooling”?.You mean Catholic schooling don’t you? In keeping with the SNP’s history of anti Irish racism and anti Catholic sectarian bigotry, you people are a blight on Scotland.”

Granted, outing myself as not being a fan of faith schools probably tipped Kelly over the edge, though I’d love to see Kelly accuse the British Humanist Association or the Scottish Humanist Society of bigotry.  It was also news, even to me, that I was a member of the SNP, but I suppose Kelly’s never seen my policy disagreements with the SNP – even the ones that made the Paisley Daily Express.  Kelly’s wee tantrum though unearthed an interesting nugget, that Kelly really doesn’t know where his party stands anymore.  Jim Murphy probably knows how he feels after Monday’s events.

If Milliband & Balls didn’t do enough to point out where they stood with trying to gain the badge of economic competence, then Chukka Umuna’s metaphorical sawing off of Jim Murphy’s legs  - “The leader of the Scottish Labour party will not be in charge of the UK budget. The leader of the country, the next Prime Minister, Ed Milliband, will be in charge of the UK budget.” - put us in no doubt where we stand with debt & deficit reduction.  Where the doubt comes in is the fate of “Scottish” Labour.

It is now looking more and more likely that “Scottish” Labour will be suffering a sort of mass extinction event in three weeks – one that surpasses the Conservatives losing half of their seats in 1987 (only to lose the other half 10 years later).  One must be wondering what the thought processes are in London about a part of their party that five years ago delivered their highest amount of votes in an election since 1997.  There must be serious ramifications in the pipeline for a part of a party whose conduct could be seen as a mirror image of Militant Liverpool.

I wonder as well if those ramifications could lead to “Scottish” Labour adopting (or being forced to adopt) the “Murdo Fraser” plan of splitting but remaining under the umbrella of the main Labour Party – an arms length separate party.  It would give “Scottish” Labour the freedom to set it’s own policies.  On the downside, I’m not entirely sure whether “Scottish” Labour are as full as talent as they were 30 odd years ago.  As I’ve pointed out previously when commenting on their respective chances of leadership – Marra and Dugdale might be the bright young things of “Scottish” Labour but they are only in their first term as sitting MSP’s.

That’s the long term ramifications, the short term ramifications involve “Scottish” Labour’s current leader, Jim Murphy.  One theory went that Murphy’s current position was only a stepping stone to becoming leader if Milliband lost the election – his candidacy for the East Renfrewshire seat maybe adds fuel to this rumour. Umuna’s kneecapping of Murphy could be seen as manoeuvring either as the man who did his own chances of being Millibands successor no harm or as someone who made it easier for someone else (Cooper?  Burnham? Reeves?) to succeed a defeated Milliband by putting Murphy out of the race.

Of course, those scenarios do assume that Milliband will emerge defeated from this election.  What is unfolding before our eyes is that Milliband is having a much better election than we thought.  He had the better of the Paxman interviews.   He bested Cameron & Clegg in the seven way debate and there is a sense, but no tangible polling evidence, that he has some momentum.  Having only seen the STV debate and the Sunday Politics stramash, Murphy looks like he only has one card to play even if it is a deeply flawed card.  Unquestionably Milliband is having a much better election than Murphy, underlined by Murphy going distinctively off message during that Sunday Politics debate.

The editor of Better Nation, James MacKenzie asked if the Labour Shadow cabinet hate Murphy so much that they’d hang him out to dry.  I’d suspect that the more Blairite members of Milliband’s cabinet maybe think Murphy has gone native up here and saw the ideal opportunity to dispose of a potential future leadership rival (He had claimed that the proceeds of the proposed Mansion Tax would be spent here - not just the Barnet consequentials).  Before the repercussions kick in, we have the election and if Scottish votes do deprive Milliband of an outright majority, the only people to blame are those within the Labour party and it’s still Scottish branch office.
Posted by Allan at 11:00