Yet Another ITV Gameshow...


So five years on from their experimental game show “Who Want’s To be Prime Minister”, ITV showed the follow up & expanded the format.  Tonight’s contestants were Dave from Whitney, Edward from Northampton, Nick from Sheffield, Nicola from Irvine, Leanne from the Rhondda and Natalie from Australia. 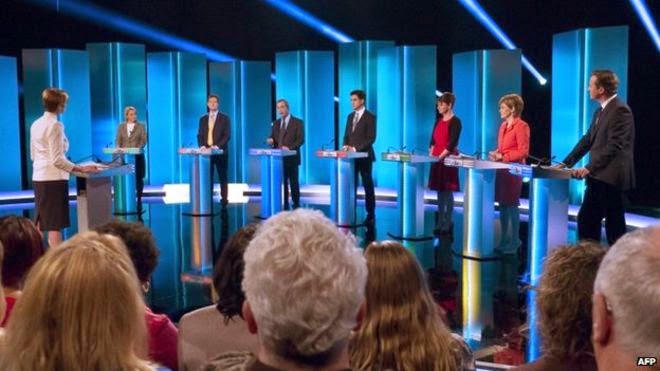 Yip it’s ITV, so it had that cheesy gameshow vibe from five years ago.  And it had Julie Etchingham rocking a homage to Anne Robinson style look.

The winner though was Nicola from Irvine.  Now, we’ve known Sturgeon for years, I remember her from being a regular on STV’s Trial By Night in the mid 90’s (with Bernard Ponsonby, the best interviewer the BBC never had) when she was the SNP candidate up against Mohammed Sarwar.  And after her demolition job on Michael Moore, his successor as Scottish Secretary Alistair Carmichael and the Deputy Leader of “Scottish Labour” Anas Sarwar, during last years referendum we knew exactly what she was capable of.  Except I’m not sure that she was as dominant as she was then.

With six other participants, there wasn’t the space for Sturgeon to dominate as she has done.  However there are two other points that came out of the debate that was apparent to me.  First was that I think Sturgeon has now supplanted Salmond in the minds of English viewers (and the Anglocentric Media) and announced herself to those people as the SNP leader.  And secondly, I think she is very obviously the Alpha leader among the “progressive” alliance group of parties.  Both Wood & Bennett were clearly a level below Stugreon (not surprising as Bennett has never been involved in a debate like this & I would suspect that Wood is nowhere near as experienced in these type of debates as Sturgeon either), but did contribute to the debate and made a very positive impact.  It was Plaid Cymru’s Wood that tackled Farage over his HIV comments.  Surprisingly (and possibly correctly), Bennett attacked Sturgeon for arguing for immigration in purely numbers and economic terms.  Having said that, neither Wood or Bennett had the utter shocker that Farage had.

He had had one of his crazy moments earlier in the debate when he started shouting over Wood, and had a moment where we shouted for everybody to calm down.  What has made his comments about migrants with HIV is his continued defence of them.  It might be a worthy idea economically, but shows a black… black hearted lack of humanity at the heart of UKIP.  I think it was Sturgeon that wondered if there was anything Farage wouldn’t blame of forigners, whoever it was they were spot on.

Of the three main party leaders, Cameron didn’t have the best debate but will be happy that it was nowhere near as bad as the Paxman interview last week.  He kind of looked like an actor playing an old Etonian Prime Minister, patriarchal bordering on the patronising  - some of his looks towards Sturgeon were akin to him saying ‘go away and play with your toys, this is big boys stuff’.  Essentially he survived the debate.

Clegg didn’t repise his role from five years ago, essentially because Sturgeon had already bagsied that role.  His position in government came constantly under fire from the ‘Progressives’, he did manage to land a blow on Cameron at the start over blocking one of the Tories plans & did land a serious blow on Miliband on their failure to accept responsibility for the recession.

Milliband had the best debate of the three main leaders, however he did not land a killer blow on Cameron.  His arguments were fluid, clear and concise.  He came across well…  but could not land a blow on Cameron.  There were times where I thought that Milliband should have looked at how Harold Wilson make jokes and seeded the image of another old Etonian Prime Minister, Alec Douglas Hume, and adopted those tactics against Cameron.  Yet, while Milliband had a good debate, he wasn’t as good as Sturgeon.  As a result, his Scottish…  er… branch office will have done badly.  It could be that Milliband wasn’t briefed on how to tackle Sturgeon.  An alternative view would be that Milliband doesn’t rate his Scottish colleagues and is embarrassed either by their rightwing positions on certain policies or their conduct.  If he was, he’d be right.

Returning to Sturgeon, what marked her out from Salmond was that her performance was grounded – there was no showboating.  Oh and I wonder if Salmond, the old oil economist and pal of the bankers, would have been as enthusiastic a Keynsian as Sturgeon was.  Six months as SNP Leader and First Minister of Scotland, I think we can now say that Sturgeon has arrived.
Posted by Allan at 17:00