So...  where were we before we were so rudely interrupted by the Muslim equivalent of those Christian fundamentalists who kill doctors and bomb abortion clinics in the US.

Before the Tories are allowed to get away with hitting the reset button on a campaign that was close to collapse, we should remember the scale of what happened on Monday.  No sitting government has ever u-turned or performed anything remotely close to a u-turn during a re-election campaign. Ever. 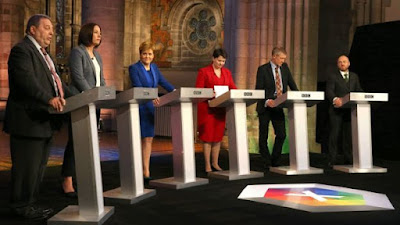 Yes, we need to think about care for the elderly and how it is funded (and Ian Smart writes a rather thought provoking and interesting piece on this).  However the Tories have rushed to conclusions and not thought out how to proceed.  It is not the first time this decade a sensible issue has been handled carelessly by the Conservatives with electoral consequences.  Think back to the EU referendum and before that the Sermon on the Pound.

However, at the end of last weekend there was a debate on BBC Scotland which partly over shadowed the Tories polling collapse.  There were two noteworthy issues to come out of that debate.  The first issue surrounded that Nurse.

Without really doing very much, the nurse that has to go to foodbanks and brought up nurses pay unwittingly uncovered the inverse snobbery that we Scot’s excel at.  After her appearance, she was subjected to the fullest assault from pro-SNP supporters on the Twittersphere, with some people claiming that she was a) married to a Tory councillor and therefore b) a Tory plant.  Both of which are falsehoods, lies which the SNP candidate Joanna Cherry did apologise for.  However, once again parts of the “Yes community” couldn’t help themselves and behaved like an unofficial secret police in dredging up parts of this woman’s life into the public domain.

Had those parts of the “Yes community” shown a modicum of restraint, we would have remembered that the First Minister actually handled the nurses questions and statements rather well and with understanding.  With Sturgeon expressing regret that she has been unable to raise nurses pay more than she has been able to, whilst pointing out her pay is higher that it is in England.  It is worth bearing in mind though that nurses pay is between £22-26,000.  The average wage in Scotland is around £28,000.  Something to bear in mind when we talk about the cost of independence and Scotland being too poor to be Independent without pointing out why living standards are so low here.  Instead, the story became about the so called ‘Cybernats’ and their alpha-chimp.

The most striking thing about that debate is that the election here in Scotland is now between the Tories and the SNP.  It was simply astonishing to see how diminished Scottish Labour have become, more so under Dugdale.  Her answers were not convincing, and Dugdale and Scottish Labour’s decision to sideline Corbyn’s manifesto (which is infinitely the most attractive Labour Manifesto in my voting lifetime) in favour of a ‘Stop Indyref 2’ campaign has and will backfire on them come election time.

It should come as no surprise whatsoever that Scottish Labour is now a very different animal from it’s English counterpart.  Whereas i think that Corbyn’s opposition to Scottish Independence is down to his (misplaced) view that the SNP are nationalists and not proponents of Scottish self determination and a view that Independence is electoral poison in England.  Scottish Labour’s opposition is dogmatic & kneejerk with very little actual arguments against, which as we’ve discussed ad nauseam has led to them being ridiculed under the #SNPBad hashtag.

Had Scottish Labour thought properly about this, they would have come up with more nuanced arguments against Independence and realised that talking about Independence all the time obscures their policies and values.  They would also be in a much better position to provide constructive opposition if they weren’t seen as the anti-SNP party.  That’s not to say I think they’re wrong in opposing Scottish Independence – there is a constituency of Scottish voters who are anti-Independence but are not Conservative in their thinking yet would only be given the option of voting Tory – but their opposition is poorly though out, incoherent and not solid enough.  A symbol of Scottish Labour’s approach to Independence is their relationship with Better Together.  They were happy to share stages with the Lib Dems and the Tories, they were happy to take the Tories money and happy to mouth Tory scripted attack lines yet could not understand how and why this offended Scottish voters.

This issue of course leads to the tenability of Kezia Dugdale as Scottish Labour leader.  This is her second big election campaign and there are no signs whatsoever of lessons being learned. The problem, should Dugdale stand down, is the one of there not being an obvious replacement and one who can rebuild Labour into a party that can put someone into Bute House.  If there is no Labour advance in two weeks, then i’d think there will be trouble ahead for Ms Dugdale.

With campaigning getting back underway, it will be interesting to see the effect of Nursegate and the increasing irrelevance of Scottish Labour on this election.  At a wider level, an election that was billed as May’s coronation looked on Monday night to have turned sour.  If the Tories have successfully hit the reset button, it could still be a big win but there is now uncertainty, for the first time, about the result.
Posted by Allan at 13:00