There is a sort of hush that descends upon the country as an election campaign ends and the period of political silence draws near.  It provides a brief opportunity to take stock on things before votes are cast and results are known.  20 years ago, on the eve of polling Newsnight asked the ‘Inverdale’ question of that years General Election – in the pantheon of General Elections would 1997 be seen to be as much of a game changer as 1945, 1964 and 1979 had been? 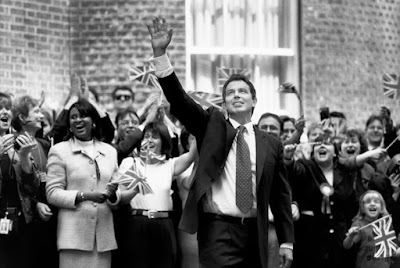 At that point, I’d actually thought of Labour as being slightly continuity Major and certainly hadn’t thought of New Labour as promising a break from the past that Attlee or Thatcher had.  With twenty years of hindsight though, I can see that in it’s own way Blair and New Labour were a radical break in defining post-Thatcherite social democracy.  In terms of left and right politics, what they did was firmly define, and pioneer, the ideas, values and policy positions of Centralist governments.  It was, out with US politics, the third way made flesh for parliamentary democracy.

Like Thatcherism, New Labour did not enter government as a fully formed entity.  Both were still works in progress and both formulated the outlines of their radical policies during their first terms.  Blair and New Labour’s policymaking however was borne of frustration at the parlous state of the UK’s public services.  If you remember, the first New Labour manifesto was built on the 5 point pledge card.  These pledges such as cutting class sizes, cutting NHS waiting times and getting 250,000 people off benefits and into work were conservative in terms of ambition and desire to change things.  Yet the simplicity, the sense of a first step being taken won the country over.

Of course, with hindsight the sunny optimism of those sunny spring days 20 years ago did not last.  Blair’s domestic policy came up against vested interests, those outlined in his kite flying “The Forces of Conservatism” conference speech in 1999.  The thing which did the most damage to Blair & New Labour’s reputation though was the decision to invade Iraq.  There has been acre’s of print committed to Iraq and Blair’s decision to oust Saddam Hussein by force, and I won’t add to it here.  Suffice to say that even if I profoundly disagree with the decision and believe it to be the worst foreign policy in living memory, I have a creeping admiration for Blair’s consistent sticking to his guns.

Yet for all the toxicity of Blair & New Labour and the crumbling of their legacy under the weight of a relentless Tory government, Blair’s third way politics have proved to be a template for how to target centre ground voters. Both of Labour’s key opponents in Westminster have appropriated Blairite styling’s and policymaking in the shape of Cameron’s own modernisation project with the Conservatives and the ideas espoused in the Liberal Democrats “Orange Book”.  With great irony, the people who took on the Third Way flame was not one of New Labour’s architects but one of the contributors to the Orange Book – Nick Clegg – and David Cameron.

The biggest proponents of Blairite centre-ground politics today do not reside in the House of Commons.  We shall see what happens next week in France, but from the outside Macron looks like the French Blair in terms of his resolutely centre ground dogma and his EU-enthusiasm.  In the UK though, the party who have looked at New Labour and assiduously used it as a bible have been the current incarnation of the Scottish National Party.

As I’d pinpointed previously, the SNP through necessity have always been a big tent party but under Salmond they had adopted left wing policies melded to right wing economics & taxation policies.  Like New Labour, the first term was a pragmatic term, the second term brought revolution.  Whether the SNP learn the lessons of New Labour…  we will see.

Personally, 1997 was the first General Election I was old enough to vote in, I voted Lib Dem and the Labour sitting MP (in this case, one Gordon McMaster, weeks before he passed away) increased his majority. I remember there being a degree of nervousness about the election, after all we all thought Labour was on it’s way to power five years previously.  Reading Blair’s memoirs, we weren’t the only ones resolutely in non counting chickens mode.  It was also an election brutal in the way that the old government were turfed out of office as dramatic defeat followed dramatic defeat of the ‘hated’ Tory government.  Whilst most people remember the fall of Michael Portillo – and let’s not forget how gracious he was in defeat – the likes of Norman Lamont, David Mellor and Gerry Malone fell more into the Tory stereotype of bad losers.

Despite my reservations at the time, 1997’s place as a watershed election is assured.  It was an election which saw the burgeoning centre of UK politics take control for the first time with a recast party intent on defining those ideas and ideals in ways which had never been done before.  Rather like Thatcher’s Tory party though, the seeds of New Labour’s downfall were built into the architecture.  In not pivoting left, New Labour alienated a large amount of core Labour supporters to the extent that 34% of Labour supporters voted for Scottish Independence and a similar percentage voted to leave the EU.
Posted by Allan at 23:00