A Lesson In Talking Left And Acting Right


With us now into the final full week of this election campaign, it is strange that the SNP had not been able to unveil their election manifesto until now.  It is arguable whether this has been a hindrance or not as the election leaflet received so far by them is not a list of priorities but a list of “greatest hits”.  Akin somewhat to a band who put out one good album before their label released them from their contract and subsequently putting out said singles collection package. 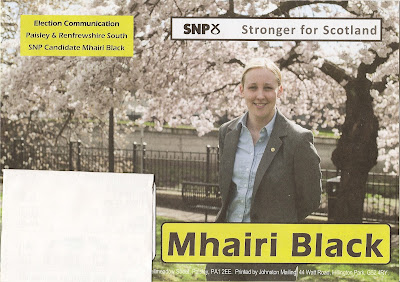 That the SNP member seeking re-election in this case is one Ms Black kind of typifies the SNP’s approach to this election – face leftwards at Westminster whilst ignoring the (pragmatism driven) New Labour agenda being pursued by their Holyrood colleagues.  Hence at Tuesday’s manifesto launch we have seen the SNP pledge to protect all manner of benefits and to propose various tax policies – policies which the SNP government seem to be unwilling to pursue.

We can understand the rationale for wishing to protect benefits, after all not every inch of the DWP has been cloned and transplanted northwards. DLA and it successor PIP will still be Westminster (mis)run.  However there is some issue surrounding what the SNP can and can’t do regarding the powers that have been transplanted northwards with the Tories and Scottish Labour claiming Tax Credits (including Child Tax credits – centre of the controversy surrounding the so called “Rape Clause”) is under Holyrood jurisdiction (the government website states that Holyrood can “top up” Universal & Tax Credits but presumably not amend or scrap those UK wide benefits).  Surprisingly the SNP aren’t playing the “we were blocked from devolving all Benefits powers” card yet, though if this row develops, it’ll be a matter of time.

On the leaflet, Ms Black highlights her work fighting against the various benefits cuts and the WASPI campaign (fighting for equal pension rights).  Whilst this is very admirable and a plus point (and I’m sorry if that sounds patronising, it’s not meant to be), I wonder if this experience could (and perhaps should) be of further use to the SNP.  Last year’s Holyrood prospectus was a bland, conservative affair given the imminent powers transfer.  It should not be beyond the wit and wisdom of the SNP to use Black’s findings and Freedman’s experience to fashion a benefits system robust enough to take Scotland into the first years of Independence.  Maybe I digress, but it is a moot point worthy of consideration ahead of the next Holyrood elections.

Similarly, the SNP have said that they would like a 50% tax rate across all of the UK, but have currently no plans to bring this in here in Scotland.  The reasons given seem wooly – related to being a green light for people to leave Scotland and head south.  Coupled with their plan for the 50% rate to kick in at £150,000 (rather than Labour’s policy of it kicking in at about £130,000 – still above where i think it should be) leaves me to thing that the SNP are still wedded to Laffer thinking, that low taxation rates bring prosperity.

There is two points that came to mind with the SNP launch however.  The first is that the ambition shown and policy depth and reach espoused by Sturgeon... am I alone in thinking that we should have heard similar noises last year?  I don’t remember very much last year about what the SNP wanted to do with a third term – second referendum apart.  There were baby boxes – a fine idea so simple that you wonder why no one else thought about it.  But that’s it.  And that’s maybe my complaint as a whole about the SNP.

There are many small things that the SNP propose and have done, but there is not one ‘legacy’ policy among them.  Think Free Care for the Elderly (McLeish), scrapping Clause 28 (Dewar) and the smoking ban in pubs (McConnell).  I’ve said before that reform of the NHS and other public services (democratisation of the health boards and a standards body for local authorities being two ideas I think are worth pursuing) should be on the table and that the SNP, more than Scottish Labour, were in a position to pursue those policies. It’s very strange to see the SNP willing to think outside the box for Westminster elections but be resolutely conservative in their approach to Holyrood.

The other point is that those referendums are never far from the surface, and it was again with Sturgeon pursuing the line about Tory Brexit and being dragged out of the EU against ‘our’ wishes.  That the person who said that “there is no such thing as soft Brexit, just hard Brexit or no Brexit” was the president of the European Council, Donald Tusk, seems to have bypassed the SNP.  The desire to hand the UK a punishment beating from Tusk, Junker and Verhoffstadt (though interestingly, the European Parliament is thought to want to reign in Verhoffstadt) has also bypassed the SNP.  It once again reinforces the SNP’s worldview that Westminster Thatcherism is bad, but EU sourced Thatcherism is good (even if Verhoffstadt is from the Belgian left), which is a simplistic and incorrect way of seeing things.

Interestingly, and wisely, Sturgeon does appear to be making babysteps away from a referendum in the Autumn of 2018 by saying one could be held after the negotiations have been completed.  I’ve already said a second referendum is unwinnable this side of divorce proceedings from the EU and my view is unaltered, I wonder if that is permeating SNP thinking hence the small, strategic, retreat (though not enough to scare the fundamentalists). If this were the case, it does not seem to be in tandem with any learning of lessons from 2014.  Certainly I do not think an Independence referendum can be won without a promise of a debate on whether we should join the EU (bearing in mind that last years referendum was dominated by a UKIP agenda, so a proper debate on the merits and democratic pitfalls of joining should be given exposure, alongside acknowledgment that free movement is a good thing which doesn’t work here because of social mobility issues) in the future. 38% of the SNP’s 2015 voters voted for Brexit, put off by the calamities of the CAP and the common fisheries policies, so any Independence campaign needs to bring those people back onside first.

Whilst the SNP can claim that Labour have borrowed (back) some of their policies under Corbyn, the SNP seem less keen on it being pointed out the debt they owe to the New Labour playbook.  Yip it is true (thanks to Labour’s... er... identity issues) that the SNP have been the only opposition at Westminster, but looking at Black’s leaflet a lot of the work undertaken by the SNP have been below the radar, on select committees and private member bills. If the narrative of this election so far has been the choice being between flawed candidates and flawed policy positions, the SNP’s prospectus may be less flawed than the others but still has serious issues – depending on which side you stood on in any of those two referendums.

For all that the SNP talk of being progressive, they’ve continued the mistake of airbrushing the (just under)2 fifths of Scottish voters who voted for Brexit out of the equation.  It’s a mistake that looks more and more costly the closer we get to election day.  It is a mistake that could eventually put a second independence referendum off the table.
Posted by Allan at 10:00