With the news that the Tories are still averaging in the high 40’s and Labour’s percentages are creeping up, the conclusion that you could make about ITV’s third outing of “I Want To Be Prime Minister” is that with the exception of the Scottish First Minister, none of the participants were in with a chance of making a dent in the already nascent election campaign, never mind in with a shout of the big prize. 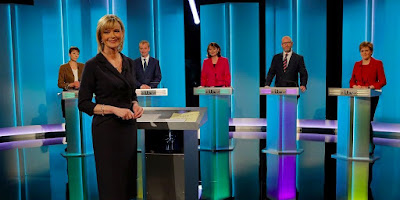 Nicola from Ayrshire aka the SNP’s leader and First Minister of Scotland is already a dab hand at these affairs. I do wonder though whether the ease which she sailed through this was down to her skill at these affairs or whether no one actually had the knowledge or the nouse to tackle her on her record as Scottish First Minister.  As a result she sailed through the section on Education without one single mention either of the literacy figures or the pigs ear that is the replacement to Standard Grades & Highers.  Nobody brought up her policy of a 50% tax rate for the UK but not setting the higher rate at that level here in Scotland.  Her reasoning for that sounding suspiciously like George Osborne’s reasoning for cutting the top rate from 50% to 45%.  I don’t even think the UKIP guy laid a glove on her regarding her record on bringing the country together in the aftermath of the EU Referendum.

Then again, Scottish affairs have never really featured very high on the UK news cycles.  Which is why a high profile figure like Sturgeon can get away with being the darling of the progressive classes while pursuing a New Labour agenda in Scotland?  And why when Caroline Lucas talked about Free Care for the Elderly, Dim Faron didn’t claim the policy as his parties policy (pushed through by Jim Wallace when he was Deputy First Minster in the Labour/Lib Dem coalition). But certainly being a part of the non-Labour aligned progressive alliance (as opposed to the soon to be a thing Progressive Alliance party) paid off for Sturgeon as no one really laid a glove on her.

Unfortunately the story is more about who ducked out rather than the participants who did take part.  For all that Lucas was perfectly sane and sensible, that Sturgeon sailed through and that Nuttall was cast as the pantomime villain, the two main protagonists in this election were missing.  We all know the reasons, that May is believed to be a stiff and somewhat poor debater and that Corbyn...  well actually I’m not sure why he declined to appear.  I’m surely not alone in thinking that however bad a leader he is, he can’t surely be that bad against Wood, Lucas, Farron & Nuttall.  That and actually this could have been an opportunity to put your ideas across.  Polling suggests that there has been an increase in Labour’s vote, this could have been an opportunity to consolidate that increase.

While Julie Etchingham chided May & Corbyn for refusing their invite for this debate, I think that they should have empty chaired them, empty lecterns and all.  It would have been a visible symbol of parties that wanted to disrespect the UK voter.  Instead, I think Corbyn and more so May have rather gotten away with it.  Had both been there, we would have (for better or worse) seen the true mettle of the prospective prime ministers.  A by-product would be that we would have seen Sturgeon up against people who in the past (given the way she bulldozed through Michael Moore & Allistair Carmichael during the independence referendum) would have been a winnable test.  A much more difficult task than what was presented tonight.

Given ITV’s previous debates resembled game shows (and how nice of them to re-cycle the set from two years ago) then this edition is difficult to pin down.  The winner will not be the one striding up Downing Street in three weeks claiming victory.  Indeed, you could argue with the Lib Dems not cutting through, the SNP looking at defending seats rather than rolling through them, UKIP falling into history and Plaid and the Greens looking to hold on to what they have, the parties represented could end up as losers to varying degrees come June 9th. That rather suits Theresa May’s Tories just fine.
Posted by Allan at 10:00