With the enforced mid campaign break, all the hustings events are now begining to pile up.  Earlier saw the last big set piece debate (though I think there might be one "Scottish" debate, as well as the Question Time set pieces) and the themes of this election were all discussed.  Including the theme of the inability of our Prime Minister to debate with the canditates for her job. 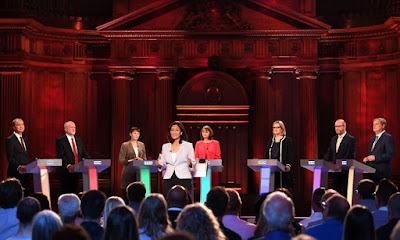 Both Lucas & Faron brought this up, though Lucas was the best performer in this debate.  Lucas brought up the UK's policy of selling arms to the country which brought the world Wahhabism, Saudi Arabia and also was scathing in her comments about Brexit & UKIP's little Englander mindset.  Paul Nuttall looked uncomfortable at times and cut a frustrated figure as Lucas, Corbyn, Robertson & Faron took it in turns to attack his racist outlook.  The comment that really cut him to the quick though was Wood's quip "In the real world, there's no such thing as a free divorce, you have to pay your dues... we know all about blokes like you".

If Nuttall was the loser of the parpicipants in the debate, the big loser was the Prime Minister.  She was attacked and ridiculed at every opportunity for not taking part, while afterwards during an interview on BBC News channel, Emily Thornbury (correctly) called May a coward.  In her place, the Tories put forward the Home Secretary Amber Rudd, who actually performed okay.  Certainly she performed much better than May did during the Andrew Neil interview and the Paxman... thing.  Lets not forget though that she was a strong performer during last years EU referendum debate, uttering the line about Boris (Johnson) and car keys, a performance that possibly got her the promotion to Home Secretary.  If May remains in Downing Street after next Friday (and polls suggest it's entirely down to turnout), then we shouldn't be surprised if May is replaced within months.  And the name of Amber Rudd might well be on a list of possible successors.

On the other hand, Corbyn did well.  He has certainly performed better than expected during this election, putting Rudd under pressure on living standards & benefits.  There were moments, during the discussion regarding immigration though, where he looked uncomfortable under attack from the SNP's Angus Robertson, but he did very well.

You did read that right, Angus Robertson.  I'm always bemused that Robertson doesn't get more of a run out, given the good press he gets.  It's not as if he's the SNP's Westminster leader or anything like that.  He did have some good attack lines - on immigration and by bringing up terrorist attacks not perpetrated by Wahhabists.  The thing about Robertson though is that there's a touch of the Paddy Ashdown's about him.  His arguments delivered with the air of pious indignation.  Corbyn asked Robertson two questions - about if he remembers us having a vote on the EU and why doesn't his party end austerity through the powers of the Scottish Parliament - and Robertson plainly blanked them both, embarking on another speech instead.

Unlike two years ago when Cameron emerged unscathed from the 7 party debate, you couldn't say the same about Rudd.  That debate took place right at the start of proceedings though and marked the high point of Ed Milliband's campaign.  This time, this debate can be seen as a firm continuation of the election narative.  Labour performing better than expected, the Tories underperforming, UKIP collapsing and the SNP being beligerant in the face of a loss in support.  If the Tories do not win with a majority bigger than the current 12, then this election will be seen as a political miscalculation which firmly knocks the First Minister's own referendum miscalculation into a cocked hat.
Posted by Allan at 00:01