The Red Shoots Of Recovery

For a change of tack, I thought it would be good to hear about the recent General Election from an insiders point of view.  So first up, we have a guest post from Lauren Gilmour from Scottish Labour.

Lauren is a Labour Party member and activist, and exiled Buddie living in Glasgow, who has a degree in Politics from UWS.  Lauren's post is about how Labour can kickstart it's recovery in Scotland. 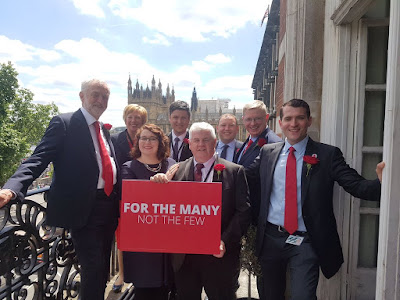 What a difference two years make…

We didn’t see that one coming. Even as the exit polls, proven to be very wrong at the last election, came in predicting a hung parliament, we didn’t see it coming.

We’ll be taking a look more closely at the campaign Labour ran in the general election both across the country, in Scotland and in the West of Scotland.

It wasn’t always going to be this way. Labour went into this campaign with dismal poll ratings of 25%. They were predicted to fall under 200 seats in an election loss similar to 1931. But Corbyn had a trick up his sleeve – to run the general campaign in the same, positive, upbeat way he ran his two previous leadership election campaigns, which both delivered stonking victories.

Gradually this worked. We saw Corbyn in his element – proposing not opposing. Ironically, Corbyn’s campaign events attracted more and more media attention as they grew due to a focus on the broadcast media, rather than the print media. Journalists who would push a pro-Labour line were also identified in a strategy similar to Tony Blair’s 1997 strategy.


In contrast, Theresa May’s campaign was limited to the reluctant party faithful and very sympathetic journalists who did little to challenge her. Labour election rallies were open to whoever wanted to go. Corbyn grew more and more comfortable, speaking and rallying the crowds. He moved from speaking behind a podium to being able to make off the cuff speeches with just a small black notebook to prompt him. The internet meme machine was also in full force during the election, while they weren’t alone in delivering a good result, they certainly helped to mobilise the youth vote – thought to be around 70%. The youth vote was also responsible for winning in places like Canterbury who have had a Tory MP since 1918. There were some truly historic victories during the evening of the 8th of June.

In Scotland, there was a noticeable shift in attitude towards the Labour Party. Lets face it, things couldn’t have gotten any worse after the 2015 election humiliation and finishing third behind the Tories in last year’s Scottish parliament elections. Scottish Labour was buoyed by a Corbyn boost, he appeared three times in Scotland during the six week campaign culminating in an early morning, pre-work rally the day before the general election. In 2015, Labour activists were subjected to things like being chased with chainsaws and having election events picketed by extreme nationalist fringe groups. Towns and cities were plastered with stickers saying “red tories out” and doors were slammed in faces.

Now on the doors, people were willing to listen to what we had to say and even switch from the SNP back to Labour because the SNP had been largely absent. The Labour campaign was more visible in a lot of areas and as a result, the SNP vote fractured. SNP voters either did not turn out, voted Labour or Tory.

The biggest surprise of the night was Labour winning six seats back from the SNP in addition to their now safe seat of Edinburgh South. The mood within the party was that we would be having a good night if we managed to retain Edinburgh South and win an additional seat. Some unfortunately missed out like Angela Feeney in Motherwell and Wishaw and Matt Kerr in Glasgow South West who lost by just 60 votes.

Whilst Labour exceeded expectations, there is now a feeling that we could have done better. Scottish Labour’s vote share went down in areas which until 2015, were Labour heartlands including Renfrewshire and Ayrshire. In Paisley and Renfrewshire North the Conservative vote went up by 15.3% and in it’s southern neighbour, the share of the vote went up by 11.8%. Labour in North Ayrshire were knocked into third place by the Tories.

This is in contrast to other deindustrialised areas in Scotland such as Midlothian, East Lothian and Fife who all returned Labour MPs. The experience being on the doors in these areas matched the results at the ballot box. In Midlothian the response was very positive for Labour, but in Ayrshire, not so much.

In east coast former mining areas and in Lanarkshire there is more of an industrial legacy that binds working class people together in a way that it no longer does in the West of Scotland. Particularly in Paisley and Renfrewshire – many of those who worked in the mills here have now passed on and the experiences of mill workers in Paisley exists only in the heads of those with parents or grandparents who worked there. For many in the Lothians and in Lanarkshire it is still a first hand memory.

We also have to recognise that there is more of a tradition of protestant loyalist unionism in the West of Scotland. Where these people used to vote Labour in the knowledge that the union would be safe, they now feel that the Conservative Party are best placed to preserve the union, ironically.

Seats like Inverclyde came within a whisker of going Labour once again and Paisley could once again be winnable. When we look at the campaigns run by Labour candidates in Paisley and Renfrewshire, Inverclyde and East Renfrewshire, they have a very overtly pro-union message primarily. Jobs and the economy come secondary to the union.


What lessons should Scottish Labour learn from this?

We don't have to spend lots of money to deliver victories – resources and money were pumped into East Renfrewshire to buoy Blair McDougall. Sadly, this did nothing to boost Mr McDougall's chances. Conversely, in Glasgow North East, Paul Sweeney's campaign was delivered on a shoestring budget and he won.

Indyref 2 is well and truly off the agenda now. It would serve Scottish Labour well to put it on a back burner, too. It's time for Scottish Labour to be more ambitious and aim for the SNP vote. Supporting the union is not and never was the raison dêtre of the Labour Party.