If May’s Conservative party are the big losers from the General Election, then what are we to make then of the party who lost more seats, net, than the Tories and unlike the Tories lost votes and dropped points in the share of the vote.  They may have won their second General Election here in Scotland, and continued the winning run that goes back to the 2010 General Election, but the SNP have the look of a party in trouble and in several minds as to its direction of travel. 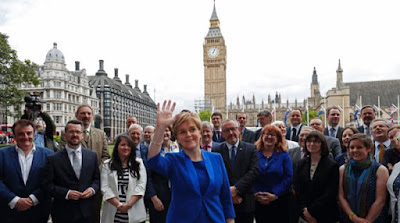 The media narrative blames the SNP’s ‘obsession’ with a second Independence referendum as being something that has turned voters away from the SNP.  I’ve said before that I don’t think that this policy in itself is a vote loser, that it is more the SNP’s interpretation of their “material change” and that the public’s interpretation of that policy is different, the public clearly do not see Scotland as being “ripped from the EU against our will” as the SNP clearly do.  However it is the SNP’s clear tying of the Independence issue to membership of the EU which has caused the ‘Indyref 2’ policy damage. What the SNP’s so called obsession with ‘Indyref 2’ has done is galvanise another group of voters that the SNP have alienated & disrespected, that group of voters who voted to keep Scotland within the UK, voters who are not SNP voters or bother with the fripparies of '55' twibbons or such like.

The hierarchy of the SNP seem to have not noticed that 36% of SNP voters voted to leave the EU last June as since Referendum Day, the SNP have pursued a dogmatic, narrow view of the result.  Dogmatic in the sense that they have dismissed the 1 million leave voters as xenophobes whilst presenting the 62% of Scottish remain voters as true progressives.  If we became wary rather quickly with “Strong and stable” then “Tory hard Brexit” seems to have stood a better test of time, unjustifiably so as it isn’t just the Tories who would like a “hard” Brexit. To quote Donald Tusk “there is no ‘soft Brexit’, there is only ‘hard’ Brexit or no Brexit”.

The problem then is what the SNP should do about their, apparently, troublesome policy.  The SNP, and in particular the First Minister, have in rushing to put Indyref 2 on the table in the aftermath of the EU referendum badly misjudged the mood of the Scottish people.  Even now, after the election, there are SNP figures saying that they should ‘park’ the issue until the Brexit negotiations have been completed, which is...  err...  the same timetable the Scottish voters have apparently taken a dislike of.  There is some polling evidence to suggest that Scottish voters would like to revisit the Independence question, but after divorce proceedings have taken place.

As I’ve pointed out, the issue isn’t about the ‘material change’ but whether a referendum is winnable in the current climate or a climate 18 months down the line.  My conclusion is that any referendum tied to EU membership, which would not be attractive to the pro-Independent supporters who do not favour EU membership, would, allied to the SNP’s reluctance to look at how they lost in 2014, be simply not winnable given the split in the pro-Independence vote. Another factor to take into account here is that polls show that Independence is still around the 45% mark of the referendum with only some polls showing an increase.  In other terms Independence has still not overhauled the Union in spite of this apparent ‘sleight’ against Scots. And for as long as the SNP refuse to come to terms with their loss in 2014 and respect that result, they will continue to do so.

The lesson that should be learned here from the SNP’s loss of support is that the next Independence campaign needs to me much more of a big tent affair than in 2014.  The SNP’s narrow view of how an Independent Scotland would work was a flawed vision, with both their vision of EU membership and Sterlingzone being serious issues. And it is the SNP’s view that Scotland should be a full member in the EU that has caused them to become unstuck again.  The next time, they should not be so much in the cockpit of the campaign, they should perhaps promote other voices (the Common Weal & Radical Independence movements did not get the exposure or influence that they should have).  It would also be helpful if there were some right wing advocates of Independence.  It can’t just be Michael Fry from the Right who supports Independence.

The current vogue among SNP ‘grandees’ is to park the ‘Indyref 2’ issue in some way and promise to return to it in the next Holyrood parliament.  It is an attractive proposition but one with serious problems.  It risks annoying and antagonising the new found ‘Fundies’ that now make up the majority of the party.  People who joined in the wake of the first referendum and are now ‘mobilising’ for another crack at independence that have been marched to the top of the hill with their “putting the band back together” memes.  While they might be placated by a postponement, I suspect that both Davidson & Rennie would much prefer that the whole referendum thing would be kicked into the long grass in a more permanent way.

Any parking would need to be done to not look like a reverse ferret, a difficult task when Sturgeon has gone so hard on the issue.  Even more so when both the leaders of the Conservatives and Lib Dems respective Scottish branch offices have put opposition to a second Independence referendum (regardless of popularity) front and centre of their last two manifestos.  Any retreat beyond the outlined timetable risks handing those two parties a PR boost, victory on a plate and conceivably enough political momentum to propel Ruth Davidson into Bute House come the next Holyrood elections.

The ideal route forward would be to keep reviewing the situation throughout the Brexit negotiations but indicate willingness to not pursue a second referendum if their wishes are given a fair hearing.  The SNP however have other pressing concerns, as I hinted at in the previous paragraph it’s now possible that the SNP’s stock has fallen to such an extent that they may be displaced from government and that the next occupant of Bute House may well be Ms Davidson.  Compared to Dugdale, Davidson is a shrewd operator who has manoeuvred herself into the premier protector of ‘the Union’.  She certainly hasn’t made silly mistakes like Dugdale has (though the footage of her ‘advocating’ tactically voting Tory to kick out the SNP shows no such thing and seems like a desperate attempt by pro-Indy supporters to smear Dugdale and Scottish Labour).  Davidson, unlike Sturgeon (or for that matter Dugdale) has prominent media support.  We can be certain that the Daily Mail and it’s columnist who used to work for STV will be Davidson cheerleaders from now until May 2020.

If the SNP were to decide to park ‘Indyref2’, then this provides them with the ideal opportunity to freshen up their domestic policies and to regain some much needed grip on the job of government.  The reason why 12% of SNP voters from 2015 switched to Labour would be because of the SNP’s performance in Holyrood and a discernible switch to the right from the SNP since Sturgeon became First Minister.  It is true that the SNP have been the standard bearers of Social Democratic policies over the past 10 years.  However that was in the first two terms of the SNP in government.  Last year the SNP ran on an uninspiring ticket promising to do better.  There was no radical vision or legacy style policy within that manifesto, instead we have seen Sturgeon promise not to raise taxes (granted the powers under Calman does not give Holyrood the power to change separate tax bands, tax rises are across the board, however Sturgeon shut down the debate on public financing), to continue the Salmond policy of advocating a lowering of business taxes – for example Corporation Tax and APT Duty – and to u-turn on the SNP pledge from 2007 to scrap the “unfair” Council Tax.  Is it any wonder then that when a genuine left winger, like Corbyn, comes along that the MacNew Labour project that is the current SNP looks...  well... like MacNew Labour.

Alongside the lacklustre manifesto, the SNP’s big mistake at the General Election was to not promote their MP’s in the media. Instead we saw a campaign headed up by and with the public face of Nicola Sturgeon.  Rather than talk about what SNP MP’s did at Westminster and the fine work that they do, the First Minister inserted herself into a campaign...  and invited the narrative of her government’s issues to become an election issue.  Whatever you think of Angus Robertson (and I think he’s a good debater with the flaw of veering into Paddy Ashdown style piousness, though he’s not the worst in his own party) he really should have been much more prominent than he was.  His appearance at the BBC debate was too little, too late.

The SNP may have won the election here in Scotland, but it was a much more pyrrhic victory than May’s Conservatives bigger ‘victory’.  Instead of the serene march to a second referendum, there are now questions about the SNP’s direction of travel and about the political nous of the First Minister. Instead of a party with one unified vision, there is now debate. Whether it’s MacMillan’s night of the long knives followed by his own resignation, Thatcher’s obsession with reforming local authority financing and growing Euroscepticism or the chickens coming home to roost for both Blair & Brown.  Third terms are quite often the most difficult of the lot.  Unless the SNP make changes, then the curse of the third term could harm them too.
Posted by Allan at 13:00