In an election campaign where time is now very much of the essence (thanks, Wahabists!  Mind and enjoy the silence from your so called god now) I’ve had to roll the last two election leaflets into the one post.  Though, in all honestly both the Lib Dem’s and the independent candidate Paul Mack will probably be fight it out to not finish last.  Steven and Gillian from New Order, they aren’t. 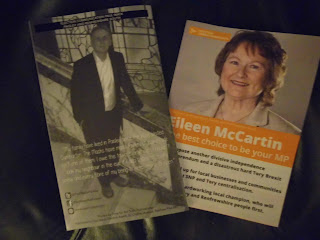 Once again Eileen McCartin is the Lib Dem’s candidate for this constituency, having stood in the Holyrood election in 2011, last time around two years ago and I think at last years Holyrood election too.  This time the Lib Dem’s are running on backing a second European Referendum whilst blocking a second Independence Referendum.  The worst of both worlds you could say.

Like Labour and the Tories, there are no real arguments for blocking a second Independence referendum in McCartin’s leaflet.  Though interestingly, McCartin’s leaflet claims that “we took the lead in the campaign against Independence across large parts of Scotland at the last referendum” somehow isn’t stimulating the grey cells.  Sure there were prominent Lib Dems, the late Charles Kennedy springs to mind, who were making a decent argument for a no vote but there were others who were prominent members of the Tory led coalition government ( Danny Alexander among others) reminding us how useless they were.  On the whole though, this was a Tory funded exercise with Labour faces prominent in the campaign.

The big problem with this leaflet is the argument being portrayed, that Brexit and Independence are extreme positions.  Given the failures in this country of centralist politics pursued by Blair and McCartin’s own Orange Book colleagues, it is disingenuous to attack parties and voters for looking for different solutions.  It is also extraordinarily hypocritical for the Lib Dems to call for investment in public services given they sold their souls to the Tories for ministerial limo’s.

The last contender, and the spoiler in Paisley’s stab at being the UK’s second all woman election (which makes Glasgow Central the only constituency with all women candidates) is the independent Paul Mack.  One of the last local councillors to appear in the ‘Rotten Boroughs’ column in Private Eye – Mack was a frequent name in those pages during the mid 1990’s alongside Hugh Henry and the SNP’s Bruce Fee as the old Renfrew District Council featured rather frequently.

Mack’s leaflet centres on the big issue in Paisley, much more than Labour’s – the proposed closure of the Children’s ward at the RAH.  Like Labour, Mack aims both barrels at the SNP calling the consultation process “An old fashioned stitch up”.  Quite where Renfrewshire Council’s former, Labour, leader Mr McMillan fits in with Mack’s conspiracy theory I’m not actually sure. Stooge?  SNP Patsy?  Mack doesn’t say.

As befits a candidate very much against politician largesse, Mack’s other pledges centre around transparency and public service.  There is, in all honesty, not an awful lot I can argue against, but it does raise questions about Mack’s conscience “(I) will be answerable and accountable only to the people of Paisley, not party interests in Edinburgh or London and still act in the best interests of my conscience, my constituency and my country”.

If we were being entirely honest, both of these candidates do not have a cat in hells chance of victory at some point on Friday morning.  The likely outcome here in Paisley is an SNP hold with a very much reduced majority – Labour do not look as if they will pull off the swing required to win here in Paisley.  That’s not to say Mack and the Lib Dem’s are irrelevant but in a truncated campaign like this, the temptation is there to squeeze the minority parties out in favour of the mainstream message.
Posted by Allan at 08:00