General Election 2017: Tale Of The Tape 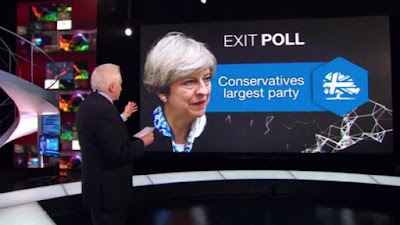 About 10 minutes to 6 on Friday Morning, Labour held on to the seat of Southampton Test.  This result made it mathematically impossible for the Conservatives to win an outright majority, confirming a second 'hung parliament' within three elections and confirmed the exit poll announced simultaneously on BBC, ITV and on Sky News as being an accurate forcast of what was to come.  We had to wait until about 9pm on Friday night for the final result, Labour gaining the seat of Kensington after a third re-count.

This gave us a final result of:-

A lot of the commentary has been about May’s failure to build on her inheritance from Cameron, about the poor election campaign and May’s ramrod refusal to engage in televised set piece interviews and debates and of course the incident which started the Tory rot – the manifesto including the so called ‘Dementia tax’.  However it should be pointed out how many votes the Tories still garnered in spite of a bad campaign

A share of 42.5% represents the highest share of the vote for the Conservatives for 25 years, while over 13.5 million votes is also the most votes the Conservatives have attracted since John Major won his election in 1992.  What has thwarted the Conservatives in their attempt to win a landslide has been the performance of Labour, who garnered their highest share of the vote since the second of Blair’s three election wins in 2001 (and is 4.8% higher than the last of their election victories, in 2005).  In terms of votes however, you’d need to go back to the Blair landslide of 1997 for the last time Labour attracted as many votes and the last time they had a net gain of seats.  You’d also need to go back to June 1970 for the last Election where both parties gathered over 12 million votes.

Whilst it is true that Labour have lost this election, they clearly have momentum now.  The Corbyn vision of a fairer, more equalitarian, society has attracted many voters including that constituency which previously did not vote in big numbers – the young.  It was this tempering of the figures in line with precedent which led to pollsters predicting 7%+ leads for the Tories in the days leading up to election day. Quite rightly, some Labour figures are speculating why Labour lost a third election in a row.  Though I suspect that the likes of McTernan, Chris Leslie & co (speculating that a ‘better’ leader would have won) won’t be speculating that they are precisely the reason Corbyn didn’t do better.  If anything cost Labour this election, look no further than McTernan, Dripping Poison, Tom Harris and the other bitter Progress wingers in the Punderatti or in politics who have spent two years talking down and undermining Corbyn.  After all, it’s no coincidence that Corbyn’s poll ratings improved substantially once election impartiality rules kicked in.  It is not now unconceivable that a second General Election with May leading the Tories could see her defeated and Corbyn entering Downing Street.

Of course, May is not the only politician who’s ‘victory’ is somewhat pyrrhic.  Here in Scotland, the SNP retained 35 of the 56 seats won in 2015 which still represents their second best election result ever.  Most of the media have (correctly) focused on both the 21 seats lost, the loss of big hitters like Alex Salmond (below) and Angus Robertson and the 13.4% swing to the Scottish Tories and have drawn the conclusion that this was a strong anti-Indyref 2 vote.  I suspect its a bit more complicated than that.

I think the turning point in the SNP’s fortunes can be attributed to the SNP policy on a second Independence referendum being brought forward if there was a “material change” in the circumstances of Scotland, such as “Scotland being dragged out of the EU against it’s will”.  As time goes on, the First Minister’s threat of a second Independence referendum in the aftermath of the EU Referendum looks more and more like two big tactical missteps.  While it is true that the galvanising effect of the Independence Referendum has now seen a coalescing of a pro-UK vote around the Tories, I suspect that the trigger for this result though is more to do with the SNP’s tying a second referendum to membership of the EU.

As I have said previously, to successfully make the case for “material change”, the pro EU vote in Scotland had to be at least 65-66%.  As it fell at 62%, my conclusion is that this did not provide Sturgeon or the SNP with the political space to pursue a second referendum and that the SNP should wait for a "material change" which Scottish voters can identify and strongly disagree with.  Instead, the SNP continued to pursue this policy and as a result have alienated both remain and leave voters.  They alienated Brexit voters, including 36% of their own voters from 2015, by sidelining and ignoring them.  They alienated remain voters by using their votes as a proxy to launch ‘Indyref 2’ – thus offending pro-Union pro-EU voters.  As a result, the most euro sceptic part of Scotland voted out the resoundingly pro-EU SNP and for the more Eurosceptic Tories, hence the defeats for Robertson, Salmond & Whiteford. 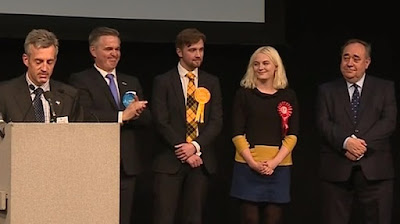 The punderatti and the commentators, prompted by Ruth Davidson, rushed to bury Independence and declare Indyref 2 dead.  I don’t think Independence or Indyref 2 is dead, what is clearly damaged beyond repair is the Sturgeon/Salmond grand plan for a referendum before the end of divorce proceedings with the EU.  This election is clear proof of what I’ve been saying since the EU referendum, that a second independence referendum is not winnable this side of Brexit.  If anything, this election result should act as a huge wake up call for the SNP.  For them, they should dial back the talk of a second referendum and have a long look at how they can win a referendum starting with a proper autopsy on the 2014 campaign.  I think there is one other factor at play for the SNP’s drop in vote, a factor completely unrelated to Independence.

The SNP themselves have run a pretty poor campaign, one not highlighting the work their MP’s did but putting their Holyrood team and its leadership front and centre, thus making the difficulties that the SNP government are having regarding health and education a part of the narrative of this election.  Clearly then the poor performance of the SNP government will be something they will now have time to put right before the next Holyrood elections. This also is the second campaign in a row where they have run a New Labour-esque campaign with included inconsistencies, a campaign which quite easily got outflanked by Corbyn’s Labour party. It could be argued that Scottish Labour have made a similar tactical mistake.  That Scottish Labour only picked up six seats is not a signifier of the SNP’s strength but of Scottish Labour’s refusal to campaign on the Corbyn manifesto.  If you look at the results, there are now 6 SNP held seats with majorities under 650 votes (Gethins in North East Fife, Wishart in Perth & North Perthshire, Glasgow South West, Glasgow East, Airdrie & Shotts and Lanark & Hamilton East) and in good place for a number of others.  Whatever ‘Scottish’ Labour types think of Corbyn, the policies he proposes are much more in tune with Scottish thinking than any attempt to ape the Ulster unionists and their Scottish copyists.

The result of this election has come slightly from leftfield, both the Tories thought they’d be on their way to a 70+ majority while the SNP, their social media cheerleaders and...  well... me... simply did not see the level of losses they would suffer.  I wrote a couple of weeks about 1997 and how that election was a gamechanger in the mould of 1945 and 1979.  This election has the feel of being the precursor election, where the pieces are moving into place.  With signs of the country moving leftwards and the SNP losing seats, maybe this is the election where the move away from the cosy right wing consensus at Westminster began.
Posted by Allan at 09:00