The general narrative of this election has been the apparent surge in popularity of Labour’s leader Jeremy Corbyn.  His run of out of his skin performances on debates and one on one interviews with local boy done well Andrew Neil and Jeremy Paxman and also that his policies are proving to be rather popular.  Whether this popularity translates into votes is quite clearly another matter, however the most perplexing aspect of this campaign is the reluctance of Scottish Labour to tap into Corbyn’s soft radical programme and use it as a driver to attract voters here in Scotland.  This brings us, once again to Ms Alison Dowling. 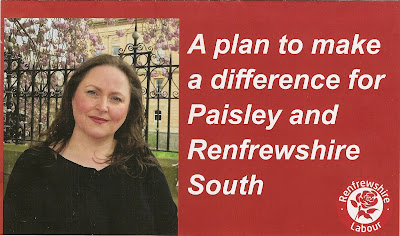 You may remember (given that this particular post is among the best read posts in the past month, you’ve probably read it quite recently too) that Ms Dowling first came to prominence penning an open letter calling for us to support the then local MP and shadow Foreign Secretary – Douglas Alexander.  That letter clearly worked a treat as Alexander...  er... was swept aside in the so called “SNP Tsunami” being defeated by the SNP’s own wunderkind Mhari Black.  It’s small consolation then that Paisley & Renfrewshire South is fourth on Labour’s winnable seats target list.  A swing of 6.2% would put Scottish Labour in with a chance of winning this seat.  And Labour have picked the health worker that penned that open letter two years ago.  What is it about nurses in this election?

Like the Tories leaflet, Dowling’s campaign fire is targeted at the SNP.  Hardly surprising given the SNP did win 56 seats last time out.  And like the Tories, there is a bar chart involved with both the Tories and the Lib Dem’s shown as small as possible (though to be honest, they did only pick up 7.6% and 2.2% of the share of the vote last time).  Unlike the Tories, Labour are attacking a party which purports to be the modern standard bearer of Labour (or centre left) values.  That there is so much political cross dressing between those two parties alone contributes to the most bitter, spiteful and hate filled relationship between two different parties in UK politics.  It’s a relationship that the English left certainly doesn’t get, and I personally think is akin to squabbling children.

As a result we have a leaflet attacking the SNP, but their record in Holyrood.  As I’ve previously pointed out, the SNP at Holyrood have adopted a New Labour-esque policy platform, their Westminster contingent have been much more recognisably left wing.  It is that political space which Labour are attempting to target.  The problem is that in attempting this, they have effectively sidelined much of Corbyn’s manifesto – with a section on “standing up for working people” being the only mention of Corbyn’s priorities.

While there are mentions of being opposed to a second Independence referendum, there is no mention of Labour’s stance on Brexit.  On Independence, like the Tory leaflet there’s no explanation as to why Labour are opposed to a second referendum.  Instead the equivalent to “Strong and Stable” is “divisive Independence referendum” – without recognition that the divisiveness is a by-product of neither side winning the argument on Scotland’s future.  It’s ridiculousness to the extreme to complain about divisiveness, life is divisive.  The problem is that both sides haven’t stopped campaigning; this is why we have such an entrenched Scotland-view.  With few hardy souls prepared to look at a different point of view.  Where there is more traction, I think, is the other phrase repeated in this leaflet “Get on with the day job”

There are however flaws in the approach taken by Scottish Labour in solely attacking the SNP.  The current hot topic here in Paisley is the proposed closure of the Children’s Ward at the RAH, a proposal put forward by Greater Glasgow Health Board.  The founder of the campaign to save the ward has called for unity and a cross party campaign in spite of Scottish Labour’s continued attempts to spin this to their advantage.  We see this here with Dowling pledging to “Protect the RAH” as the “SNP Government are threatening the closure of this ward”.  Given that Labour has representation on the GGHB committee which sanctioned this closure and made other decisions to downgrade the RAH in favour of the new Southern General hospital in Glasgow, this is rather disingenuous to say the least (and if anyone thinks that I think the SNP are completely blameless, see my previous post on this episode).

In only having a small, un-credited, space highlighting Corbyn’s manifesto, I think Dowling has made a tactical error.  I think this leaflet should have tapped into the main Labour campaign an awful lot more and I think it should have sidelined the obsession with a second Independence referendum (which isn’t going to happen this side of the divorce with the EU anyway).  Looking at Dowling’s leaflet, it’s a missed opportunity and like the Scottish Labour campaign as a whole may end up putting off voters thinking of voting Labour because of Corbyn’s manoeuvring of Labour to the left of centre.
Posted by Allan at 12:00