One of the long standing jokes of electioneering is the Lib Dem’s persistent use of bar graph’s to show that, in their view, “only they can win here”.  Normally these graphs are ludicrous because they downplay rivals and have an overinflated view of their own chances.  Here in Paisley & Renfrewshire South, the laughable graphs have arrived – but it is both the Tories and Labour that have used them. 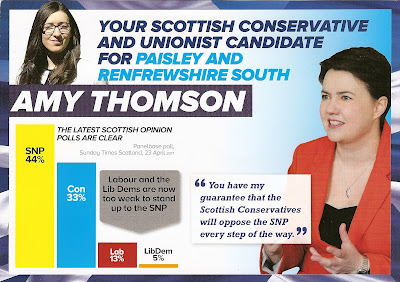 We will see Labour’s grab at comedy gold in the next post, but the Tories graph (right) is surprisingly prominent for a party whose Scottish manifesto is based solely on a two letter word.  It is also based, not on the last Westminster elections here (where the Tories finished a distant third to Labour and the SNP) or the recent council elections here (where the Tories finished third, 7% points, on first preference votes, behind Labour ) but on one Panelbase poll.  From April.  It may be inconvenient for the Tories to quote the recent polls but they are now in a fight for second place with Labour.  So much for Adam Tomkins rant at Blair McDougall to “get out of the way” of a clear shot at Kirstin Oswald in the constituency five minutes up the road from here.

The most surprising aspect of Amy Thomson’s leaflet is that being anti a second Independence referendum is not the entire leaflet as some of the leaflets from the Tories have been. Thomson’s leaflet does reference opposition to a so called second Independence referendum but also flags up the vague promises that all politicians make – campaign to secure local jobs and provide more opportunities for young people, support our local high streets and small businesses and to fight for a stronger national and local economy – yet for a party which intended to make this the Brexit election there is no mention of that referendum or of the phrase “strong and stable”.

While Thomson’s leaflet is clearly pitching to the so called ‘55%’, there is a strange quote on the front – “You have my guarantee that the Scottish Conservatives will oppose the SNP every step of the way”.  This is strange because there are actually some policy area’s that the SNP and the Tories share common ground on – low business taxes being a prime example (in another life both Hosie & Swinney would, I suspect, have been leaders in a centre right party in Scotland).

Thomson’s leaflet highlight’s the problem that the Tories have had in this election in that all of the eye-catching policies have fallen apart under scrutiny leaving very little in the way of selling points. Sure the Scottish Tories have alighted on a strong defence of the union as a policy position, and here any detailed case for being pro-UK is not forthcoming, but if you look past that there’s nothing but Thomson’s vague pledges.

This is a problem when the Tories policy positions are not popular positions.  They may not be the only party culpable in this, but a hard ‘Brexit’ is proving unpopular with big business, the Education industry, life & science businesses and other ‘saboteurs’.  Their policy on care for the elderly, the so called ‘Dementia tax’ proved to be an idea dead on delivery and the catalyst for the Tories disastrous campaign, while ‘austerity’ has not been taken off the table with cuts to the benefits budget proving to be not popular again.  What’s so far not received any coverage is the plan to remove dismantle the Serious Fraud Office, bringing it under government control and rolling it’s responsibilities into the National Crime agency.  An idea designed to green light all sorts of corruption in this country.

She may have mentioned the party she is standing for, but apart from being anti a second Independence referendum Thomson’s leaflet clearly disowns the campaign and manifesto her party are fighting in parts other than Scotland.  The vague priorities quoted do not stack up with the Tories plans and do not look credible when compared to the Tories record.
Posted by Allan at 12:00