A Big Week For The SNP

Scrap that.  An absolutely massive week for the SNP.

For most of this election the SNP have been squeezed out of the debate, everyone has been telling the electorate that Alex Salmond is irrelevant to an election to the Westminster election.  The strange thing, for a reputedly vociferous party, the SNP have more or less let themselves be sidelined.  Sure they were responding to “The Leadership Debates”, but they complaining about not being involved rather than showing why they should be involved. 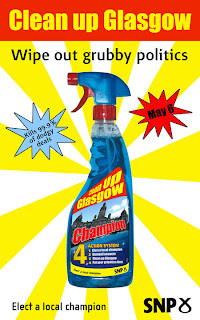 Even the stunt (left) involving the opening of John Mason’s office in Glasgow had no hard hitting spin.  After all the former leader of Glasgow City Council resigns for “health reasons”, before being outed as a cokehead, and before the various questions emerge about who exactly profited from his “arm’s length” companies (set up to perform key council functions), and the questions about where the money went.  There are questions to be asked, and the SNP should be playing on McKnacker and Glasgow City Council’s ram-rod refusal to investigate. This issue in particular sounds more and more like an episode of The Wire each day.

This week the SNP launch their manifesto.  Included will be their thinking behind their somewhat naff slogan of “Scotland’s Champions”.  Rather than meekly complaining about perceived cuts (which for people living under the current administration at Cotton Street is a bit rich, but…) the SNP should be aggressively targeting other things that could be cut.  In this respect they have made a respectable start with identifying Trident and ID cards as projects which the UK can no longer afford.  However, as the current debt level is supposedly in the region of £170 billion, this is only a start.

However, i seriously think the SNP have missed a trick with this election.  Salmond should have put the Independence referendum to the vote at Holyrood in the winter, and watched it fail.  His parties campaign for this election then should have been about the Union, and its (many) failings, flagging up the other parties belief in democracy as a result.  Had they pursued this strategy,they would have had a lot more exposure than the crumbs they have been given at the moment.

The SNP need to get back into the minds of the electorate.  With this in mind the manifesto has to address the concerns of Scottish people.  Most of all, they need to be seen to be relevant in this close Election.
Posted by Allan at 09:59