Round Three: It’s The Economy Stupid!

Different place, different channel, jeez we even had a set and title music which emitted how important the “Leaders Debates” should be, but like the previous debates, it was the bloke in yellow that came through.  Very possibly by his largest margin.  I think that Clegg has did the thing that Cameron had singularly failed to do since 2008.  Clegg, i think sealed the deal. 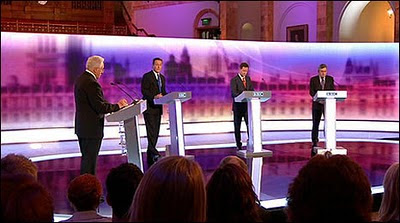 The moment that I think clinched it for many was Cameron’s ram-rod refusal to confirm Clegg’s assertion that his cap on immigrants would be unworkable because 80% of immigrants to the UK come from the EU.  George Osborne is talking his usual bollocks on this as I type.  He skewered Cameron on the Death Tax - “the most creative justification of tax cuts for double millionaires”.  On Cameron’s cutting waste initiative - “you can’t fill a black hole by getting rid of plant pots”.  And on Cameron’s attack on his (Clegg’s) immigration policy, he reversed last week’s jibe on Trident by telling Cameron to “Get real” over the illegal immigrants who have been here for 10 or more years, in the shadows.  The Lib Dem’s believe that these people should be offered a place in this country, out of the hands of criminals and into the hands of the tax-man as Clegg might put it.  Except Cameron & Brown, wishing to play the hard-man on immigration, dismissed this as being soft.  As i pointed out in an earlier post, there are two politicians who have pursued an immigration amnesty before, Ronald Regan (in the 1984 presidential election) and the current London Mayor Boris Johnson – not exactly loony lefties are they?  A better idea would be ensuring any immigrants have “landing money” – it works for Australia and Canada.

Cameron started well, but became more and more obsessed with dubbing Brown as negative and desperate.  His opening gambit  - “We’ve got to start making things again” – was such a no sh*t Sherlock moment, you wondered what pearls of wisdom would come next.  Obviously not the phrase regarding targets for cuts  “There are no sacred cows”, cause…  well that would be too honest.  Cameron did identify “the glossy leaflets…  the 7% pay rise for NHS managers” as targets for starters.  Cameron also stole my line about Fred the Shred, about Goodwin being knighted by New Labour (Cameron didn’t mention that New Labour also ennobled Denis Stevenson and Tom MacKillop).  Cameron also ruled out a referendum on joining the Euro, which seems to have been missed.

Brown on the other hand sounded like a guy who has forgotten that he has been in power for the past 13 years.  For example he said that there should be “No Life on the dole…  the Tories left a wasted generation on the dole” – conveniently forgetting that his policies have contributed to the creation of the Lazy Poor class.  As Cameron rightly pointed out “They remember who scrapped the 10p tax rate and who put pensions up by 75p”.  Rather bizarrely, Brown seemed to be defending the payment of Tax Credits to middle income families, which surely must be a target for cuts.  On bankers bonuses, Brown said that “we own the shares… of Lloyds and RBS” but did not specify how the government used its share in the vote for bonuses at RBS’s AGM yesterday.

To return to Clegg though, who has been the clear winner of the three debates.  His policy to raise the tax threshold to £10,000 should be a vote winner, the IFS believes that this policy provides the best incentive to work available at this election.  It is a policy that was mentioned 4 times tonight, 4 times more than Ashay the Lib Dem candidate for Paisley South mentioned it on Tuesday.  On the immigration question, Clegg’s policy is a sensible one, and possibly provided us with the closest Cameron is going to get to a Gillian Duffy moment, by not knowing his figures regarding his immigration cap.

We are now in the final lap before polling closes.  This time next week we will know who has won.  Cameron has (unbelievably) survived three rounds, but hasn’t sealed the deal yet – even though he appears to be in the pound seat.  Clegg has exceeded expectations, and might have the job of Leader of Her Majesty’s opposition in his sights.  The election may well end up being between those people.  After yesterday, Brown looked a goner.  Tonight he acted like a goner.  The question is can his party pull themselves off the ropes.  For the Conservatives, the Lib Dems, New Labour and the SNP it is still everything to play for.
Posted by Allan at 06:00

Were we watching the same programme Allan? Clegg seal the deal? He was hopeless. Floundering around over the economy and immigration. His rubbish about the 'old parties' wore thin. The liberals have been around for generations.

Not that I'm going to vote for any one of them, but I though Cameron came out best. He held his ground and at last he attacked the others.

I had wondered whether I had after all the coverage. Yep, the stuff about the "old parties" is a bit cringeworthy, but Brown and Cameron keep falling into that trap...

As for floundering around over the ecconomy, the £10000 threshold will put much needed liquidity into the econnomy, and i think their policy of closing tax loopholes addresses a problem the two other parties (and the SNP) ignore. On Immigration Cameron simply got caught not knowing his figures on the percentage of migrants coming from the EU.

Admittedly Cameron was strong on the question on Welfare reform - but you know as well as I do that any reform needs to be married to a change in the mindset of some of the people who work there. "Those who can work" - needs to be better defined as well.