The Economy Debate: The Paisley Version 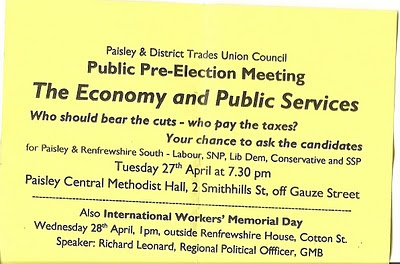 Representing New Labour on the platform was the Paisley North MSP Wendy Alexander, as her brother Douglas was aiding Gordon Brown with his preparations for the “Leaders Debate”.  Ms Alexander did not let us know whether her brother was playing at being Clegg or Cameron, nor did she let us know why the Paisley North Westminster candidate Jim Sheridan did not appear.  As things would turn out, this would probably be a blessing in disguise.  Uninvited, but appearing in the crowd was the independent candidate, and former Labour councillor, Paul Mack.  Once he made his way to the podium, after complaining about being a leper, that made it 6 on the stage.  As an aside that also made it a total of two candidates who have appeared in the pages of Private Eye (Alexander and Mack – hmmm need to dig that one out).  Also in the crowd were the SNP candidate for Paisley South Andy Doig, and the Labour councillors Terry Kelly, Eddie Devine and Jim Jim Sharkey.

Truth be told, Alexander was the most impressive performer.  Like some sort of wierd fairy, she made all of the things her government should have done appear as if these were things that will be done.  She talked about bankers bonuses and regulating those without mentioning Paul Myners giving the go-ahead to Fred Goodwin’s pension.  In fact, i don’t think the words Fred Goodwin passed her lips once.  She talked about tougher regulations for the Banks, but forgot to mention Brown’s mantra as Chancellor – light touch regulation.  She did throw an interesting curve-ball which if it is official party policy will cause the SNP some discomfort - “We will not sell off Scottish Water”.  She also stole my description of the Tory cuts agenda.  As opposed to Scorched Earth, Ms Alexander described it as “Slash & Burn” – which begs the question, does she have Generation Terrorists on her I-Pod?

The Tories, it is fair to say will not be winning any of the Paisley seats.  However the representative gave the impression of playing to type – if only he had come on to “The Imperial March”.  He did make several serious gaffes though.  He claimed that there would be a sterling crisis “… by 9am on Monday May the 10th” if there was a hung parliament, and that Britain would be like “Greece with worse weather” – which is not a great endorsement of the party which has stolen your economic policies for the past 16 years – and is kind of damming with faint praise of your own party.  Alexander was sitting smirking at all of this, of MacCaskill’s next gaffe I'm not sure what her reaction was.  Talking about Tory plans to cut public services MacCaskill said that there were “No sacred cows in Scotland…  with the exception of the NHS”  which is a manifesto pledge that i somehow have missed Boy George utter.  Unfortunately i missed the gaffe about immigration, which Terry Kelly picked up on.

It has to be said as well that the SNP will, i think, do rather badly in both Renfrewshire seats.  Renfrewshire has been run by a SNP/Lib Dem coalition since 2007, and have had to cut their cloth accordingly in the face of the Council Tax and escalating PPP repayments.  The choice of cuts made have proved to be controversial and, as parents were queuing up to point out last night, drives a coach and horses through Salmond’s “Scotland’s Champions” slogan.  The cut which has sunk the SNP’s hopes of winning any of the Paisley seats is the decision to cut school transport for all pupils apart from those living over 3 miles from their school, which many parents believe puts the safety of their children at risk.  Mags MacLaren (the SNP candidate) simply looked ineffective.  To add insult to injury she attempted to justify Renfrewshire Council’s use of consultants, which adds £1 million to the council bill.  Andy Doig was complaining that this had nothing to do with the Westminster election.  Well, yes… but it did expose the credibility gap at the heart of the “Scotland’s Champions” slogan.

The Lib Dem candidate Ashay was clearly a first timer, as he took his time to get to his point, kind of like Boris Johnson without the Estuary/RP accent.  I’m not really sure his message of Tax reform, sustainable and appropriate cuts (no mention of Cleggs savage cuts here) cut the ice here, which is a shame as it is a message that SHOULD work here.  He also was the only politician to answer my question (“Why do the panel believe that the public perception of benefits fraudsters is harsher than the perception of tax evaders?” – so good i had to mumble it twice!!).  Ashay also made in interesting comment which must have punctured the ego of the Tory - “The only time the markets have dipped was when George Osborne spoke”.  The Lib Dem leader in the council Eileen McCartin threw in interesting nugget which went unnoticed – that the 2.5% VAT cut in 2009 took, at very short notice, £4.2 million out of Renfrewshire Council’s budget.  I wonder why that card hasn’t been played before?

Of the rest, Kerr the SSP chap was a bit Dave Spart in places as he hit the traditional socialist targets of bankers and greedy MP’s.  Paul Mack’s raison d'être appeared to be to tap into the public anger over MP’s expenses, which with all due respect when we are facing a huge deficit with the economy, is not the main picture, but only a part of the picture.  In any case he did not exude the gravitas required, announcing his entrance and any time he spoke with very bad jokes.  Truth is last night’s meeting was all heat and no light, much like the rest of the campaign.  New Labour didn’t make any mistakes, or say anything that might cost them votes.  The unfortunate thing is that their economic record is more culpable than the SNP, yet it is they who are on the ropes.  Scotland does need champions, but first it needs politicians to pull their fingers out.
Posted by Allan at 21:30