May the 6th Be With You…

So this morning Gordon Brown fired the starting pistol for what is already shaping up to be the closest Westminster Election campaign since 1992. 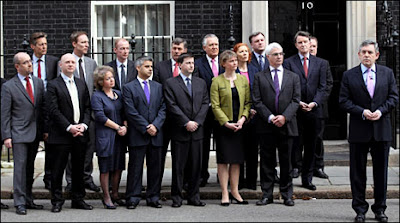 His starting pitch to the electorate, that New Labour had been getting the big decisions right began to unravel  straight away when a lowly government minister remarked that it was for the best that the UK emerged last from recession.  Coupled with the fact that the Treasury ceded to a Freedom of Information request regarding the sale of UK gold in 1997 made it a rocky welcome to Election 2010 for Ed Milliband on today’s PM.

Brown’s decision to wait until spring 2010 has paid some dividends if the polls are to be believed with the opinion polls now firmly in the margin of “hung parliament” territory, compared to before Christmas when the polls all pointed to a large Cameron victory.  In electorial terms, Cameron has a huge mountain to climb, with Cameron having to win 120 seats to win a majority, though notionally this has been eroded to around 115 due to boundary changes to some constituencies. With a 6.9% swing needed to form the next government alone, factoring in as well the fact that Lib Dem MP’s are difficult to remove, well a Hung Parliament looks to be the favourite.  Cameron began by saying that the country needed better than Brown.

This Election, as well as being the closest since 1992 is also the most relevant post devolution Westminster Election, as the economy is by far and away the key issue for many people.  There is a huge deficit in the public finances, caused by saving the banks (and just look at the gratitude shown by these banks), the issue should be how we go about reducing that deficit without causing serious damage to the country.  To this end the nationalist parties have struck up a more formal election pact for this campaign.

The SNP slogan is “More Nat’s Less Cuts” – with Salmond talking up the SNP as Scotland’s champions.  I know we have TCF Champions in my work, and I remember certain people “Championing” bands (ie Steve Lamaq used to “Champion” Blur, does anyone know if the NME still uses this phrase?), but Scotland’s Champions sounds like a cross between naff 60’s show “The Champions” and a certain dire ambulance chasers advert which gets heavy rotation during day-time TV.  Due to the SNP’s poor election performance in 2005 (where they got 6 seats out of about 17% share of the vote), they would have to put on a further 16% share of the vote in order to smash through their target of 20 seats.  An 18% swing to the SNP would see them gain 30 seats, and just a thought, might trigger a constitutional crisis.

My own prediction is that I think the Conservatives will defiantly end up as the largest party, whether they win an outright majority depends on whether the “Old” Labour vote swing’s behind New Labour, or whether Old and New fall out once again.  Just don’t ask me who i’m going to vote for.  I’ve still got 30 days to make my mind up.
Posted by Allan at 20:59