Round Two… Give Me Some Gravitas!

Honestly, some of the set designers on these debates really need to stop recycling bits from other show’s.  I mean, look at that set (below), doesn’t it look like cast offs from Britain’s Got Talent. At least BSkyB had the nous to have some music that oozed gravitas.  That’s what we need guy’s, GRAVITAS! 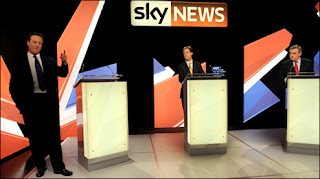 Gravitas is precisely what has been missing from these “leaders debates” – even though Clegg won last week’s debate by a mile.  This week’s debate was a lot more nip and tuck, and a lot more cut throat.  There were policy differences, but for Angus Robertson (of the SNP) to come on to BBC News 24 and say there was no difference between the parties, say with the replacement for Trident, was plainly ludicrous.  Conversely there was no mention from the SNP’s Westminster leader of the parties near agreement over Europe.  Nigel Farage, the UKIP candidate for Buckingham mentioned that straight away.  Robertson should have also mentioned the leaders cosy relationship regarding Afghanistan.

The debate itself was a spiky one at times, and straight out of the traps was the old clunking fist himself.  First up was that question on the European project, and Brown played the economic card straight away by mentioning the 3 million jobs that (apparently) depend on our membership of the EU.  Clegg played the security card, by mentioning that we would need to work together regarding combating terrorism, climate change and Banking regulations.  Cameron parroted the mantra of every Conservative leader since John Major, of being in Europe but not run by Europe.  Quite how this squared with Cameron’s hissy fit moment in taking his Conservatives out of the main Centre-Right group in the European Parliament has never been adequately explained, and Cameron failed to do this again tonight.  Clegg showed his Yorkshire credentials in calling Cameron’s European Parliamentary colleagues “nutters and homophobes”, tactfully missing out the other allegation that could be thrown their way – Nazi sympathisers.

While Clegg and Cameron exchanged blows over Europe, Brown unveiled his key message of the night “You know (Clegg & Cameron) remind me of my two young boys squabbling… I’m afraid David is being Anti-European and Nick is being Anti-American”.  Brown was very aggressive tonight, at one point telling Clegg “I have to deal with these decisions every day and I say to you Nick, Get real” over his Trident policy, and demolishing Cameron’s manifesto with the phrase “Big society at home…  little Englander abroad”.  Brown most of the time underlined his experience in dealing with other countries, at attending conferences and summits.

While Brown was being forceful, Cameron was inviting people to imagine the near nightmare scenario of “If I were your Prime Minister…”.Brown’s forcefulness nearly came unstuck over the furore over leaflets which were scaremongering over various Conservative cuts.  The specific allegation was over claims that the Conservatives would axe free eye care for pensioners, Brown claimed that his leaflets did no such thing.  Yet on page 3 of Douglas Alexander’s election leaflet “Labour has delivered the winter fuel allowance, cold weather payments, pension credits, free TV licences and free bus passes.  They have all helped make life better for local pensioners.  The Tories would be a change local pensioners can’t afford”.  the inference being that all of these schemes would be at risk under the Tories.

Brown led the first part of the debate, but Clegg came back into it in the second half.  The Pope question was possibly Clegg’s launch-pad with a well though-out answer which is fairly close to my own views on the subject.  His story about pensioners going on to buses not to go anywhere but just to keep warm should have shamed Cameron and Brown, as they do not believe in further regulation of the energy companies.  Especially after the above arguments, which Clegg described as “a game of political ping-pong”.  Clegg also landed some blow’s regarding the Banks and what to do with them, Cable’s long term policy is to separate the “casino element” of the banking sector from the “High Street” element.  With these arguments, and the policy of an immigration amnesty (the patent for that one coming, from of all people, Ronald Regan), Clegg won this debate by a nose.

While Cameron and Brown improved their performance from last week, with Brown edging past Cameron, the most improved performance was from Angus Robertson, the SNP’s Westminster leader.  Gone was (for the most part) the whinging, with it replaced by some valid arguments against the points made in the debates.  This debate (on Foreign affairs), and next week’s on the economy, are certainly debates which should have featured the SNP/Plaid Cymru in some capacity. With 13 days left of campaigning, time is beginning to run out on the parties to make their breakthrough.  I’ve not made my mind up who to vote for yet, i imagine that I'm not alone in that view.
Posted by Allan at 00:01