For many the current election campaign caught light with the “leaders debate” last week.  For me, it would be the culmination of that, receiving my invitation to vote and on Saturday receiving my first election leaflet. 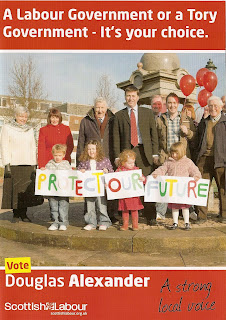 To date Douglas Alexander’s leaflet is the only one that I've received (Are the others scared? They should be).  It’s full of such fantastic gem’s like “The General Election is a two horse race.  It’s a straight fight between Labour and Tory.  A vote for any other Party would let the Tories in by the back door”.  Clearly as opposed to leaving your back door open will let the Tories in through the back door.

The best bits are inside though.  “I will work hard to bring new jobs and investment to Renfrewshire” – Since Alexander was elected as MP for Paisley South, Unilever-Best Foods left their plant to the north of Glenburn, and recently BASF announced plans to scale back their Ciba plant in Hawkhead.  The Unilever plant having been a landmark in Paisley since after the War when it was originally the Brown & Polsen food plant.  This statement does not fill me with confidence bearing in mind the white flag the government ran up with regard to the decisions by Cadbury to sell out to Kraft and the Diageo decision to leave Kilmarnock.  Funnily enough, David Cameron outed the Diageo Chef Executive Paul Walsh as a Labour business advisor a couple of weeks ago.  Walsh being one of the 1000+ businessmen who signed the Tories letter against the NI tax rise.

Another pearl of wisdom from Alexander is “I will campaign for much needed investment and regeneration in Paisley & Johnstone town centres” – Under a New Labour led council, the rot started.  In 1997 the council decided that it would be a great idea to make the High Street and other adjoining areas a pedestrian zone.  This made Paisley look like something of an identikit town, a tad generic.  The council’s next step was to keep business rates high, and keep parking rates high.  These measures combined to act as a disincentive to people to shop in Paisley, and the business rates acted as a disincentive for businesses to set up in Paisley.  The removal of New Labour does not appear to have worked.  Perhaps due to Paisley people suffering under the economic policies of New Labour.  After all, alcohol prices went up again recently…
Alexander also pushes the “tough on Crime” button with “I’ll work with local communities and support our local police in tackling anti-social behaviour and making our streets safe” – How?  In the estate I reside in, anti-social behaviour has got out of control.  Young adults roam the streets, with nothing to do.  At weekends, “energy juice” is acquired and drunk.  Yes Anti-social behaviour needs to be tackled, but crucially there needs to be an alternative to the drinking/drugs/anti social cycle provided.

The most interesting thing about this leaflet is that it picks out the unpopular parts of the Council’s activities and makes hay of the current Council’s failings, the slogan on page 2 is “Stop the SNP Ripping off Renfrewshire” .  Of course the current council is SNP/Lib Dem led, and there is genuine anger at some of the decision’s that have been made.  However there is little mention of the record of the current Government, which wee Doogie is a member of.  There’s no mention of, say Light Touch regulation, which is a factor in bringing about the current recession.

There’s no mention of the bank’s bale-out, which is a huge factor in the current deficit of £170 Billion, not even a mention of one of Paisley’s success stories gone sour – Fred “The Shred” Goodwin.  Then again the FSA are still to catch up with the Four Horsemen of the Economic Apocalypse, or anyone else associated with them.  There’s not even a mention of the glorious PFI/PPP scheme’s which delivered new schools to Renfrewshire.  Probably because most people now realise that these projects were completed at vastly inflated sums, like buying a house on HP.  Not even a mention of the current governments role in the mass closure programmes involving post offices up and down the country, or that they would privatise the Post Office once economic conditions are less adverse.

He probably has seen your post or at least been told about it. Terry has slagged me about wee martians doing 911 and its all the fault of the English stuff instead of answering questions as usual re my comment on his site so he has probably read mine as well.

They just ignore intelligent questions or posts so Alexander like Kelly will just ignore your email and blog or you may be (un)lucky to get an anonymous ignoramus comment(s).