The Prospective Champion? – The SNP’s Leaflet

For such a closely fought election, it is somewhat surprising that to date, I have only had the two election leaflets.  Last week saw local incumbent Douglas Alexander’s election address.  The second election address received by myself is from Andy Doig, the SNP challenger to Wee Dougie.  Mr Doig faces an uphill task to unseat Alexander, a swing of around 17% is required to win, as he takes Alexander on for the second Westminster election in a row.  Indeed Doig has a couple of dig’s at Alexander in his leaflet - “Andy is determined to be a ‘hands on’ MP” and “I will be here in the constituency, not absent for much of the time”. 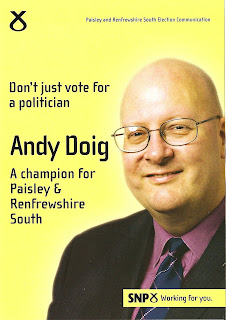 The main theme of the election leaflet is protecting Scotland from the cuts to come, which is a localised spin on the “Scotland’s Champion’s” slogan the SNP have gone with for this election.  Doig rightly mention’s the game of “my cut’s bigger than your cut” which all of the main parties have been playing.  Semi forgotten has been Nick Clegg’s gaff before their conference last year where he called for “Savage cuts”, which Doig mentions here, but does not play very much on.  While Doig says “All the London parties have made it clear that they will cut Scottish services across the board”.

Apart from a mention of “Labour’s recession” -there is surprisingly no recrimination meated out to the people who took the UK to the brink of bankruptcy.  There’s no mention of New Labour largesse (GARL, which remember was not popular in Paisley), or of New Labour complacency in believing that the Banks would regulate themselves – after all which party ennobled Goodwin, McKillop & Stevenson?  There is anger towards the greedy bankers, who will – at the end of the day – will be responsible for the cuts, just to keep their bonuses rolling.  Surprisingly not nearly prominent enough is the GERS figures relating to Scotland subsidising the rest of the UK.  Doig quotes figures where “Scotland has had a surplus of £2.3 billion over the last three years where figures are available”  - which begs the question, what happened to the SNP’s breakthrough slogan “It’s Scotland’s Oil”?

Unlike the other parties, the SNP have identified savings, which Doig points out in his leaflet.  Millions are wasted on nuclear weapons, and ID cards, both of which are popular target’s in Scotland, and unaffordable in recession Britain.  According to Doig “Labour’s plans for the new nuclear weapons for the Clyde equals the cost of 10 years funding for the Scottish NHS”.  This is an admirable start, and something I agree with.

The closest Doig gets to campaigning for an Independent Scotland, which is disappointing as a federalist and an independence sceptic who is open to persuasion, is his pitch on page 4.  “Scotland’s resources have been used by successive UK governments to bail them out of their boom – and – bust economic policies and recessions throughout the years.  Independence is the natural state for any nation…  only with independence can we remove unionist plans for massive cuts to Scotland’s budget…”.  As I’ve said before I think the SNP should have used this election as a referendum on the union.

Andy Doig’s leaflet correctly identifies the key issue of this election – cuts.  It is a tad vague on how those cuts are to be prevented, or how the right cuts are to be put in place.  The unfortunate thing for Doig is that his party has a record in Holyrood to defend, and an administration in Cotton Street which unless he acts will act as a millstone to drag down his electoral chances.
Posted by Allan at 10:59

I just got the same leaflet this morning along with the Tories, Lib-Dems and Paul Mack's.

These will all just go in the bin in most households as junk mail - that is why Labour sent theirs out separately.

Yes the usual wishy-washy leaflet from the SNP locally that would not motivate even a nationalist out to vote for them.

Andy is a bit of a numpty as well and is just a typical example of what is left of the SNP in Renfrewshire.