Tonight ITV piloted a new game show where the winner gets a cuddly toy, a country house, a town house in the centre of London and the keys to run the country.  Tonight’s contestants were Dave from Witney, Gordon from Kirkcaldy and Nick from Sheffield (below). 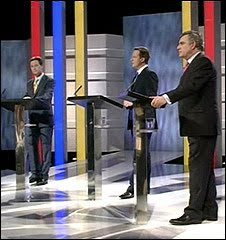 Actually that’s strictly speaking not true, though the leaders debates did have the air of some sort of cheesy game show at the start of proceedings.  I did expect sarky invigilator come host Alistair Stewart to say David Cameron…  COME ON DOWN!!!! at some point.  But thankfully the politics took over, even though it took about half an hour for the debate to actually get going.  The first question was about immigration, and already Nick Clegg was out of the traps with his “good immigration and bad immigration” quip, which sounded a bit Chris Morris.

Early polls suggested that Clegg was the winner of the debate, his body language suggested empathy, and he put forward a lot of policies which make sense.  Cameron did talk a lot of sense as well, particularly when he talked of crime and when he told the heartbreaking story of the burglar who set fire to the settee in the house he was stealing from, committing a murder in the process.  Where Cameron fell down was on economic policy, where the National Insurance rise/scrapping argument was rather bulldozed by Brown.  After all, as Brown pointed out “You can’t airbrush your policies like you airbrush your campaign posters”

This did not prevent Cameron from seeding his claims about the proposed NI rise.  Clegg also made the excellent point that tax reform is required at the top end and the bottom end.  Again Cameron’s claim that a tax cut for the poor was to expensive at this point was put to the sword by Clegg when he mentioned Cameron's proposed millionaires tax cuts.  I’m surprised Clegg failed to mention Brown’s income tax rise for the low paid in 2007 (when he scrapped the 10p tax band).

Brown and Cameron were firmly put into their place by Clegg’s ripostes' to the question of MP’s expenses, Clegg brought up the spectre of the flipping MP’s, some of whom have decided to leave parliament.  Brown and Cameron unveiled their own proposals to clean up Westminster, but it was here that i noticed the phenomenon known as “I agree with Nick”.  Brown repeated it ad nausium at this point, only for nick to point out that these measures could have been in place already if only you hadn’t spiked it.

So… first impressions.  Cameron made a lot of good points, on Crime mostly.  Brown looked anxious to get his point across, at times earning a tasering from sarky Alistair Stewart.  The format at times though went against Brown,who’s body language came straight out of the Blair book of body language (the hands, the movement etc…).  The winner though was the boy Clegg, who put forward a lot of good policy ideas, and seemed to successfuly attack the other leaders ideas.

Oh and by the way.  Little memo to the SNP.  Rotund whinging does not go down well with potential voters.  To quote the American golfer Bobby Jones, “We all have to play the ball from where it lies”
Posted by Allan at 23:30

Great summary Allan. Love your setting as a game show because that's what was said to me when I came in tonight. "The game show was pretty much as expected."

We all have to play the ball from where it Lies
thats ok providing its you that put the ball in that place. !!!!

Good article apart that is from your cheap shot at the SNP.

If you want to talk about whinging take a look at Gray, Kerr, Murphy and their constant anti Salmond bleating.

Your use of the word "rotund" is a wee bit predictable and adolescent.