The Final (ish) Result Of the Get Real Election

With the last of the election results in (the postponed constituency excepted), the final (ish) score looks like this…

New Labour have fallen below the 30% barrier for the first time since 1983, they have shelled 5 million votes since Blair’s first landslide win 13 years ago, yet there is a sense that it could have been so so much worse, particularly as once again they are reliant on a large contingent from Scotland.  Of the 258 seats won, 41 will be Scottish.  Wales will send 4 less New Labour MP’s than they did 5 years ago.  For them, they need to identify why they have fallen below even the amount garnered in defeat in 1992.  If Brown is to resign as New Labour leader next week, the choice of replacement between David Milliband, Alan Johnson, Ed Balls and Ed Milliband is vital for the future direction of the walking corpse that is the old Labour party.  I thought last night that Darling is a name not discussed as a successor to Brown, and that Darling might be an interesting proposal. 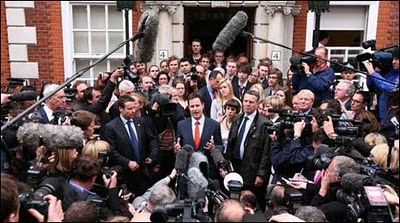 The Lib Dem’s have had something of a topsy turvy night.  The garnered their highest amount of votes under the Liberal Democrats banner, yet contrived to lose 5 seats.  David Steel thought that the Lib Dems lost momentum and votes in the days leading up to the vote, but was unsure why.  I suspect, as i mentioned last night that the Lib Dem’s immigration policy, the perceived lack of clarity regarding their “Amnesty” policy – may have cost them votes.  I also think that Clegg’s unnecessary horse trading might have put people off as well.

The SNP had a mixed night too. They held on to their seats from the 2005 election, with increased majorities.  But they failed to take any of their target seats, with swings away from the SNP in all but 3 of the SNP’s 14 target seats.  There are reasons for this, which I will look into at a later date, not least the poor choice of slogan, “Scotland’s Champions”, which did not play well in Renfrewshire (where we have an SNP/Lib Dem council making very unpopular cuts), or in Glasgow, where the GARL issue fed into New Labour’s “Ripped-Off-Glasgow” campaign.

As Brown and Cameron began their amorous advances on Clegg as the day went on, it has looked more and more like Clegg and Cameron will find common ground and stick with it.  For me the Lib Dem’s should have three priorities ahead of Electoral Reform.  They should press for reform of HMRC, tightening up the various tax loopholes which sees an estimated £20,000 million off shored by various companies, they should press for reform of Income Tax, with the implementation of the £10,000 tax threshold (which will release money into the economy, a lot of which will return to the Treasury in the shape of Duty on cigarettes and alcohol and VAT).  The Lib Dems should also press for targeted cuts rather than the scorched earth policy of George Osborne which would set the UK back years in terms of damage to our infrastructure.

By the looks of things the balanced parliament outcome reflects the uncertainty of the economic situation this country is in.  For that, the politicians only have themselves to blame for hiding the truth and playing to the Bankers and Traders in the City, and as such it it they who should get real as they play with our lives.  Depressingly though, this result means that this new parliament is unlikely to last the full term.  I think, and I’ll stick my neck on the line here, that this parliament will last just beyond next May’s Holyrood election and that there will be another Westminster Election before the end of 2011.
Posted by Allan at 20:01