Amongst all the hysteria emanating from the so called “left” here in Scotland, there are several facts that have been utterly ignored in the hyperbole surrounding the construction and appointment of the current Con/Dem government.  But then when we are talking about Margaret Curran, what do we really expect? 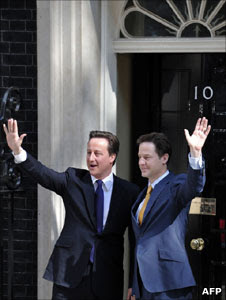 The first thing is that it is now clear that this incarnation of Tory government is not the hard-line Thatcherite style government which New Labour were all reading us bedtime scare stories about.  Remember kids, don’t look under your bed, there might be a clockwork robot, the Vashta Nerada or worse George Gideon Osborne hiding under your bed.  This government looks like it is a throwback to the old style 1950’s pragmatic one nation Tories, except there is a radical-left of centre streak which is a pleasant surprise.  Indeed in some areas it looks more left wing than New Labour ever did.

Brown is not the only thing to have gone this week.  Since Cameron took the Queen’s invitation to form a new government, the hated ID cards have bitten the dust, as has the DNA database.  The third runway at Heathrow, which BAA had argued as being necessary has been scrapped.  It should be noted that while most Scots voted against a Conservative government, they also voted for the continuation and implementation of the aforementioned deeply unpopular policies.

On the way in will be a phased introduction of the £10,000 income tax threshold, championed by the institute of fiscal studies alongside this very blog, is on its way.  We will also see a “clampdown on unacceptable bonuses”, and a committee will look at “structural Banking reform”.  There will also be full implementation of the smoke and mirrors act that was the Calman Commission.  Personally, I think the next step should be full fiscal autonomy (with oil revenues included – after all to use an old advertising slogan, “Its Scotland’s Oil”).

Calman isn’t the only change to the “constitution”.  The Next Westminster election will, if the coalition survives, happen on Thursday 7th May 2015, with fixed terms of 5 years from then on.  I wonder why this has been announced without debate?  Why is the term 5 years and not 4, and why has the first Thursday in May become more desirable than, say, the 3rd week in June.  Of course if the next election is to be held on that date, then it will happen on the same day as the Hollyrood election after next year’s one. Already the amendment to the No Confidence debates has caused stirrings in each party, with 50%+1 having been scrapped in favour of 55% being enough to bring down a government.

The overall problem facing this administration will be taming the deficit caused by New Labour’s willingness to bale out the likes of Fred Goodwin and the other bankers.  Cuts will happen.  How the cuts happen, what is cut, and the reaction to the cuts will be, i think, be how this administration is judged. This administration has acted struck the right note so far with how it has operated.  Any retreat into Thatcherite glee at the cuts will destroy the good impression that this Government has made so far. It is only then that i see the wholesale evaporation of Lib Dem votes.  However, let us not forget that this recession has been caused by, and exacerbated by New Labour.  Some dignified silence from their Scottish apologists might be advisable.
Posted by Allan at 12:59