…  Which leaves us with Peter Mandleson left of the original architect’s of New Labour.

To be honest, i wasn’t expecting to be writing about any runners and riders regarding the succession to the leadership of the successor party to Labour.  Well…  at least until the end of the week anyway.  For the moment though Brown is still prime minister and New Labour leader. 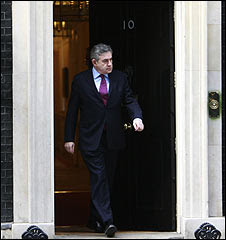 But the last couple of hours has been about Brown stepping aside.  Amongst the “obituaries” for Brown, the point has been universally missed that his Premiership was sunk by events sown by…  er… the former Chancellor Gordon Brown.  It was Brown who set up the useless financial regulator the FSA, and who favoured Thatcherite style Laziez Faire regulation of the financial sector.  It was Brown who chose to raid peoples pensions to plug the hole in the finances in 1997, rather than put income tax up.  And it was Brown, in his last act before moving into Number 10, who doubled income tax for low earners by scrapping the 10p base rate.

So, who will be the next leader of New Labour.  As I said yesterday, i don’t rate David Milliband (too lightweight), I don’t rate Ed Balls (Oily two-faced arse), I don’t particularly think Johnson or Straw have the gravitas required, and Ed Milliband should clearly still be in school.  Alistair Darling’s handling of the economy has been OK, he should have reversed the 10p cut rather than cut VAT to 15% though, and he shouldn’t have dithered so much over Northern Rock (I personally think we should have left the banks to burn), but the point is Darling might actually be one to watch here.  Crucially his reputation is relatively intact as a safe pair of hands (And right on cue Jeff Randall has made just this point on BSkyB)

Someone else who should be watched is Harriet Harman.  She surprisingly came second in the deputy leadership elections 3 years ago, beating the aforementioned Johnson.  She is a favourite of Labour’s women, and crucially is not clearly a Blairite (losing her job after sending her children to a fee paying school, months before Blair did the same thing) or a Brownie (Brown apparently didn’t know what to do with Harman when she won that election).  I can easily see Harman emerge as a more credible candidate of the Left than Balls (who isn’t really that left wing, its just that union money gives him that veneer).  Just as long as she tells hubby to keep his mouth shut, as anyone who saw Jack Dromey’s performances over the weekend can testify.

While I have been writing this the Tories have offered a referendum on Alternative Vote to the Lib Dem’s.  It is now obvious that THE stumbling block is electoral reform.  I’m not really sure which planet the Lib Dems are on, but let me just remind them of a few facts.  We are in the most serious economic crisis since the 1930’s, therefore the priority should be reformation of HMRC, fairer taxes, targeting cuts which will not set the country back decades and generally setting a course back from the brink.  I may well be alone in thinking this, and please do feel free to let me know otherwise, but there’s no settled will in the country for electoral reform, just political reform.
Posted by Allan at 20:05