More From The Group Of Death

“Italy striker Luca Toni scored with two headers to sink Scotland in the Euro 2008 qualifying match in Bari. The towering Toni was left unmarked to power in an early goal from a Massimo Oddo free-kick.
Scotland rallied briefly in the closing stages of the first half but Italy controlled the game for long spells. After an intensive period of pressure from the World Cup winners, Toni again found the net with ease after slack Scottish play on 70 minutes.”
The thing about football is that you can watch the same game, and yet come awa

y with different conclusions. Saturday’s game is a rubbish example because by common consent, Scotland were rubbish, and were lucky to get the 2-1 win over Georgia (too many players just didn’t perform). Last night on the other hand, I thought Scotland played well, certainly better than the quote from the BBC Website would have you believe. However the difference was that Italy are an experienced collection of players who are exposed to football at the highest level, and they are the world champions (despite being 2nd seeds in this group when the draw was made 14 months ago).
Granted, the first goal was a defensive mistake. Free kick from the right finds Toni in some space, and he headers past Gordon. At that point it looked like Italy were in the mood to sweep Scotland aside. Scotland however dug in and got themselves into the game, creating a couple of chances before the break. Italy controlled the second half, and could have been home and hosed when di Natale was sent through not just once but twice, only to be denied by Gordon both times. The second goal once again came from the right as Camoranesi crossed for Toni to head home again.
The big plus out of these two games has been the emergence of the Hibernian midfielder Scott Brown, who gave urgency to the Scotland midfield on Saturday (when he came on), and was excellent getting forward to support Kenny Miller up front last night. Barry Ferguson, it has to be said, was better than average last night (why do Scottish Footballing pundits rate him so highly?). On the downside, Alexander continued to be as poor as he was on Saturday. Teale was OK, but Hartley was completely anonymous.The plus side from having a group like this is that you can create a side, hot house a couple of players, and find out exactly how good your players are without the stress and expectancy of qualification. For McLeish, like it was for Smith, we may lose like we did last night, we are still in a win-win situation.
Posted by Allan at 21:27 No comments:

Georgia on my MInd

Hullo. Sadly not the state in Americas deep south, rather the former member of the USSR, who visit Scotland tomorrow hoping to upset the odds. With wins against the Faroe Islands, Lithuania and France, the form book suggests an easy win for my fellow countrymen in Alex McLeish’s first game in charge.

This match will not be an easy one however. A cursory glance at Georgians who have plied their trade in this county shows that they have produced some tricky players in their time, Kinkladze played with Manchester City, Ketsbaia played with Newcastle, and Nemsadze played with Dundee late on in his career. From the current Georgian squad, Zurab Khizanishvili plays with Blackburn after spells with Dundee and Rangers. He is partnered in defence by AC Milan’s Kaladze. The danger man up front will be another former Rangers man, Shota Arveladze. Georgia’s coach, Klaus Toppmoller, will have unhappy memories of Hampden, he was coach of Bayer Leverkusen when the lost to Real Madrid at Hampden in the European Cup Final five years ago.

As I said, this will not be an easy game for Scotland, clearly something of a baptism of fire for the new Scotland coach Alex McLeish, who faces an away match in Italy (on Wednesday) for his next match. I think Scotland can win tomorrow, but it will be difficult. In some ways this will be a tougher test than the Italy game on Wednesday, in terms of getting players into the right frame of mind. I think that Scotland will win by at most 2 goals.

PS: Sorry I haven’t been in touch, been really busy at work, and been too tired when I get home. As for the local elections news, I have had a couple of leaflets which I will hopefully write about soon.
Posted by Allan at 19:47 No comments:

Email ThisBlogThis!Share to TwitterShare to FacebookShare to Pinterest
Labels: Georgia

Hello, and once again sorry for being away from you for so long

There must be some elections due soon. I can’t really put my finger on it. Must be the increase in junk mail, looking for my vote.
So in order to help out any local politicians, there are a few things you should be aware of. I am not happy with the New Labour led executive at Holyrood, or the New Labour led council. Renfrewshire council are in my opinion the worst local council in Scotland, I mean who in their right minds decides to build bin shelters at the front of properties (see here… ). Therefore I am open to see who truly deserves my vote.

So dear candidates, I will read your tatty leaflets, but I will review them afterwards on this here blog (and the other one…). I just ask one thing, expect criticism.
Posted by Allan at 22:08 No comments:

Email ThisBlogThis!Share to TwitterShare to FacebookShare to Pinterest
Labels: HouseRules

At home to Kilmarnock

Big day today in terms of St Mirrens survival in the SPL. While our relegation rivals Dunfermline 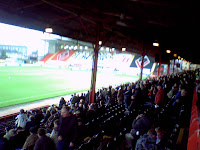 are away at Parkhead (to face Celtic), we have the opportunity to take our lead over Dunfermline from 8 to 11 points. Standing in our way are today’s visitors Kilmarnock.

Previously this season Killie have been tough competitors against us, we have lost 1-0 (at home) and gained a point at Rugby Park (1-1). Indeed on the basis of their performance in October, Kilmarnock remain one of the best sides I have seen this season. Certainly they looked better than the two Old Firm sides when they visited Love Street (pictured).

Burke and Van Zanten will be missing for ourselves today, Van Zanten is suspended for the first time at St Mirren, while Burke has an Achilles injury. I think that it will be 1-1, which will set us up nicely for the trip to Dunfermline next Saturday. That game is a biggie.
Posted by Allan at 12:12 No comments:

Email ThisBlogThis!Share to TwitterShare to FacebookShare to Pinterest
Labels: killiepreview

For the 5th, and final look back at my pick of sporting moments of 2006, i have chosen the pivotal day in the ongoing Ashes test series...

Australia won the second Ashes Test by six wickets and went 2-0 up in the series after bowling England out for 129 on day five in Adelaide. England lost nine wickets for 60 (runs) in 43 overs, with Shane Warne taking 4-49 and key batsmen playing some poor shots.
Chasing 168 to win, Ricky Ponting (49) and Michael Hussey (61not out) shared a third-wicket stand of 83 in 16 overs. Ponting and Damien Martyn fell in quick succession but Michael Clarke joined Hussey to win with three overs left.

No team in history has lost after declaring on a higher total than England's 551 for 6 batting first in a Test. England now face the daunting task of winning two of the remaining three Tests over the next four weeks to tie the series and retain the Ashes urn, won amid triumphant scenes in September 2005.


This was one of the best examples of my theory of sport, that its not about how good you are but how good you are upstairs. For 3 days England dominated this test, England put together a big 1st innings score, Pietersen made 158 while Collingwood became the first English batsman to score 200 since 1936, while Australia were reduced to being 5 wickets down while being still 40 runs away from the follow on target. However on the day of the 3rd day the Australian Captain, Ricky Ponting told his players that he thought that they could still win the match.
It appeared to be a foolhardy claim, until the start of the final day's play. England had to bat out the rest of the day, or set some sort of unassailable target to make the game safe. Though 1-0 behind in the series, England had to make sure Australia did not win.

In reality, Australia cut off Englands supply of runs, starting with using Stuart Clark (who has turned into Australia's player of the series, 21 wickets to date with an average of 16.76 runs per wicket) and Shane Warne (who as i type is in the middle of his last test match, so far he has taken 706 test wickets at 25.35, the world record in test Cricket). For the first half hour it is just survival, runs are at a premium. 6 runs are added when Strauss falls, a leg before wicket that was a bit suspect. A couple of overs later comes the key moment. The new batsman, Collingwood calls for a quick single, and his partner (Bell) is hesitant. His hesitancy is his downfall as he is run out (see picture). Moments later the new batsman, Pietersen tries to sweep Warne, and is bowled. The much seen England batting collapse is on as 73/4 soon becomes 77/5, then 94/6, then 97/7...

England were bowled out just before the tea break on 129, leaving Australia with the gettable target of 168 runs, with 36 overs remaining in the match. When Australia won, wit 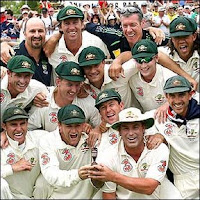 h 3 overs spare, it was a crushing victory, which has sapped any confidence this team may have had in themselves. Australia have proved themselves that once again they are a champion team.

That's not to say that errors have not been made. They were under prepared going into the 1st test in Brisbane, they made errors when picking the team. It has been well documented that they should have picked Reid (as wicketkeeper) and Panesar (for Giles). The choice of Flintoff as captain is also a debatable one, his form with the bat has suffered, even if he has at times looked like the only capable England seamer. His field placings have been questionable, all in all he has looked like someone with too much on his plate (not surprising as he has just come back from injury).

The final score in the 5 match rubberended up with a 5-0 whitewash to the Australians, the first since the 1920's. This match went a long way to deciding the series.