It has been a year since the SNP took over Renfrewshire Council, and while it has been too early to give final judgements, there have been a few mistakes worthy of comment. In the first budget, the SNP/Lib Dem administration made cuts to key public services, in particular…

Predictably the New Labour opposition has pounced on this, dusting off the old slur of the Tartan Tories. OK, this has been a mistake by the SNP administration, but what this spells out to me is that the previous administration have spent beyond their means, and in the process have created a black hole in Renfrewshire Councils funding. It doesn’t take brains of Britain to work out the cause.

New Council Headquarters, including brand new swanky £250,000 paths. Cost to Renfrewshire council taxpayers £20 million
Renovation of Renfrewshire Councils Schools under PPP - £16 million (Councillor Terry Kelly gave this figure during the 2007 council elections), though according to the Partnerships UK website this contract (which will run for 32 years) is worth £194.2 million.

And that’s just the known knowns, as Donald Rumsfeld would say.
During my “discussions” with Councillor Kelly on his blog, I did ask him what New 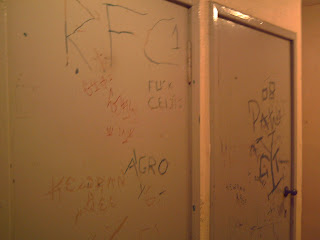 Labour would do to alleviate the budgeting problem which Renfrewshire council clearly has, his answer was to deny that there was a black hole in Renfrewshire’s budget, and to blame it on the SNP policy to freeze council tax. This was before the council leader Derek Mackay said in his Paisley Daily Express column on May 15th that they faced “real financial difficulties”. At least Mr Mackay (& for that matter Mr Salmond) recognizes that there are many council tax payers who are equally in financial difficulties, and that the well of “putting taxes up” to pay for these projects will work or be tolerated so far.

Rather than cut some of the services outlined above, perhaps our councilors should be cutting waste, like their own expenses. My own choice of target, in terms of council services, would be the Community wardens who should be axed next, they might look nice in their shiny red vans but they are far too ineffective against Glenburn ‘neds’, who seem to roam free across the estate (some of their handiwork can be seen above). Getting the police to do their job in this area might be a good idea too.

Update: The Sunday Herald is running an expose on PFI/PPP projects in Scotland. This looks to be a Scottish angle to the stories already running in the news magazine Private Eye.

I heard our fearless leader this morning on Radio 4 being interviewed, he just doesn’t get it! With all the talk of weathering the storm and inflation targets, the one question Humphries should have asked, but didn’t was You ask people to take inflation wage rises, but how do you expect people to survive when wage rises are being wiped out by inflationary pressures? Brown wants people to not have real term wage increases, this will not work.

Apart from that, the thing that struck me was how much he kept on repeating the same mantra “we are making the correct decisions”. Smacks a bit of Blair if you ask me, but obviously they are not making the correct decisions if they deliberately make the poorest, hardest working, in our society even more poor, then in trying to alleviate the situation, still leave 1000000 people worse off than they were. The words backside and elbow spring readily to mind!
One of the problems for the Government is that for too many people, the government is seen as not doing very much while the country slides towards recession, or even as was reported the other day stagflation.
Posted by Allan at 21:59 No comments:

Sorry i haven't been blogging of late. I was away a couple of weeks ago, and it has taken a while to get back to normal.
Posted by Allan at 21:21 No comments: