If anyone needed any more ammunition towards the lacklustre attitude towards regulating the financial services, then the Financial Services Authority provided it last week by welcoming the changes to the regulatory landscape, including the dismemberment and scrapping of the FSA.

In Osbourne’s first Mansion house speech, he laid the blame at the tripartite system of regulation, set up by Gordon Brown.  “No one was controlling levels of debt, and when the crunch came no one knew who was in charge”.  It is a valid complaint about the system, that there appeared to be too many chiefs doing too much, but the problems are as much to do with the culture of the system than the system itself.  Brown’s systems were set up to provide “light touch regulation”.  Whether this meant little or no regulation is open to debate, but this is what the FSA provided.

If we look at the chief causes of the credit crunch, the FSA were absent in advising against 105% mortgages, which several companies were providing.  They did not push for legislation or regulation against these products, which were taken up by many low earners.  The FSA did not issue guidelines against buying re-packaged debt, which included the debt from American sub-prime mortgages.  Many British companies thought they were on to a good thing by buying debt from American companies, and again the FSA was noticeable by its silence on this practice.  Then we come to the FSA’s conduct with RBS.

RBS were involved in an attempt to buy the Dutch bank ABN Amro, alongside the Belgian bank Fortis.  Trying to stop them was Barclay’s, who suddenly pulled out, possibly because the price was too high.  Because there was no guidelines on exposure to American Sub-Prime, heck American Sub-Prime was not seen as toxic debt, RBS signalled its intention to press on with the takeover.  A report on ABN Amro’s debt position was due.  In theory any take-over should have been postponed until this was delivered.  Except RBS, and Goodwin in particular, apparently wanted to seal the deal as quickly as possible.

The FSA should have insisted that the debt report was seen and taken into account before any takeover could occur. There perhaps is an issue with Barclay’s behaviour during the takeover.  Instead of which, the FSA let the takeover which singlehandedly sank the British economy go through, unchecked.  This was the takeover which lead to the Government baling out the banks to the tune of £100 billion pounds, and the takeover which will lead to the cuts in services, in jobs, in livelihoods.

On Tuesday, George Osborne will announce his first budget, which he has dubbed an emergency budget.  When New Labour politicians line up to complain about the cuts and the pain, which they will, we should remind them that the reason for the pain happened on their watch.  They “saved the world”, by giving billions to the banks.  Banks who have shown no contrition and no intention to repay OUR faith in them.  We should remind them of three words which should shame supposed socialists, which appear to have been erased from the New Labour vocabulary.  We should remind them of light touch regulation.
Posted by Allan at 16:00 No comments:

Honestly, do New Labour councellors and MSP's have some sort of death wish this year.

Firstly there's Stephen Purcell's love of Bolivian marching powder, then there's Frank MacAveety's perving at audience members.  George Laird over at the Campaign for Human Right's blog is on the money on this - "Frank McAveety has made a complete arse of himself"

Still, at least he didn't say she was a racist or something...
Posted by Allan at 21:59 No comments:

One of the many ways which the World Cup has permiated the current media landscape is the rant Toby Young had on Question Time on Thursday night, when the current oil leekage into the Gulf of Mexico was being discussed.

For some reason, the actions of the American president in attempting to admonish BP, and in particular their Chief Executive Tony Heyward, for their attempts to clean up the oil leak caused by the aftermath of the Deepwater Horizon explosion and sinking, has annoyed Tory grandees in this country.  What has escaped the attentions of the likes of Norman Tebbett and the other grandees is that this is the worst eco-disaster in living memory, and an economic catastrophe in the making.  In this respect, Obama is reacting how we would hope our leaders would do faced with the same circumstances.

What is rather distasteful though is the cowardly fashion Grandees, and rather shamefully the British press, have hidden behind the impact this will have on British (and US) pension funds.  However you look at it, BP have messed up big time.  They failed to have a plan in place in the eventuality that this might happen, there appears to be no control or penalty clauses regarding their contracts with Transocean and Halliburton.  BP have the appearance of a schoolboy who has discovered that he has forgotten that there is going to be a test, and that he has forgotten to study, such has been their utter ineptitude.

Yet City types and Tory Grandees have been queuing to appear on television to tell us that nasty Obama is a nasty man for being nasty to BP and for putting your pensions at risk (and their investments at risk, which they wouldn’t mention).  How cowardly to use pensioners to try and deflect justified criticism.  In the last 24 hours, a different tack has emerged, that Transocean and Halliburton (the contractors on the rig) are American companies, and should shoulder the blame.  Except as Private Eye reports this week, Transocean (the rig’s operators) relocated to the Cayman Islands in 1999 and then to Switzerland in 2008, while Halliburton (who were contracted to cement the well closed, what a great job they did…) relocated to Dubai in 2007.

You have to wonder whether this would have happened had BP not tried to cut corners and cut costs by axing key safety procedures in the early part of the last decade.  BP have of course been here before, 15 oil workers died, and 170 were injured when the Texas City refinery blew up. Interestingly enough, the person behind those cuts, John Browne, has been appointed to advise on cuts to government spending by the Chancellor.  Be afraid…

Which bring’s us to the foamy mouthed rhetoric from Toby Young on Question Time.  “Yes he has been (indulging in anti-British rhetoric).  The Government has been very wet about this…  Obama has been behaving absolutely disgracefully…  he said he would sack Hayward and has is questioning whether a  dividend should be paid.  The people who will suffer are British pensioners.  When Obama talks about keeping a boot on the throat of BP…  BP stands for British Pensioners, as one in 6 pounds paid out in dividends goes to pension funds is from BP.  This week Obama said he wanted to find out who’s arse to kick.  Well if Obama wants a lesson in kicking arse, i suggest he tune’s in on Saturday evening to see England play the USA, when Wayne Rooney, Steven Gerard, Emile Heskey (?) and Aaron Lennon (?!?) give him a lesson on how to kick some arse (loud cheers)”

It was a thoroughly depressing answer, which revealed much about the supporters of the bright shiny new government we have elected, that the nasty party really hasn’t gone away.  I also imagined many Scottish people throwing their televisions out of the window in disgust.  One wonders whether there was any possibility of a conflict of interest for Mr Young. Whatever the reason for Toby Young’s outburst, it is refreshing to see that the shadowy tentacles of the oil industry have not made their way around Barack Obama’s neck yet.  I’m just not sure whether thats a good thing or a thing to be afraid of.

Malta: A Warning From The Present 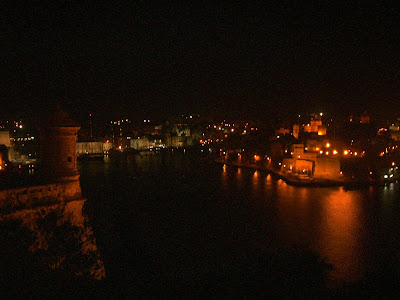 So, last Saturday we were on a trip to see Valetta at night (left), and then on to a secret location (the village of Marsa as it turns out - see below), where there would be a village fiesta and fireworks in honour of the local patron saint.  As things turned out the fiesta was great, as was the fireworks.  Marsa showed that it had more community spirit than the West of Scotland collectively.

As we were heading towards the next pick up, we started talking to our coach driver, about how the Euro had affected Malta since our last visit.  Our first visit to Malta was in October 2007, three months before Malta adopted the Euro.  Then prices were high, but that was down to poor exchange rates between Sterling and the Malteese Pound.  Last week, the near parity of the Euro to Sterling exposed how much dearer prices have become.  This at a time when the world economy is still, despite the protests of economy ministers, the G20, the banks, on the precipice.

Our driver told us that Malta was sold on the Euro on the principle that Malta would be a better off country, in an economic sense, if they joined the European Union.  I don’t know what the no campaign was like, it must have been a vigorous campaign.  The margin of victory was 7.3% for the yes campaign.  What we now see with Malta is what we have seen with other countries, a loss of sovereignty and power with Brussels insisting on the final say over many countries individual budgets.  Ireland were given a warning 3 years ago by Brussels when they proposed cutting taxes, one wonders whether they had any choice over the savage cuts which many right wingers here were urging our (former) government to implement here.  Interestingly the new Chancellor has insisted that the EU would not get a preview of the “emergency budget”. 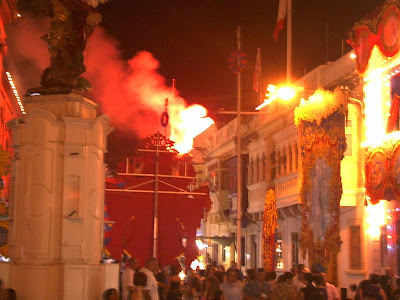 The other problem facing Malta, alongside Greece, Portugal and Spain is the gradual drying up of tourists.  As it becomes more and more expensive to go abroad on holiday, more and more people will decide not to go abroad on holiday, perhaps deciding to holiday here.  If we assume that each plane holds about 200 people each, and that they each have 300 Euros spending money, then each plane contains 60,000 Euros injection into the local economy.  It is this drying up of the liquid economy which is the roadblock to recovery for many countries, this one included.

The interesting thing to emerge from the conversation though was the realisation that Euro scepticism is not some sort of British disease, but that there is a growing awakening of the waste and mismanagement going on in Brussels. A couple of days earlier, The Times of Malta newspaper carried reports that MEP’s voted to increase their staff expenses allowance to a total of 9.4 million Euro’s.  For some, the words “we are all in this together” are just words.  Is it any wonder no one bothers to vote for an MEP.
Posted by Allan at 18:59 No comments: