The Heir to Blair Indeed!

One of the reasons that I voted Lib Dem was that there was a pledge that tax loopholes and tax avoidance would be clamped down on.  Quite how this pledge sits with the news that Phillip Green has been asked to advise the government on how to cut waste is anyone’s guess.  One can only wonder what the Lib Dem “backbenchers” make of it all.

To be fair, Green does pay UK tax on his salary from BHS/Arcadia.  The problem is that this is a company which is owned by Green’s wife, Christina Green, and her immediate family.  Chez Green is not based in the UK, therefore do not pay Income Tax to HMRC.  As a result the UK taxpayer is having to make up a shortfall of somewhere between £400-500 million, with the tax-take on dividends between 2002 and 2004 (when the company stopped paying dividends) and additional £120 million (estimate).

What these amounts to not take into account is the profits made from investments made into and from offshore companies.  According to the In The City column in Private Eye, the original takeover was executed through a Jersey based company called Taveta Investments (sole director, Mrs T Green).  Taveta now owned 92% of Arcadia, with HBOs owning the other 8 %.  In 2005 alone Arcadia paid out £1.3 billion in dividends to Taveta, with a tax liability calculated to be around £360 million.  The Eye reports that this dividend “was only possible because Taveta Investments increased it’s bank borrowings by £1.675 billion.  Most of this was courtesy of a £1 billion syndicated 7 and a half year loan…  just how much of the loan HBOS took is unclear, but it would have been a big slice.  Taveta still owes some £550 million of it back”

The Green’s “earn” £20 million a year, none of which is taxable by HMRC.  As Green himself put’s it “We do pay all our taxes in Britain…  My wife is not a tax exile.  My family do not live in the UK.  It is somewhat different.”  In good times, this appointment would be dubious at best, but in times when a lot of hurt and a lot of pain is going to come the general public’s way, to appoint someone who has not been 100% committed to this country shows a distinct lack of judgement .  However this decision is not the only questionable appointment Cameron has made in his short premiership.

In June 2010, the government appointed John Browne as an efficiency Czar, tasked with identifying efficiency savings and ways to cut public spending.  Browne had been the Chef executive of BP until 2007. It is his cost-cutting programme at BP, which compromised health and safety regulations, which  should put a shiver up everyone’s back.  Those cuts arguably led to two major accidents at BP installations,  the Texas City refinery explosion in 2005 and more recently the Deepwater Horizon explosion, which caused friction between English Tories and American’s as the oil continued to seep into the Gulf of Mexico.  We can only hope that whatever cuts John Browne recommends, that he has learned his lessons from his tenor at BP.

What this does exemplify is that Cameron is developing the habit of not really thinking about his appointments and advisors.  This is a trait he shares with, of all people, Tony Blair (I’ve just noticed as well that Browne’s title is the rather Blairite “Efficiency Tzar”).  Remember the various people Blair would schmooze with?  We also remember the way Cameron touted himself as “the heir to Blair” in around 2006.  What is surprising is how quickly, and with so much gusto, Cameron has adopted some of the Blair hand book.

The Case For The Council Tax Freeze 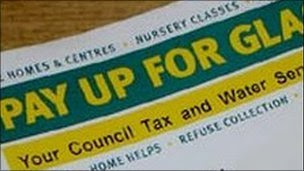 If you look at the media, the case for the lifting of the current Council Tax freeze is irresistible.  Even one of Scotland’s leading bloggers, Jeff SNP TV,  has said that Iain Gray is right when he called for the scrapping of the Council Tax freeze.  Glasgow City Council’s main argument is that if the freeze is not lifted, then front-line services will be at risk of being eroded, or worse, axed altogether.

It’s not just Glasgow City Council that is hoping that the green light for Council Tax increases will cover up past and current mistakes.  One of the interesting nuggets to come from the Independent Budget Review is the figure £800 million.  This is an estimate of the amount that all of Scotland’s local authorities will pay this year servicing their PFI/PPP debts.  In effect that is an estimated £800 million disappearing from Local Authorities budgets, never to be seen again.  No wonder there are problems with finding work for teachers.  The next figure I have for you is £44 million.  That is the amount Scottish Local Authorities pay in “consultancy fees” – this one was picked up at an anti cuts meeting, I think that the UNISON rep gave me that one.  So Councils pay people a combined £44 million to tell them what to do (Renfrewshire’s share is about £1 million, again source UNISON), can anyone tell me why we vote for them?  No?  Gordon Matheson is definitely struggling to justify his £60,000 salary then.

Forgotten among the political posturing is us, the poor saps who have to shell out to pay for all of the glorious largesse.  The Councillors, the local authorities group UNISON, and New Labour seem to have forgotten that we are still in a recession.  The price of food is still going up.  The price of fuel, one suspects, will go up once again over the winter, powering a rise in inflation past its current mark of 3.1%.  VAT is due to go up in January.  The price of public transport is set to increase as well, and to cap it all there are rumblings of an increase in interest rates.  With all of these price rises, where, one wonders, do our Councillors, COSLA & Iain Gray think that ordinary Scots are going to get the money to afford a council tax hike.  And it will be a hike.  Under New Labour, and then successive New Labour/Lib Dem administrations, Council Tax has gone up by an average of 47% between 1997 and 2007.  Yet it was noted that Band D council tax is 20% lower in Scotland than it is in England.  I wonder if COSLA have noticed this despite backing Glasgow City Council’s plan for a 3% rise.

In this light, a council tax rise will add more pressure to hard pressed people & families, already struggling with rising bills from other quarters.  It might not be an exaggeration to say that there might be blood on the hands of councillors if this goes ahead.  For what, to bale out councils who refuse to get real and properly cut their cloth’s.  This post and last should contain enough example’s to make you wary of the arguments put forward by the likes of Pat Watters, Gordon Matheson and Iain Gray in favour of the removal of the Council Tax freeze.  For Iain Gray to advocate this measure, he should be ashamed.  Labour used to have a reputation for standing up for the poor.  New Labour now only has a reputation for burying the poor.  Final proof that hollow class sloganeering will only get you so far.
Posted by Allan at 15:00 No comments:

There was a book that came out by the Canadian author Naomi Klein a couple of years ago, “The Shock Doctrine”, where Klein argues that free market “reforms” have been pushed through while countries have been reacting to events, disasters.  It is hinted in the book that the Falkland's War was such an event (though it wasn’t the war itself that led to the reforms, more the 140+ majority in the following years election).  Countries reacting to extreme events having to undertake unpopular “reforms”, hmmmm…

It was this which came to mind last week with the publication of the Independent Budget Report, the panel was led by Crawford Beverage the former Scottish Enterprise chief executive.  The review, which has been compared to the original Beverage Report which recommended what became known as the Welfare State, even quotes the original by saying “The first principle is that any proposals for the future … should not be restricted by
consideration of sectoral interests.”.  Yet I think that this is exactly what this report does.

Lets take for example the future of Scottish Water.  The Scottish Futures Trust have been lobbying the government hard for the privatisation, mutualisation or otherwise of Scottish Water.  The report states, dryly, “…we are of the opinion that alternative models should still be considered…  which should permit the release of significant capital to the Scottish Government for other projects while allowing the attraction of private investment and the return of any surplus to the public benefit”.  As an exercise in looking at how government is expected to get through the recession, is fair enough.  As a report into how the country is to get through, those paragraphs are pitifully inadequate, and does not explain why normal Scottish people should put up with increases in their water bill and a decrease in the quality of service just to fill a hole in the finances.  We might not be able to afford not to shift Scottish Water from the public finances but we cannot afford to de-nationalise Scottish Water.  In this respect, it will be interesting to see if it is still New Labour policy to keep Scottish Water nationalised.

Another issue where action is as unaffordable as no action is the current Council Tax freeze.  It is noticeable that the councils and the council’s organisation COSLA has been lobbying hard for the abolition of the Council Tax freeze, saying that council services have been suffering because of the freeze.  The real reason for the council’s lack of money will be the PFI bills for all of the schools built & renovated  between 2003 and 2007, the report estimates that councils will spent £800 million alone on PFI/PPP re-payments for this year .  Council’s have not necessarily made the best choices over the past couple of years either, whether it’s the £278,000 pay offs to former employees or giving inflation busting pay rises to heads of service or even the £40 million councils pay to consultants, councils are hardly in a position to be pleading poverty.  It is noted in the report that Band D tax rates in Scotland are 20% lower than in England (£1,149 versus £1,439)  one hopes that this figure doesn’t catch the eye of COSLA.  A council tax hike of 20% will pit even more people into financial trouble.

The lessons here though are give an economist a centimetre and they will give you the cost of everything, but the value of nothing.  Almost every item has been costed, and with the exception of Care for the elderly and the proposal to reform the free transport, the value to the general public has been looked into.  With every proposal, only the monetary cost has been researched, with the knock on effects of cuts to public services, changes in the status of Scottish Water etc…  With private companies lining up to take over public services down south, this report sees the possibility of the same thing happening here.  There are cuts that can be made to public services.  Unfortunately, this report follows the lead of Osborne and goes for the cut which will harm those that are not wealthy.
Posted by Allan at 16:30 1 comment: