The Pound In Your Pocket

You may have noticed that the Governor of the Bank of England, Mark Carney, was in town today.  This appears to have caused the twittersphere to explode with claim & counter claim.  The funny thing is, Carney’s speech was – on reading of the edited highlights – remarkably dry and neutral.  There is something for the Yes campaigners to be happy about, and there is something for the No camp to be pleased with too.

Yes campaigners will be happy that Carney did not come north to say there would be no “Sterling-zone”.  Indeed Carney echoed many of Salmond & Swinney’s arguments in favour of going down this particular route.  “Sharing a currency can promote investment by reducing uncertainty about currency movements and giving businesses access to deeper, more liquid financial markets. It can also reduce borrowing costs for countries with a history of high inflation and currency devaluation. By tying themselves to the mast of the monetary policy of others they can import credibility”

By some curious twist of fate, these passages somehow passed the Better Together side by.  As if there were no benefits of a shared currency.  Of course, a large amount of the politicians speaking for “Better Together” would have taken us into the disastrous Euro project… so no disingenuousness there.  Just an awful lot of re-writing of history.  In a similar fashion, the passages outlining the cons of “Sterling-zone” seem to be absent from the minds of “Yes Scotland” backers.

“As the Presidents of the European Council, European Commission, Eurogroup and European Central Bank argued in their report, European monetary union, which has so far relied on fiscal rules, will not be complete until it builds mechanisms to share fiscal sovereignty…  Whatever is ultimately chosen, the degree of fiscal risk sharing will likely have to be significant. 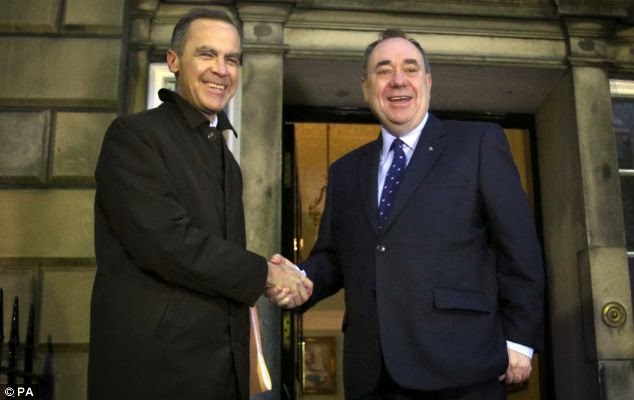 What this means is that there would have to be some sort of fiscal pact, with rules potentially governing tax, government spending, borrowing and debt.  The SNP’s “flagship” policy of a 10% Corporation Tax rate would be destined to remain in the launch silo for as long as this arrangement was in force.  As for other possibilities, Osborne’s  liking for a Eurozone fiscal treaty (which would not apply to the non-Eurozone UK) could be seen as a sort of dry run for Sterling-zone negotiations.

Much of the “Better Together” campaigners have claimed that Carney’s speech torpedoes any chance of there being a “Sterling-zone”.  I don’t think it does, but this policy – daft as it is – is being diminished by a thousand cuts.  It might be in the best interests for the post “yes vote” British Isles, but I don’t think it’s in the best interests for post Indy Scotland.  Except when “Better Together” unfurl this argument, they somehow miss this point.

This illustrates perfectly the problem with Salmond’s campaign.  There are common sense & credible policy positions on the EU – that it is an aspiration to join the EU but that we would not be joining until the Scottish people consent to it.  The equivalent currency position would be to continue to use the Scottish Pound – tacked to the Pound Sterling – and to seek to establish a lender of last resort at the earliest possibility.  All of the “yes” camp’s troubles come from the bad policy decisions taken over these issues.  For Better Together, these issues are the gift that keeps giving.

What is symbolic is that Carney has somehow managed, among all the heat and bluster, give a sober assessment of the pros and cons of Salmond’s Sterling-zone wheeze.  Yet without really trying, Carney has shown up the inherent prejudices and preferences we all have on the subject of Scottish Independence – supporters, politicians and of course the Media.  He’s also shown what a blinkered lot the zealots on both sides are. No wonder the undecided’s – like myself – are growing.  In short, in nearly three years of campaigning, Carney’s speech was the first sensible contribution to the debate.
Posted by Allan at 00:30 No comments:


There is now 8 months to go before Scotland’s Independence referendum. Time is now beginning to run out for those campaigners for Independence, who are still seeing polling figures showing large leads for the Better Together camp.

It might be that the release of the White Paper is still to peculate into the Scottish consciousness, and that this document is more of a slow burn than anyone realised.  At the moment though, the White Paper has not had the impact that the “Yes” camp needed.  All of which has seen more prominence in the Macblogosphere of the latest straw being clutched at, this relating to the 2011 Holyrood Election.

Polling at the start of that year showed that “Scottish” Labour were on course to regain power and that Iain Gray was highly likely to be the next (at that point) occupant of Bute House.  Yet as things turned out, Gray was on the end of “Scottish” Labour’s biggest defeat post war as the SNP won a working majority.  It was essentially, in the terms of Holyrood politics, “Scottish” Labour’s own 1983.

Supporters of Independence point to the polling at the start of 2011 and say that if the SNP can turn around a deficit like that, then overturning the deficit faced by Yes Scotland can also be done.  There is also a subtext here that many SNP supporters suspect that the polling evidence then was, in short, duff and that the current polling numbers are equally duff.  There are reasons for the SNP’s resurgence during that campaign, but they are reasons that will not be replicated this year.

I rather suspect that the polling up to as soon as February was asked of people still thinking about the previous years Westminster election.  As soon as the Holyrood election veered into view, the SNP’s polling improved.  However, that doesn’t tell the whole story.

It could be argued that there were two big outside factors in the SNP’s win, the collapse in support for the Lib Dem’s and “Scottish” Labour’s shrill & patronising campaign.  Starting with Labour’s campaign, it started badly – at a collage in Dumbarton when the fire alarm went off half way during the launch – and got worse from there, culminating in Iain Gray running away from anti cut’s protesters in Glasgow Central train station, and taking refuge in a nearby sandwich franchise shop.  It was this incident that cemented Gray’s fate.

In sharp contrast, the Lib Dem’s went about their ways, oblivious to the punishment beatings the Scottish electorate were going to hand out .  They saw their FPTP votes drop by half from 2007, while a drop of 127,199 voters saw the  Lib Dem’s list allocation drop to 3 seats (out of their total of 5).  All because of Nick Clegg’s decision to prop up a minority Tory government.

Essentially the SNP held their position and were in a good position to attract voters when the Lib Dems & Labour campaigns tanked.  So what are the parallels then?  Well, for one thing the Better Together campaign is not the most inspiring campaign, it seems to be build around holding the default Scottish “pro-union” position. Indeed campaigners within Better Together have shown how much of an irony free zone their group is by dubbing their campaign “Project Fear”.

If any comparison can be made, it is more the SNP campaign with Better Together.  Both campaigns come from a position of incumbency and strength.  The SNP Government in 2011 had that incumbency factor, while as I’ve hinted at earlier Scotland’s default position is still pro-Union.  Both campaigns also saw opponents win varying degrees of disarray.  While this helped Salmond in 2011, it has not helped that his own Yes Scotland campaign has not been as successful and seen several policy points exposed.  Most notably with Salmond & Sturgeon’s stance on EU membership/entry and their preferred option of adopting the English Pound as our currency.

Claims that the referendum campaign will follow the same path as the Hollyrood election three years ago is on the face of it straw-clutching in the extreme.  However, should the Better Together camp implode, there have been lets just say tensions between the parties, maybe we could find ourselves going down that path.  For the moment though, Yes Scotland are still searching for those snookers.