Five Reasons Why George Is The New Gordon

1) The Length of the Speech – When I were a lad, and there was no television pictures from inside the Commons chamber, the budget would still be taking place when i came home from school.  Most speeches from memory tended to last between 75 and 90 minutes.  Since New Labour came to power, budget speeches tended to be party political and only last about an hour.  This trend has continued under Darth Gideon. 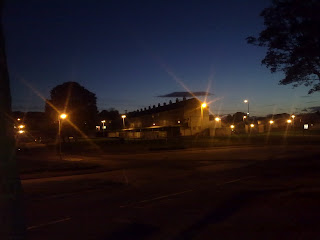 Mr Alexander is right, actions not words are needed for Glenburn and for Paisley. Unfortunately all we have had from council administrations of both colours is lots of hot air and lots of inaction.
Posted by Allan at 10:00 1 comment:

There is one question which has not been asked in among the lightless heat of the plebiscite exchanges either in the media or in the MacBlogosphere.  That question is what will happen after the referendum?

Of course it all depends on what the result is.  Should Scotland vote “Yes”, then apparently we will glide seamlessly towards Independence, taking our place in the world as an independent country, while we would be looking to joint the EU.  Apparently.

What prompted this post was an article in the Fail on Sunday which claimed that Cameron would block entry to the EU for an Independent Scotland. Yes, I know the Mail on Sunday, a publication, which if you look at the Tabloid Watch blog in my blog post has a record for accuracy and reasoned argument.  Ahem….  It was enough to get me thinking that whatever happens, the United Kingdom will not be the same again.

So according to the SNP supporters in the Macblogosphere, once we vote “yes”, we will glide serenely towards Independence.  So much so we will not notice what all the fuss was about, except I think that things will be rather more fractious.  I also think that the SNP supporters in the Macblogosphere have seriously underestimated “Flashman” Cameron & “Darth Gideon” Osborne.  I suspect that if the Mail on Sunday story is true, that entry to the EU will be the least of the SNP’s problems while negotiating Scotland’s exit from the Union. Assuming, of course, that the SNP don’t take the hint and make joining the EU subject to a referendum.

The main sticking points will be over oil, and the share of the deficit, while the SNP’s policy of adopting Sterling (as opposed to setting up a Scottish Pound tacked to Sterling) and keeping the Bank of England as the bank of last resort (as opposed to setting a timetable for the setting up of a Scottish Central Bank – not called the Bank of Scotland) will not go down well with the unionist negotiating team.  All of these area’s are difficulties, and I am sure that Cameron & Osborne will try and gain some sort of revenge for a yes vote through the independence negotiations.

Maybe the biggest change post Independence will be the fate of the SNP itself.  Since Salmond returned to the leadership of the SNP in 2004, they have invented a cool tartan version of New Labour – which has been much more successful electorially than “Scottish” Labour.  Partly this calculation is down to aping the success of Blair, but partly this is driven by the same motive for Blair, Brown et all creating New Labour – pragmatism.  Salmond’s pragmatism comes from selling the SNP to a left of centre audience, while retaining a lot of natural supporters of Independence who believe in Neo-liberal policies like low Corporation Tax rates.  The question is, will there be a split, or will the good ship SNP stay together holding a centre/left position.

So if there is a yes vote, things will be difficult.  So will things be easier with a no vote?  Well, no.

There are already rumblings about the demise of the Barnet Formula coming from the back benches.  The consensus from Westminster (and by the way, that includes Labour members too) is that the current Scotland Act (based on Calman) should be the final word (for the time being) on any further powers coming north.  There have even been mutterings about repatriating powers to Westminster by certain “Scottish” Labour politicians.  The consensus here in Scotland is that Calman does not go remotely far enough with the majority of voters favouring “Devo Max” (essentially Fiscal Autonomy with powers stopping just short of full independence) at the very least.  This fact does not appear to have entered the consciousness of our pro-unionist elected representatives.  If it has, it is dismissed patronisingly as some sort of safety net for the SNP to fall back on

While the questions about what will happen to the SNP will begin after a referendum loss, what would be a more pertinent question would be where now for “Scottish” Labour.  They have set their face against the settled will of the Scottish people so much, in depriving us of Fiscal Autonomy, that to see off Independence from centre stage would expose the policy vacuum that lies at the heart of “Scottish” Labour.  A “no” vote in effect would be a pyrrhic victory for “Scottish” Labour, coming so soon before a crushing Cameron victory at the next UK General Election.

While the next two and a half years will be dominated by the plebiscite, it will be what happens after that event that may see a shaking up of the kaleidoscope, at a time when the country as a whole is still taking George’s not so marvellous Medicine.
Posted by Allan at 11:00 3 comments:

You know, the idea behind burying bad news is that bad news is buried under a huge news story.  Yesterday's announcement that the SNP will begin their arguments for independence in May felt a bit like sneaking the news out while everyone was looking at the man formally known as Saint Vince.  It's bad news for SNP supporters on two counts.

Firstly the upcoming council elections will be even more under the shadow of the forthcoming plebiscite, as a result they will take on the feel of full blown military manoeuvres.  The other is that we have about 8 weeks more of the frankly flim flam arguments we have had over the past couple of weeks.  Mostly concerning every "Scottish" Labour spin doctor's favourite bunny - Joan McAlpine MSP.

Ms McAlpine first achieved notoriety (well, post her "thoughts" during "Scotland's Best Album") with her tweet "Last poll had SNP on 51%, perhaps because of the negative anti-Scottish behaviour of the unionist parties".  Cue pandemonium as politicians from all sides bristle at being called anti-Scottish while not bothering to think about whether siding with the Tories and agreeing with absolutely everything they said might not actually make them look anti-Scottish.  But hey, why think about that when being offended is the new black.

For her next trick, Ms McAlpine made me go on to the Daily Record's website.

But really, the next trick was to pen a column for the Record, which the failing relationship between a married couple was used as a simile for the relationship between Scotland and the rest of the UK.  This time cue pandemonium across the Macblogosphere as Kirsty at Better Nation towers and televisions own Caron focused in on the phrase "Eventually she recognises the relationship for what it is – an abuse of power”.

From a certain point of view, this phrase could refer to domestic abuse.  There are many levels of domestic abuse, not only the physical type.  In this respect the timing of the article was not the best.  On the other hand, bearing in mind that to many Scottish voters who have had more than a passing knowledge of Scottish affairs and know about Crone's report in the mid 1970's - this phrase almost perfectly describes Scotland's position.  A better description would have involved the "husband" falling in with new friends and changing beyond recognition as "Margaret", "John", "Tony" and "David" exerted their influence on the chap.

As "Planet Politics" Stuart points out, "abuse of power" is different to "abusive relationship" or "domestic abuse", so the shrill hectoring falls down on that score (Stuart, does also point out the ignored flaws in Ms McAlpine's article).  Yet the point is that once again an otherwise innocuous piece (which carries the inherent flaws in Salmond's vision) is shouted down as the arguments descend into a he said she said shouting match - which leaves those undecided in the middle feeling ignored.  One hopes that in the middle of all this screeching and shouting, to paraphrase the Glaswegian joke, in the middle of it all a sensible debate about our future starts.
Posted by Allan at 20:30 2 comments: