Some Thought’s About That Opening Ceremony

The Games of the 30th Olympiad opened last night in Stratford with a ceremony which gathered much acclaim.  There may well be posts on the Olympics, but these will appear on the brother blog to this, Fan With a Laptop.

Before I go on I must confess that i thought that firstly Paris should have won the bid for these games.  When London won the bid in July 2005, i thought that the opening ceremony would be a horribly anglocentric affair.  City gents with bowler hats and other symbols of Englishness would be at the fore.  Even the pre-ceremony blurb sounded like John Major’s “Cricket on the green…  warm beer…  spinsters on cycles” speech brought to life.  We were wrong.


Boyle’s vision was astonishing, and somehow managed to be British without very much of a hint of Anglocentricity.  The Pandemonium section had so much going on, that a second look is probably obligatory.  The voguing “corks” (mill owners) were rather surreal, while I'm still trying to work out where the chimney’s came from.  The part with the suffragettes looked similar in style to Paisley’s own “Sma Shot” day, and was one of the many pokes in the eye to our current government. A theme picked up on by the Tory MP Aiden Burnley.

The most “offensive” part for Mr Burnley (and one suspects to the visiting US Presidential candidate Mitt Romney – considering his opposition to “Obama-care”) was the open love letter to the NHS and to Great Ormond Street Hospital – both touted as great British achievements in the teeth of continued opposition.  Burnley’s rant on the twittersphere came after the appearance of the SS Windrush, dubbing the ceremony “multi-cultural crap” and “the most leftie opening ceremony I have ever seen”.  This morning he seemed to dig himself into a deeper hole by completely marginalising the biggest selling musical genre in the past decade.  Rap and R&B stars have created the biggest selling records of the past 10 years, our “Grime” stars are making the kind of waves in America that many Brit pop bands failed to do, while American R&B records increasingly sound like British dance records from the mid 90’s.  Why wouldn’t that be celebrated by the guy who worked with Leftfield (on the soundtrack of “Shallow Grave”) and picked Underworld & New Order (among others) for the soundtrack for “Trainspotting”.  Jeez, Danny Boyle even made Mr Bean funny for one night.

Taken as a whole, it wasn’t some sort of lefty paradise, but rather cleverly picked the good things that make us British, it was great to watch one of these things and get the small cultural references, which I think only the French were sniffy towards.  The “Bond with the Queen” skit was unexpected and good (even if Brenda spoiled it afterwards by failing to crack a smile during the rest of the ceremony), while I commented on Bean earlier.  The only duff notes were struck by McCartney and maybe the Arctic Monkey’s – both were slightly out of kilter with the rest of the ceremony.

For a resolutely small p political ceremony, maybe the most interesting thing to say was that it was probably a much better advert for the Union than anything “Better Together” will throw at us over the next two years, and portrayed a cool version of Britishness that the SNP will fail to rebut.
Posted by Allan at 16:30 1 comment:

We Need To Talk About George...

With the summer recess (recess?  Surely break?) coming up speculation is building about  David Cameron’s first planned ministerial re-shuffle.  Among the names being touted for reshuffle is a surprising one.  That of the Chancellor George Osborne. 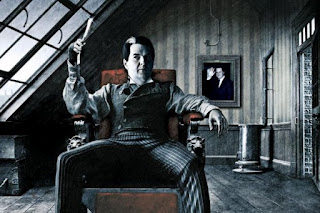 While I fully expect Osborne to stay in his position up to at least the next Westminster Election, it is however worth looking at the reasons why he should be removed from his position.  It is his own “Scorched Earth” policy (a policy of deep cuts intended to lower the structural deficit but has – as predicted – utterly destroyed any chance of growth) that has done more harm than good to the UK economy.  It is worth noting that Osborne’s main cheerleaders when he became Chancellor now advocate some sort of “plan B”.

While there is a current lull in the Independence/Union referendum campaign with arguments raging about geeky uninteresting points of order, there has been a call for another referendum.  This time on the thorny subject of “Gay Marriage”.